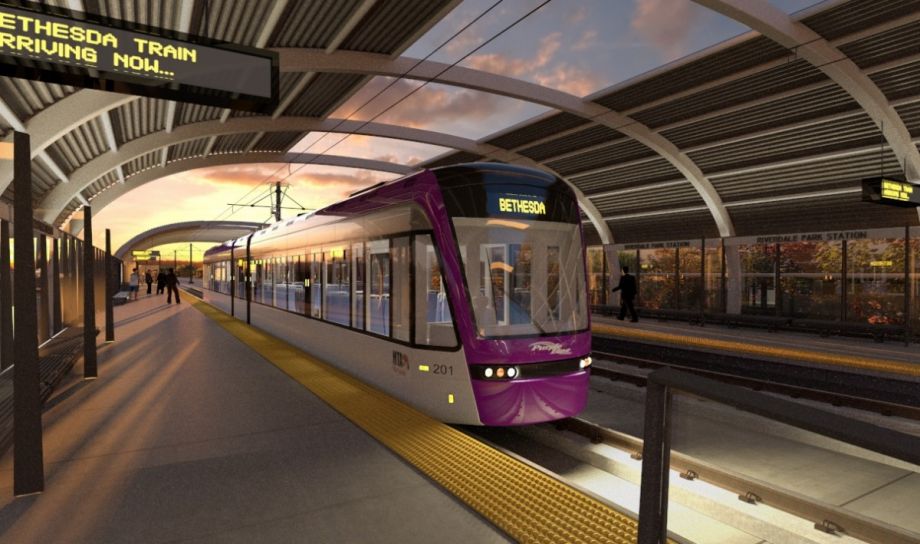 Maryland Transportation Secy. Pete K. Rahn has said that the Purple Line could be built for less than the $2.45 billion estimate. (Credit: Maryland Transit Connectors)

Maryland Governor Tips Hand on Purple Line
In the middle of a hard tussle with the Democrats that control the Maryland legislature over the shape of the fiscal 2016 state budget, Republican Gov. Larry Hogan gave a strong signal of his likely decision on whether to allow the proposed Purple Line cross-suburb light-rail project in Montgomery and Prince George’s counties to proceed.

Although the Washington Post story on the budget fight said that “aides to the governor insisted he has not yet made a decision,” remarks Hogan made in an interview with the Post on Friday strongly suggest that barring changes of some sort in the project, the answer will likely be “No.”

The Post reported that the governor said the line’s $153-million-per-mile price tag is “not acceptable.”

“Two miles of that would fund our entire school construction for the entire state,” he said. When asked what would be an acceptable cost for the line, he replied, “It would have to be dramatically lower than that.”

State Senate President Thomas V. “Mike” Miller Jr. told the Post that Hogan told him the day before the interview that he would likely make a decision sometime in the next two weeks. Miller arranged a meeting during that two-week window at which county executives will make last-ditch pleas for the project.

Maryland Transportation Secretary Pete K. Rahn has said that the light-rail line from New Carrollton to Bethesda could be built for 10 percent less than the original estimate of $2.45 billion, but it’s not clear whether that would be enough of a cost savings to please the Governor. Backers tout the line as an economic development tool for the communities along its route that are not served by the Metro; critics claim the economic development benefits are overstated and that the money would be better spent on roads and bridges. In his campaign for governor, Hogan himself was one of those critics.

Brussels Steps Up Pace of Pedestrianization
Car-free streets in a number of city centers have created engaging and popular public spaces without snarling traffic. The Belgian capital of Brussels is so pleased with the success of its current central pedestrian zone that it has put its plan for a huge expansion of that zone on the fast track to implementation.

Eltis.org reports that Brussels will begin its previously announced plan to double the size of its car-free “comfort zone” on June 29th, ahead of schedule, when the Boulevard Anspach and adjacent streets on either side will be closed to cars from De Brouckère to Rue de Lombard. The only exceptions will be residents with their own garages, emergency service vehicles, and delivery vehicles from 6 to 11 a.m.

More of the streets just beyond the zone that will remain open to traffic will be converted to one-way travel, with parking spaces removed in some places for conversion to bike lanes.

“We will remove parking places as previously planned,” Brussels Mayor Yvan Mayeur said. “On the main roads, they will be converted into cycle lanes in many areas. To allow residents to keep their cars, we will seek to agree special privileges for residents with developers who build underground car parks.”

The pilot closures will remain in place for eight months until the city undertakes permanent pedestrian zone improvements.

Cool Development in Power Supply
The International Railway Journal reports on a breakthrough that could result in significant energy savings for electrified rail transit systems running on DC power.

The test was conducted on the 20-km (12.5-mile) Sunzu Line of the Izuhakone Railway, which is electrified at 1.5 kV DC. A cable cooled to -196 degrees Celsius was used to connect AC-DC transformers at a substation to the traction power supply system.

The RTRI says that superconducting wire could lead to significant energy savings for rail operators because of its low electrical resistance. That in turn means greater voltage stability, which matters on DC power supply systems because voltage drops as distance from the substation increases. Those voltage drops also mean that regenerative braking systems can’t perform at maximum efficiency; current they feed to the power supply system is lost unless a train is nearby to use the power. With superconducting wire, this is no longer necessary, increasing the usefulness of regenerative braking on DC-powered rail lines.