Hoboken Mayor Stands With Paris (and Pittsburgh) – Next City 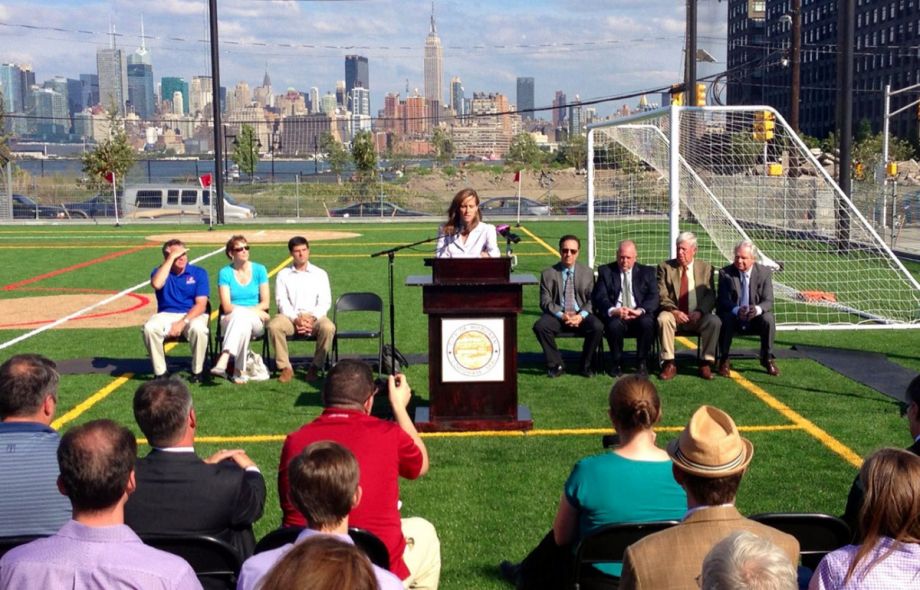 Hoboken Mayor Dawn Zimmer at the opening of a new park at 1600 Park Avenue, the first phase of a planned 4-acre park along the waterfront in northern Hoboken (Credit: City of Hoboken)

Hoboken Mayor Dawn Zimmer knows climate change is real; she lived it, leading the city of 53,000 through a hard-won recovery from Hurricane Sandy into a period of sustained growth. For her leadership in the turbulent days and weeks after the storm pummeled her city, Mayor Zimmer was appointed to President Obama’s Hurricane Sandy Rebuilding Task Force. Today, Zimmer became one of nearly 100 U.S. mayors who has pledged to uphold the Paris climate agreement even as President Donald Trump withdraws. We spoke about her decision to stand “with Paris, Pittsburgh, and cities and states across the country as we recommit ourselves to work even harder to uphold the Paris agreement.”

Throughout your time as mayor, you’ve made adapting to climate change and reducing greenhouse gas emissions priorities, consistently saying that local, state and federal government must not bury its heads in the sand but instead must “craft real solutions.” In the wake of President Trump’s decision on withdraw from the Paris accord, what are the “real solutions” that Hoboken will continue to pursue?
In the absence of federal leadership, states and cities will lead the way to a more sustainable future. In Hoboken, we are continually making our streets safer to encourage active transportation like walking and cycling, which complements our 57 percent mass transit commuting rate – the highest in the country. For example, this summer we are expanding our already successful bike-share program with additional stations and bikes, and our roadway projects are based on complete streets principles to make our roads safe for all users. Construction is already underway to install the first components of what will become an electrical microgrid that incorporates distributed renewable power sources to support our critical infrastructure. We are prioritizing the expansion of green infrastructure and open space, recently acquiring land for over 8 acres of resiliency parks that will include rain gardens, bioswales, and underground detention systems to mitigate flooding. For the next year, we will host two AmeriCorps VISTAs who will help to maintain our expanding green infrastructure and provide green jobs training for low-income residents, demonstrating how sustainability is completely consistent with a strong economy. In redevelopment areas, we require LEED certification for new construction, and we launched a Solar Challenge to make it easier for homeowners to go solar. In addition to direct actions that the city can take, we also work with our Green Team, to recognize environmentally friendly local businesses through the Green Businesses program and to promote sustainable lifestyle choices through our annual Green Fair.

Mayor, is it possible to work on the environment, economy and equity all at the same time parallel? Or do you find that it’s better to lead in with one and then that has spillover effects that can snowball and then you can get to the others?
I am always thinking about them all at the same time. For example, with our Rebuild by Design project and improving our resilience against flooding, the equity issue ties in. One of the co-chairs of our community advisory group for Rebuild by Design is a housing authority resident and she’s been a very powerful advocate. And having her come to the meetings and say, this is really important to the housing authority and for protecting residents against another Sandy.

A concept for a resilient park that doubles as coastal protection (Credit: Rebuild by Design)

As the mayor and a leader in a city in the shadow of New York, but a city that continues to change, what are you doing to ensure that Hoboken remains the place you originally chose, while accommodating the fast-paced growth that’s happening?
Hoboken is a very special place and I do believe that small is beautiful. We’re 1 square mile, but we’re actually more densely populated than New York City so we have the urban challenges that a big city like New York faces. One thing I believe is that every resident should be within walking distance of a park and I’m extremely proud that just last year we acquired 5 acres and we’ll be building the city’s largest park — a “resiliency park” with a 1 million gallon underground stormwater detention system. Through a development process we’re adding another 2 acres on the western side of the city and we’re acquiring another 2 acres. So by completing that process, every resident will be within a short walking distance of a park.

We also implemented bike-share. We did that in a way very different from New York City. … My focus was I want everyone to be within a five-minute walking distance of a bike-share station. So it’s citywide. We have 12,000 members. People are riding over to PATH, riding over to the ferry and back. And so you’re just seeing those bikes getting tremendous usage, over 160,000 rides so far since we’ve started in the last two years. So those are the kinds of things that we’re trying to do and make Hoboken an even more connected community. 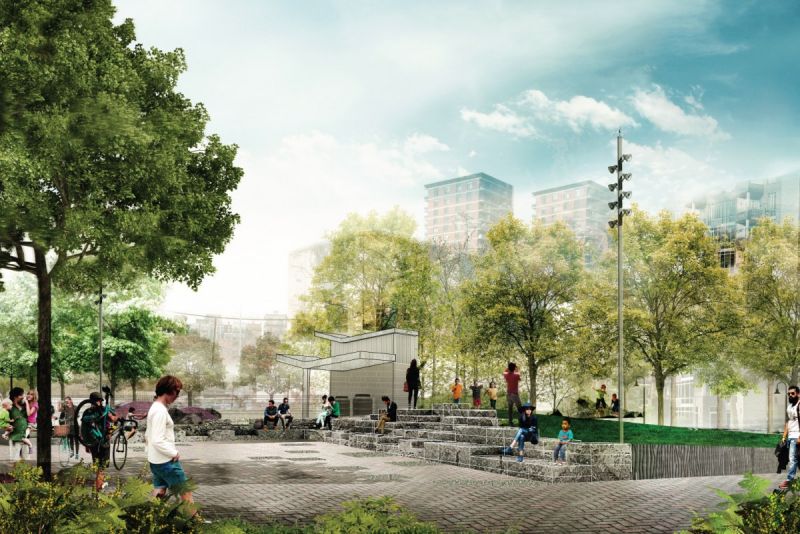 This rendering shows Hoboken's Southwest Resiliency Park, which is now under construction. (Credit: City of Hoboken)

You’ve had to deal head on with obviously a number of major challenges, including affordable housing, equitable development and climate change. Can you share a lesson you learned in the course of addressing one or more of these challenges that might be useful to other mayors seeking to advance sustainable urbanization?
To me it’s really important to do development in a way that it is sustainable, that you focus on looking at the traffic implications, the flooding implications, and you focus on bringing more affordable housing. This is one where we’re continuing to fight because there is pressure, pushback and lawsuits against creating affordable housing in a way where you combine the fair market value with the affordable. But I think it’s the future and it’s the way that we need to get it done. We’re continuing to not accept no for an answer. We are also working on improving our energy resiliency and again, not accepting no for an answer. We are finding new ways to fund [energy resilience programs].

Now let’s talk about these issues as they relate to international policies and diplomacy. You have the New Urban Agenda, which is a very qualitative and very explanatory blueprint for change. And then you have the Paris climate accord, which was very concrete and measurable, and the Sustainable Development Goals, which include indicators and targets. Is it helpful to have targets and indicators that identify sustainability? Or do you think that each city is different and therefore cities themselves should be developing these targets and indicators?
You know that’s something I have to take a closer look at. At the end of the day, each city potentially needs to make their own decisions. But looking at [other city plans and data] provides an overall framework that I think can really help.

Our focus has been on resiliency. We’ve had disaster after disaster and massive financial challenges too. … We had a hospital that was funded by the city and going bankrupt and could have taken us financially underwater. And so my first challenge was getting us back on the financial track. Since then it’s been about Sandy and flash flooding. Now it’s the water mains and the lack of investment in water mains. But I recognize that we need to do a lot more to set our own goals, and knowing what other communities are doing, that’s extremely helpful.