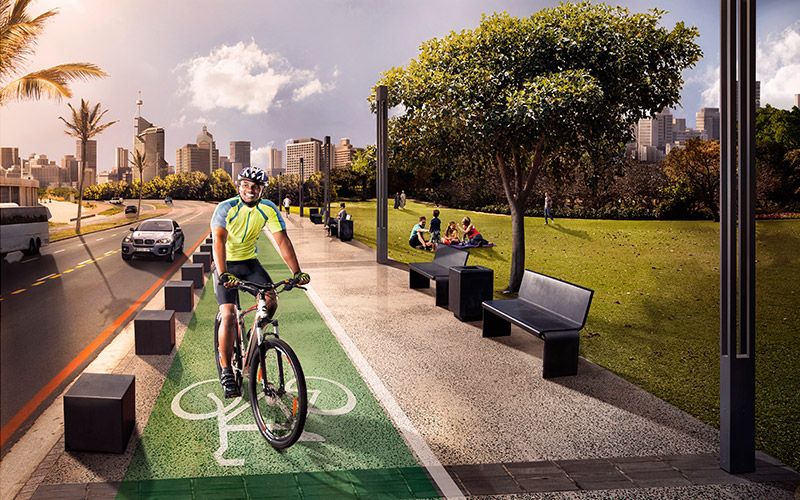 About four times a year Logan Moodley makes a tedious journey to work by bus. From his home in Shallcross it’s a 25 kilometer trip to his office in downtown Durban. That’s where he works for the municipality as deputy head of strategic planning for the local transport authority. The bus trip gives him a pretty good sense of how well he’s doing.

The journey takes over an hour each way and involves a lot of frustrating stops, each of which takes about six minutes as the bus driver collects fares, counts out change and talks to passengers. The excruciating pace is why Moodley, an engineer who has worked for the city for 27 years, only makes the trip to test the service – usually he drives his own car. Every day 750,000 commuters make their way into the city either on the state-run bus or rail service, in their own cars or in privately owned minibus taxis.

Moodley and other city planners reckon that unless the city’s transport system gets a radical makeover, Durban’s 9,462 kilometers of roads will be choked by double the number of current commuters in 20 years. The city has no more space for highways. So it’s going all in on a comprehensive transit overhaul in hopes of saving its streets. 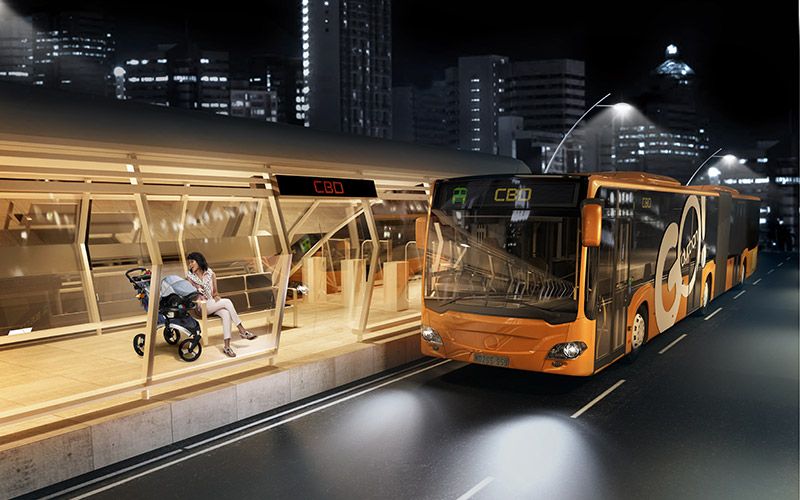 Currently, the city relies on minibus taxis for much of its transit needs. The Go Durban plan will add BRT, with the taxis working feeder routes. Photo credit: City of Durban

This month the city outlined plans to spend R20 billion ($2 billion) over the next 20 years on an ambitious integrated rapid public transport network. Called Go Durban, the plan calls for dedicated bus lanes, a new fleet of buses, about 500 new rail coaches, 25 new rail stations, park-and-ride facilities, a cashless fare system, 24-hour operation and a network of interconnected bicycle and pedestrian pathways. The whole system will be monitored from a single control center, and is key to Durban’s plan to connect citizens and revitalize the city, said Mayor James Nxumalo when he announced the program. “It’s a Durban where people can not only get to their jobs faster, but where new homes are built closer to where they work and new employment opportunities are created closer to where they live.”

This push for more integration – after decades of Apartheid’s segregation-based urban planning – isn’t just a warm and fuzzy feel-good measure, it’s a practical reality and an economic necessity. The dormitory townships created for blacks during Apartheid hobble the economy, as it costs the workers who live in these areas about $3 each day to travel to and from the city, workers who often earn only $10 a day. Most travel by minibus taxi, and Moodley says those living 50 or 60 kilometers from the central business district endure two-hour round-trip commutes with multiple transfers.

Currently, about half of Durban’s population lives within a 10 to 15 minute walk to public transport. One of Go Durban’s goals is to increase that figure to 85 percent. And Moodley believes travel times can be halved with Go Durban’s plans for major improvements to nine transport corridors. Existing infrastructure will be upgraded, and new infrastructure added. “Widening of roads will be required, and if there are two lanes on a road, we’ll add a third. We won’t take away from the existing infrastructure,” says Moodley. “The bus lane will be dedicated right-of-way, separated from the others with a 15 centimeter concrete barrier…All the major road interchanges are being upgraded.”

The city’s transportation infrastructure is badly in need of an upgrade. Photo credit: John Charalambous via Flickr

As for the city’s 13,000 minibus taxis, there will be opportunity for them to integrate into the new Go Durban vision with contracts to run feeder routes to the formal bus system. “At the moment we have too many people on the road for too long, most of them in a system that is governed by taxi operators,” says Moodley. “The new system has to be commuter-led.”

Durban’s Chief Architect Jonathan Edkins says Go Durban has drawn on the lessons of cities like Curitiba in Brazil, which was designed to make mobility for the masses possible. “At the moment everyone comes into the center of the city every day, and then moves outwards,” says Edkins. “It’s a fragmented arrangement. It needs to be properly structured. This (Go Durban) is the city’s response. We have linked the big transport nodes, planning developments around accessible mixed-use areas serviced by efficient public transport.”

“The city is going to get denser,” he adds. “Great cities rely on people being close together. It’s expensive and time consuming to travel far.”

Moodley says the city got an inkling of Go Durban’s potential when it hosted key matches for the 2010 World Cup. Residents opted to park at local shopping malls and catch special people-mover buses into the city rather than endure traffic jams and hustle for parking. And he believes that Go Durban has forced the city into a new level of strategic thinking. Planners from different disciplines have to put their heads together to consider how they can best utilize infrastructure to future-proof the city.

“We have to predict and understand a lot. We discovered that 25 percent of residents walk only,” he says. “They don’t catch any form of public transport, so we have radically improved the walkways, making them easier and safer. It has also given us a chance to create cycle paths and we will connect these to stations. We’ve had to consider how to mitigate the effects of floods and landslides which wash away roads. Go Durban has made it clear that our focus is on moving people, however we do it.”

If a road gets blocked by an accident or flooded by a swollen river, he says, “the rest of the network has to kick in.”

“We’re building resilience,” says Moodley. “The plan is for the city to be so well criss-crossed with roads and railway lines that it will be able to move people quickly and safely, whatever the disaster.”