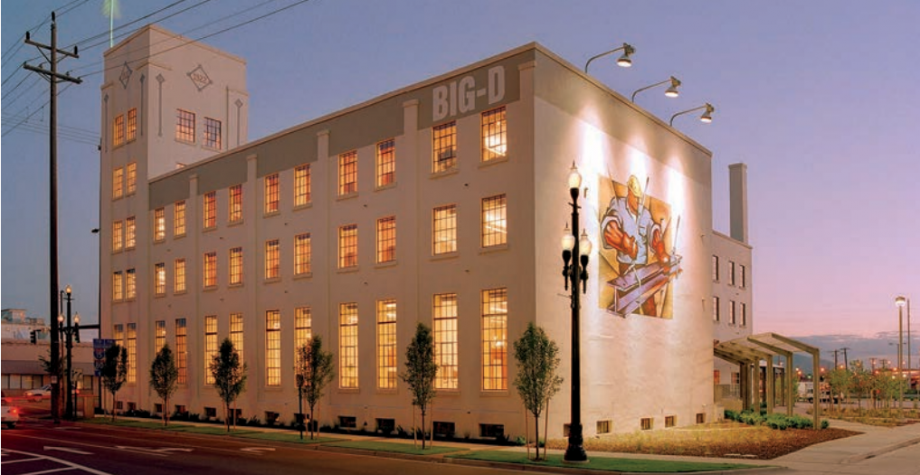 With the help of the Historic Tax Credit program, the Fuller Paint Building was renovated into a construction firm’s headquarters in Salt Lake City. (Photo: GSBS Architects)

A new report from the National Trust for Historic Preservation zeroes in on the impact of the federal Historic Tax Credit (HTC) program. According to the National Parks Service, the program has supported the rehabilitation of 39,600 historic properties and attracted $109 billion in private investment, when adjusted for inflation, according to the report. (This week’s Forefront covers how cities around the U.S. have looked to the National Park Service hoping to stimulate economic development in “Can a Poor Chicago Neighborhood Be Reborn as a National Park?”)

Preservationists regularly describe the national program as vital to their field. It’s no surprise that advocates have risen in defense of federal HTCs after Rep. Dave Camp, chair of the House Ways and Means Committee, recommended repealing federal HTCs in March. NTHP’s report, anchored with research from D.C.-based consulting firm PlaceEconomics, provides case studies of six projects: two in Georgia, two in Maryland and another two in Utah.

Why are HTCs so important to preservation and to cities? Here is a look at how the credits are doled out and a rundown of the report’s key findings.

How Does the Historic Tax Credit Program Work?

Developers restoring buildings listed on National Register of Historic Places or certified by the National Parks Service can apply for 20 percent income tax credits for rehabilitation expenses. To bolster the program’s usefulness as an economic development tool, only “income-producing” projects are eligible; NPS clarifies this requirement as spaces that serve “commercial, industrial, agricultural or rental residential purposes.”

A sister tax break exists for rehabbing buildings without certification for 10 percent of the cost, as long as the structures were built before 1936.

Why Is the Historic Tax Credit Program So Important?

While federal HTCs don’t make financing large rehabilitation projects happen with a snap of the finger, they are seen as crucial tiles to the jigsaw: They can be paired with other tax incentives and represent a standard for cognate programs at the state level.

Not every state has a historic tax credit program, and the amount of credits promised in the 34 states that do varies. It’s not unusual to see state HTCs at risk or reduced as legislators balance the books. Take Wisconsin, which froze $35 million in approved tax credits in late June. Earlier that month, Rhode Island eliminated funding for its program for next fiscal year, despite Gov. Lincoln Chafee’s support.

“The elimination of the federal historic tax credit would virtually end preservation efforts in Illinois,” Lisa DiChiera, Landmark Illinois’ director of advocacy, told Next City this spring. Shrunken state programs have caused preservationists to become more reliant on the federal program and its survival.

“We don’t have the public dollars to make many buildings into museums, nor do we want to do that,” Michael Allen of the Preservation Research Office explained in an email. “Without the federal historic tax credit, preservationists would be back to selecting a tiny number of buildings to preserve like specimens — instead of sustaining their place in local economies.”

Historic Tax Credit, by the Numbers

Also worthy of note: Research shows that program isn’t in the red. “Over the lifetime of the program, the cost of the historic tax credit to the U.S. treasury has been $21 billion, but it has generated $26.6 billion in federal tax receipts.”

The Impact of Historic Tax Credits

The six case studies draw from three states, Georgia, Utah and Maryland, looking at both a city and town in each, to evaluate the success of HTCs in a range of settings.

“The study startled me with the local measures of tax collection and economic impact,” Michael Allen said in his email. “Previous studies showed the multiplier impacts of the federal historic tax credit, but not with such compelling local data.”

The (Macon) Telegraph has credited HTCs with spreading Georgia’s historic preservation beyond Savannah, reporting this fall that the local preservation group had its hands in 43 HTC-backed restorations. The NTHP study shines a light on the Warehouse Lofts, which opened in 2010. Originally a factory, the building now features three stylish apartments.

The report doesn’t explain exactly how the small, $385,000 project ($77,000 in federal HTCs) inspired that much new commerce. PlaceEconomics principal Donovan Rypkema wrote this, however, in an introduction to the report:

Why? Why did all of these projects serve as a catalyst for nearby development? First, taking a property out of the category of ‘vacant, deteriorating white elephant building’ significantly reduced the risk of private investment in the neighborhood as a whole. Second, these projects demonstrated the capacity of existing older buildings to undergo rebirth through adaptive use, opening the eyes of other property owners to the possibilities for their own buildings as well.

Researchers also argue that the proof is in the program’s consistency. Analysis of the use of HTCs in Salt Lake City tells a similar, transformative story — through two projects in the city’s Depot District within three blocks of each other.

The Fuller Paint Building was renovated in 2005 into a corporate headquarters for a construction firm. The rehab price tag tallied to $9.4 million, with $464,380 in federal HTCs and $4 million in New Markets Tax Credits. The following year, an old warehouse was converted into affordable townhouses and gallery space for artists to the tune of $8.3 million, claiming $1.6 million in federal HTCs and $1.4 in NMTCs.

Property values in Salt Lake City declined by 17 percent from 2008 to 2012, but Depot District bucked the trend, rising by 22.5 over the same period.

How Much Danger Is the Historic Tax Credit Program In?

Legislators grasping for criticisms of the tax credits may raise questions of potential gentrification, or cite recent studies on the negative effects historic districts can have on affordable housing growth. Another issue that could come up during discussions of the tax code is its preclusion of school renovation projects.

Nevertheless, observers say Rep. Dave Camp’s proposed Tax Reform Act of 2014 (and with it, his push to repeal federal HTCs) probably isn’t going anywhere. As the bill hasn’t earned support from fellow Republicans, and since Camp won’t be seeking re-election, the credits are likely in the clear at the national level for the rest of the year.