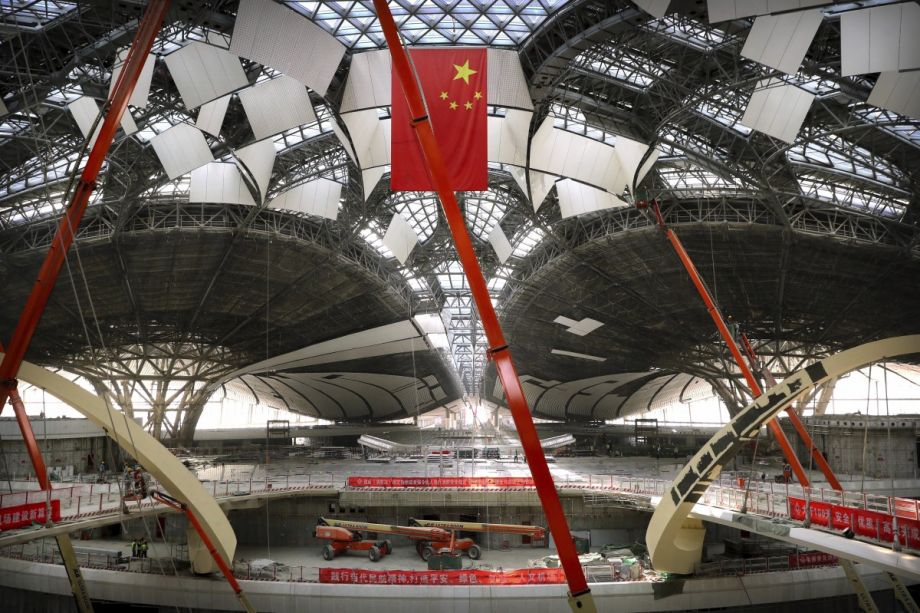 Construction crew members use basket cranes to work on an elevated area inside the terminal building at Beijing Daxing International Airport in Beijing, Friday, Oct. 26, 2018. The airport, which is scheduled to open in 2019, will be one of the world's largest airports when it is completed, and authorities hope it will relieve congestion at Beijing's two existing commercial airports. (AP Photo/Mark Schiefelbein)

The Type D trainsets, which are capable of operating at 160 km/h (99.5 mph), are reportedly the fastest metro trains in China.

CRRC Qingdao Sifang is supplying a fleet of 12 driverless trainsets to operate on the line that will serve Beijing Daxing International Airport, south of the city, which is due to open in September.

Each trainset has four motor cars and four trailers. One car in each trainset will be designated as business class. The trainsets have a capacity of 1,538 passengers.

The New Airport Line will run south for 41.4 km (25.7 miles) from Caoqiao station on Beijing Metro line 10 to the north terminal at Daxing. Trial service on the line is set to coincide with the airport’s opening. Extensions to the line at both ends are already in the works: to the airport’s south terminal at the south end and 3.5 km (2.2 miles) north to Lize Business District.

In the long run, metro line 20 will serve the airport. That line is currently in the planning stage.

Ontario Premier Doug Ford has proposed that Toronto’s subway network be “uploaded” to the province or a regional agency for ownership and expansion. The city has so far been cool to the idea, but The Toronto Sun reports that the city’s main business group is urging City Hall to take Ford up on the offer.

Toronto Region Board of Trade (TBRT) President and CEO Janet de Silva told the paper that the city doesn’t have the funds it needs to build both new subways and the denser housing around stations that would make them most effective.

She cited the currently-under-construction Eglinton Crosstown light rail line as an example of how things shouldn’t be done. The country’s largest infrastructure project right now has produced little in the way of densification.

A report issued by the provincial government recommends that a regional authority develop, fund and build new transit routes that local agencies would then run.

Opponents of the proposal wonder whether it just represents an attempt by the Ford government to grab valuable air rights around future transit stations for the province’s benefit rather than the city’s. Da Silva said that the province is in a better position to build new, denser housing around stations and that the city should negotiate with the province to ensure that the extra value produced by the development be retained locally.

Don Peat, a spokesman for Toronto Mayor John Tory, told the Sun that “without a clear definition of (provincial) uploading and without any information about how it would actually benefit Toronto, the city supports keeping ownership of the TTC subway in the City of Toronto.” Tory was elected in 2014 partly on a pledge to build more rail transit.

Da Silva says that business owners are telling her that the availability of housing is hurting their ability to attract and retain talent and that the province is in a better position to build new housing around transit stations. “I think there’s a lot of opportunity to make this a win-win for both the city and the province,” she said.

Railway Gazette International reports that Amtrak announced on Feb. 5 that it has reached an agreement with New York’s Metropolitan Transportation Authority that will lead to additional rail service into Penn Station.

The additional rail service will be made possible when the East Side Access project allows Long Island Railroad trains to use the lower-level platforms at Grand Central Terminal beginning in 2023. Amtrak will use the freed-up capacity at Penn Station to allow Metro-North trains, which currently end their runs at Grand Central’s crowded upper platforms, to reach Penn Station via the Amtrak-owned Hell Gate line between New Rochelle and Sunnyside Yard in Queens. In conjunction with this project, four new Metro-North stations would be built in The Bronx at Hunts Point, Parkchester, Morris Park and Co-op City.

The “Penn Station Access” agreement also calls on the MTA to pay for signal system, track and power supply renewal on the route. The two agencies will share the costs of operating and maintaining the upgraded route.

In the longer term, the two agencies will work together to determine how Amtrak can bring long-distance intercity train service to Long Island. One of the main issues to be dealt with in bringing this about is how Amtrak, which uses locomotives powered by diesel fuel and overhead AC electrification, will be able to switch over to the third-rail DC power the LIRR uses.