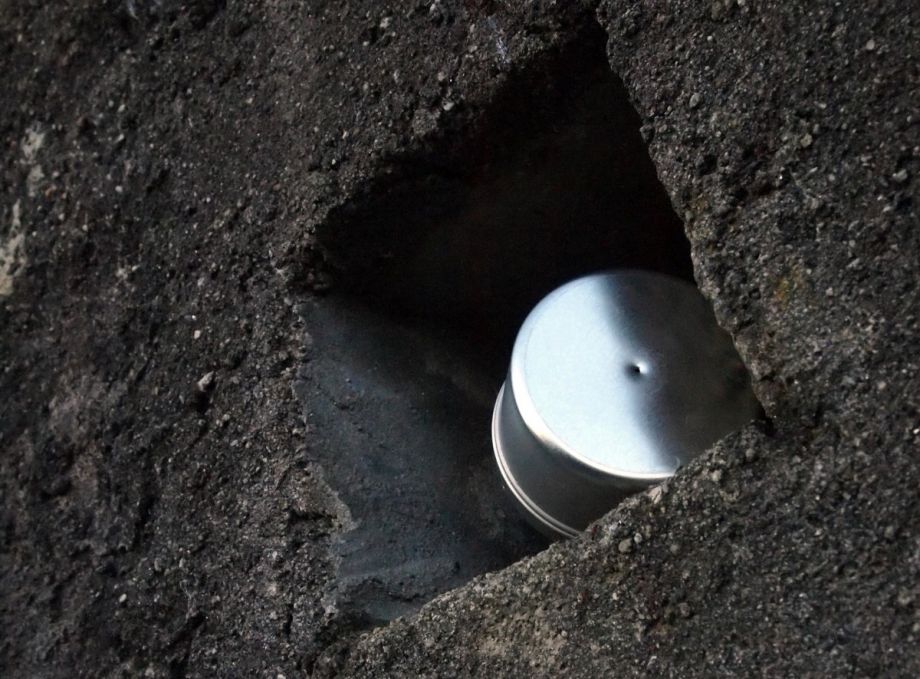 One of Keats’ cameras, placed in a secret location.

“I’ve seen this city undergo extraordinary transformation,” says conceptual artist Jonathon Keats. “It kind of creeps up. When I go away and come back again, I’m always struck by how different the place has become.”

Keats is talking about his hometown of San Francisco, but he could just as easily be describing almost any city on earth, including Berlin, a city famous for its dramatic transformations. It was this history of change that prompted Keats to choose Berlin as the site of his project to create “a photographic time capsule” of a city over the course of a century.

As we speak, pinhole cameras are being placed in secret locations all over Berlin. Each will each take a single photograph with a 100-year exposure. Volunteers will place the cameras in neighborhoods throughout the city, keeping the location a closely guarded secret until they grow old or ill, at which time they will pass the information on to someone in the next generation. In 2114, the people they’ve told will retrieve the cameras from their hiding spots and, in theory, have a chance to see the photographs developed and exhibited.

Keats’ personal and professional connections with the city of Berlin – he’s been working and living there on and off since 2007 – was one of the reasons he chose to launch the project there. It’s also a city that’s “in a transitory space” after the ravages and divisions of the wars of the last century. “It’s a city that’s finding a new identity,” he says. “Talking to people in Berlin, there is such an incredibly profound sense of confusion about what the city is and what it might become.” Not that Berlin is unique in that sense – Keats wants to see Century Camera Projects in cities all over the world, and is already working with groups in Phoenix, Mexico City and Cairo, and encouraging others to replicate the project in their own cities.

Since there’s no photographic process that lasts longer than a human lifetime, Keats had to create his own. Observing that ordinary paper fades in sunlight, he chose to use black paper as the exposure surface in pinhole cameras to create a positive image. Things that do not change over the 100-year timespan of the exposure will appear very bold in the image, while those that do change – a building that’s knocked down after 40 years, for example – will appear ghostly and translucent.

“It felt like crossing a threshold, to pass a biological lifetime,” he says. “The greatest challenge is being able to see beyond the perspective of yourself, but it seems so important now in this generation that seems so unsustainable.”

Fleeting moments of everyday life won’t be captured in these images, but slow and more subtle changes will be. “The chance to engage in different scales of immediacy is something long-term photography can do,” Keats says.

So what might these photographs look like? The images, he says, will be like “a movie condensed in a single frame.” But just getting an image is a challenge in and of itself. Participants’ first hurdle will be to find places to put the cameras where they won’t be disturbed for 100 years. If one of them is nudged off-center even slightly, he says, you’ll just end up with a blur.

“If you get all that right, and if you’re very lucky,” Keats says, “you get a picture.”

At the project launch event, participants sign up to place cameras around the city.

He expects the photographs that do come out will have a few key features. The things that don’t change will be most visible, as will phenomena that are constant. For example, traffic on a busy highway will appear as a composite of cars that look like a solid object.

Their second challenge is to find something worthy of a hundred-year photo. He suggests that participants look for “potential change or potential constancy.” Keats says that people have proposed a graveyard, the parts of the Berlin Wall that are still standing and the view from one participant’s own family home.

The Century Camera Project has been described as a kind of surveillance – tiny hidden cameras trained on the public. But in a sense, the project subverts that concept. Surveillance cameras we see mounted in stores and on street corners are there to capture details of people’s daily activities. The background is essentially irrelevant.

In the images from the Century Camera Project, on the other hand, only the background will be visible. Like old daguerrotypes of streetscapes, people passing in and out of the frame won’t register in the images. Rather than the daily drama of human lives, only the accumulated constants of the cityscape will be captured.

“The background is something that we learn to filter out in surveillance, but also as a matter of everyday life,” Keats says. “This project is a way of responding to how our minds work… The cameras are, in a sense, really engaged in reversing the foreground and background relationship. And hopefully they are also the means by which we can switch from foreground to background thinking.”

“Future generations will see us and see the effects we have on the world,” he says. “But if we can see ourselves and our world in terms of that background, we can imagine that world in ways that are important.”

In ethical terms, the concept resonates with the idea that our behavior changes when we think someone is watching us. “It reminds me,” Keats says, “of Talmudic stories and the way in which God operates in religious societies [as a kind of] ethical feedback loop. And ours is a secular society that doesn’t have that. And if you buy into the idea that religion evolved as an ethical system, when you no longer have a God that’s providing surveillance services, then technology perhaps serves the purpose that God does.”

But of course, in traditional surveillance, some sort of ultimate authority is doing the watching, whether it’s God or the NSA. “The cameras are available to anybody and they watch the happenings in that world [where decisions] are going to be guided… by power players,” Keats says. “If you reverse or at least flatten that hierarchy… it could potentially result in a different sort of society, or at least a society with a different sense of itself.”

I asked Keats why he gave the cameras to city residents to place in locations of their choice. “I want the project to organize itself,” he says, “because that is really what cities do at their best, and that also is what brings out the worst in cities. It’s a positive force but can be exploited and turned into various sorts of tragedies of the commons. This project will only work if a number of people will do something in no way beneficial to them and build a relationship with someone far in the future – a relationship built around the custodianship of the camera. That models the relationship necessary to make a city livable for all.”

“These photos will represent what selfless self-organizing will look like, and if most of the pictures are missing [in a hundred years], that also will tell you something about a city and what it has become.”