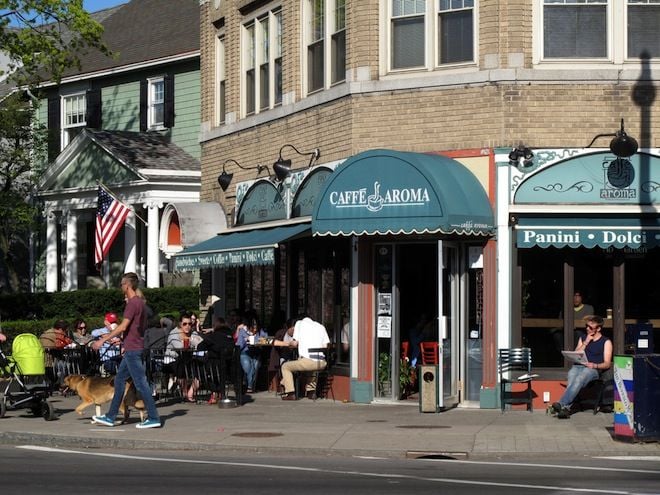 A coffee house in one of Buffalo’s many walkable, transit-served neighborhoods

Hey, world! Buffalo is calling! And it wants you to know its steel mills closed down like 30 years ago, the Blizzard of 77 is so yesterday, and the Buffalo wing was invented way back in 1964. Your impressions of Buffalo are so out of date.

This is the 21st century. Buffalo is turning the page. We’re getting wealthier, smarter, and more productive. We’re green and we’re hip. We’re sneaking up on you, world! You have no idea how how cool we are.

Rust Belt cities like Buffalo, Pittsburgh, and Minneapolis are actually doing pretty well economically. And you know what else? Rust Belt cities are greener and more sustainable than all the Sun Belt sprawl cities, so we’re probably going to be pretty competitive in the coming years.

Pretty soon, all those Sun Belt cities are going to wish they’d developed in the late 20th century the way Buffalo did in the early 20th century. Buffalo’s mixed-use, compact neighborhoods are still here. We’re reviving them one by one. And unlike the sprawling cities built for the car, Buffalo starts with traditional neighborhoods built for people.

Buffalo is still losing population (10.7% from 2000 to 2010) and poverty is still very high (28.2%). Buffalo is a city of no illusions. We don’t run away from harsh realities, but we also don’t shy away from showcasing our strengths.

Here are some noteworthy economic trends happening in Buffalo today:

Foreign in-migration is climbing. Immigrants are the fastest growing demographic in Buffalo, with a gain of 6,762 foreign-born residents in the City, a 52.6% increase from 2000 to 2009.

The economy is diversifying. The Buffalo metro area lost 43.2% of its manufacturing jobs from 2000 to 2010, a loss of 35,900 positions. Yet the transition to a more resilient, knowledge-intensive economy is taking shape. New engines are driving job growth in the region: life sciences, professional services, leisure and hospitality, education, and finance, among others.

Yes, we’re perfectly aware our city is no Seattle, Boston, or Toronto. Yet things in Buffalo are getting better! We have more work to do, but we’ve made a good running start.

As peak oil and climate change loom on the horizon, we see even more clearly than before that cities that will thrive in the 21st century will be compact, walkable, and transit-served. The thriving cities of the future will have a strong sense of place and provide options for green lifestyles. They will be lively, intense, and diverse. Buffalo starts with strong foundations in each of these categories.

These are some of the trends that may bode well for Buffalo over the long term:

Buffalo remains compact. Buffalo lost 55% of its population from 1950 to 2010, yet is still among the top 20 most compact cities in the United States. With a density of 6,436 people per square mile, Buffalo is more densely populated than Portland, Milwaukee, and Denver, all leading “green” cities.

Walking, cycling, and transit are viable options. Buffalo’s traditional, mixed-use neighborhoods make it possible for commuters to access a range of transportation alternatives. In 2009, 13.1% of Buffalo commuters took transit to work, 6.4% walked, and 1.1% took a bike. These are among the highest rates of non-car commuting in the United States.

Automobile dependency is low. As of 2009, 30.3% of Buffalo households get by without a car, a share of car-free households comparable to Chicago (26.6%) and San Francisco (30.3%). People can get around in Buffalo without relying on an automobile.

When gas is $8/gallon, living in Buffalo will be a luxury. Buffalo is compact, diverse, and connected. Thanks to a new zoning code in the words, we will continue to develop smart and capitalize on our place-based assets. We do have a long way to go. We’re a blue collar town and we understand the meaning of hard work. Work hard we will!

We’re building on an amazing urban legacy, with work by the likes of Olmsted, Richardson, and Bunshaft, that establishes a basis for rebuilding the cool city we once were.

Buffalo is establishing a new aspirational narrative. We’re telling a new story! World, are you listening?

Chris Hawley is an urban planner in Buffalo.