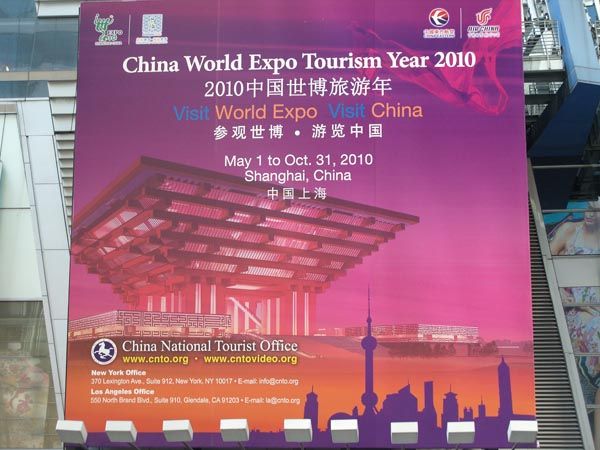 A billboard for the 2010 Expo in Times Square. Erin Kremer

In a week, Shanghai’s World Expo will begin ushering in daily crowds larger than the population of Boston. They will pack into a 2.5-square-mile wonderland of fantastical pavilions that extol the capitalist-driven smart growth consensus. There will be best practices on display from around the world, ranging from traffic reduction techniques to the use of “smart cards” to navigate cities, all on the theme of “better city, better life.” There’s even a message for children: “Be the master of future cities and experience wonderful life in the future.” I don’t know exactly how an outdated quinquennial like the World Expo managed to generate such popular mania. Maybe it’s because this happens to be a day and age in which cities, authoritarian capitalism, and “rising” China are in vogue, especially within China.

Shanghai has become China’s China, growing faster than the country at large and at rates that baffle outsiders. The city’s residents have for the most part embraced the Expo, which reinforces its place as China’s premier magnet. For Chinese living outside of it, Shanghai has a New York-like allure as a business capital. Countless numbers of Chinese will see Shanghai for the first time, fantasizing about “living here someday” the way many of us do when we walk through Manhattan. This naturally evokes civic pride among Shanghainese—some, I’m told, say their city could have done a better job than rival Beijing did with the Olympics. And then there’s the Expo itself, whose pavilions optimistically convey a more comfortable, connected future with China at the center of it. The Expo’s huge international presence also serves as a constant symbolic reminder of Shanghai’s global importance.

Ironically, the Expo isn’t getting as much attention abroad as the Olympics did. An Expo is something to experience firsthand rather than watch through a television set, and the average American newsreader probably cares more about Michael Phelps than urban best practices. The China National Tourist Office seems to want foreigners to attend the Expo, but their sad-looking billboard on Times Square is embarrassingly overshadowed by the neon-lit Red Lobster awning next door. Still, the Expo may generate attention because it speaks to the “rising China” narrative espoused each day in the Western press. This hysteria is evident enough by the large market for books with titles like When China Rules the World, China Rising, Dragon Rising, and China Wakes. On top of that, a substantial number of Americans falsely believe that China is the world’s leading economic power.

Well, one thing is certain: Shanghai is a place that is rising physically, and much has been made of the fact that its skyline presently has buildings taller than anything in New York or Chicago. The sci-fi character of its urban landscapes provides visual confirmation for the West’s “rising China” delirium. I’m reminded of “China Prophecy,” a fascinating recent exhibit on Shanghai at New York’s Skyscraper Museum, describing a city “physically transformed by the twin emblems of modernity—high-rises and highways.” The exhibit (which closed earlier this month) juxtaposed today’s Shanghai with old 20th century fantasy visions of a New York connected by mammoth skyways and skyscrapers. The message is that the-future-that-never-was in New York is suddenly materializing in Shanghai.

But in reality Shanghai is a poor, polarized city that is hardly a bastion of best practices. Adam Minter, a leading chronicler of the city, described most of Shanghai’s redevelopment as a “Le Corbusier fantasy” at odds with the Expo’s smart growth message. He likened it to the problematic tear-down-and-rebuild approach taken by American cities fifty years ago. “All planners think they need are tall buildings,” Minter told me, adding that Shanghai isn’t even close to rivaling New York, London or Paris in terms of the quality or aesthetics of its buildings. Even new high-rises, he observes, show early signs of cracking. One freshly built residential tower collapsed last year. When I asked about what relevance the Expo’s urban best practices have for Shanghai, Minter told me this: “Let’s start by putting better rebar into buildings and then talk about new urbanism.”