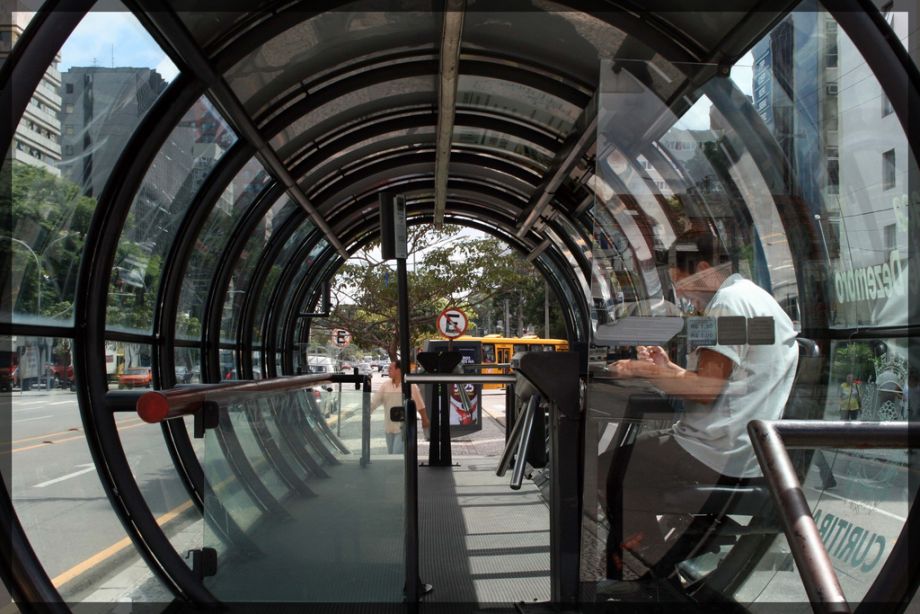 A bus rapid transit station in Curitiba. (Photo by marcusrg via Flickr)

The park is indeed tiny — 4,200 square feet flanked by ivy-covered walls, with a gentle waterfall at its back that’s both subtle and arresting at the same time. It’s exactly the kind of public space Lerner has become an evangelist for: a pinprick of high-quality urbanism whose effect on the surrounding area exceeds its diminutive dimensions.

Lerner’s book, Urban Acupuncture: Celebrating Pinpricks of Change That Enrich City Life, champions such spaces. As the three-term mayor of Curitiba, Brazil in the 1970s and ’80s, he pioneered a low-cost, low-impact approach to solving the city’s problems, from implementing the world’s first bus rapid transit system to giving different parts of the city their own unique public lighting schemes.

Now, 11 years after it was originally published in Portuguese, Lerner’s book is being released in English, its translation funded by the Knight Foundation, at a time when his ideas have been embraced by cities around the world. He cites examples like New York’s High Line and the reclaimed Cheonggyecheon River in Seoul as cases of excellent urban acupuncture, but also much smaller things, some of which aren’t even physical. “Urban acupuncture can be many things,” he says. “It’s the light that comes out of the 24-hour delis. It’s the music that plays in a city’s streets.”

These are the subtle cues that add what researchers call “legibility” to public spaces: street vendors hawking affordable food, good exterior lighting, benches for people to rest on. It’s the notion that the quality of the concept is more important than the cost of the infrastructure. Lerner cites Curitiba’s inspired program to improve sanitation in the favelas by giving residents free bus tokens in exchange for their collected garbage. And a plan to thread electrical cables and water pipes through the handrails of the steep staircases that wind their way through the city’s hillside slums, bringing power and water to those communities at minimal cost.

Urban acupuncture, in other words, is the grown-up cousin to tactical urbanism, which has suffered a bit of backlash lately as a trendy, high-concept practice of questionable long-term impact. But when I ask Lerner whether it’s important to somehow quantify the results of the practices he advocates, his answer, delivered without hesitation, surprises me: “No. It is not necessary.”

“We make the mistake of saying that something is not worth it if there is no proof to it,” he says. In fact, Lerner believes that our obsession with measurable results has killed many a good idea. “If only cities had fewer peddlers of complexity and more philosophers!” he writes in his book. “Industrious mediocrity is gaining ground, along with merchants of complexity: the bean-counters and the inconclusive, never-ending researchers. But sometimes, just one stroke of creativity is acupuncture powerful enough to make progress.”

Spoken like a man who spent two decades battling the red tape of municipal bureaucracy. Still, in the age of big data and tight budgets, most planners would argue that quantifiable results are crucial, and some of Lerner’s ideas do feel a little like Creative Class whimsy run amok. When he suggests, for instance, that New York somehow color the steam that rises from its sidewalk grates to make the streetscape appear more magical, I can’t help but cringe a little.

It’s ironic that for this column, Next City is partnering with Gehl Architects, the Danish firm known for meticulously gathering statistics about how exactly the public uses the urban realm. Gehl’s method — developed by the firm’s founder, Jan Gehl, around the same time Lerner was running Curitiba — is to observe and record the way that people interact with their city, then design public spaces using that research as a guide. Compared to Lerner’s let’s-see-what-sticks approach, Gehl’s is a highly analytic process that puts its trust in the scientific method.

Can there be middle ground between these two ideologies? In a way, the tension between them — the data-driven urban planning versus the philosophical, pie-in-the-sky imagineering — will be the focus of our “In Public” series. Both approaches have something to offer cities, and both have proven themselves with undeniable successes. In next week’s “In Public” story, we’ll look at how Gehl Architects enhanced the public spaces of Melbourne, turning a listless city’s streets into vital corridors of activity. As for Lerner, his terms as mayor of Curitiba brought many improvements. That city is now one of the richest in Brazil, having attracted residents and investment largely thanks to changes made under his tenure. There has been some debate as to the solidity of the city’s fundamentals — Curitiba has a growing housing deficit and the highest car-ownership rate in Brazil. But as a whole, the Curitiba story and Lerner’s theory of urban acupuncture have transformed the way we think of how to make cities healthy, one pinprick at a time.