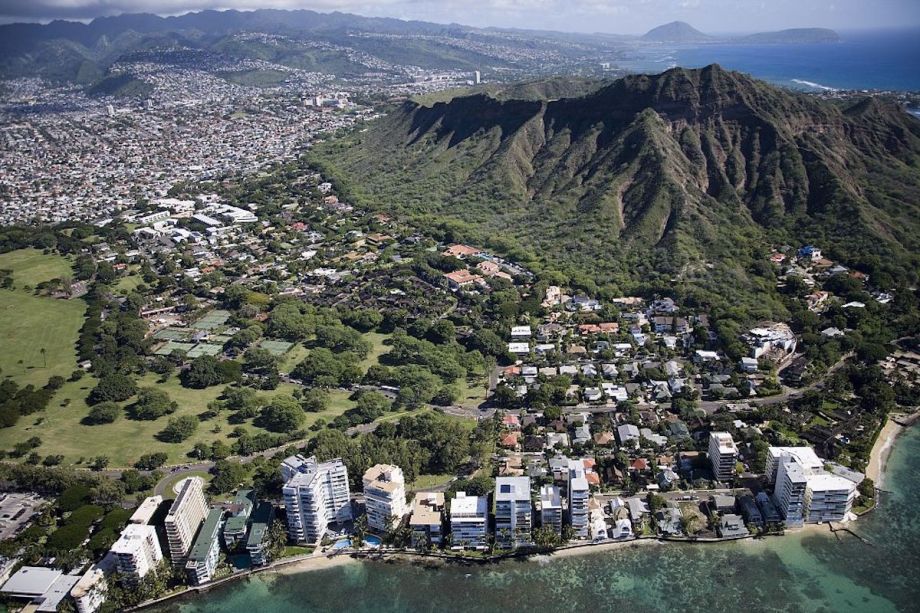 Mākaha is a beach town on the west coast of Oahu, about as far away from the center of Honolulu as you can get without leaving the island. The scene is idyllic Hawaii, says Kymberly Pine, a Honolulu City Council member — remote, and a great vacation spot, but with no hotels. Within the last decade, decent two-bedroom, two-bathroom homes would rent for around $800 a month, Pine says. Now, with the popularity of short-term rental sites like Airbnb and VRBO, a new class of investors has bought up much of the property, and a typical apartment rents for around $2,000 a month.

Even setting affordability aside, Hawaii’s housing shortage is dire. According to a 2015 report from the state, Hawaii needs at least 64,700 new homes by 2025 just to meet demand.

State Senator Stanley Chang has a plan to address that need: Build all 64,700 new homes. In January, Chang introduced legislation to create a program called ALOHA Homes (Affordable, Locally Owned Homes for All). He proposes that the state build a series of massive, dense housing towers on publicly owned land and lease individual condo units to tenants for 99 years at about $300,000 apiece. He found inspiration for the program in Singapore, where around 80 percent of residents live in public housing.

“Hawaii has had a decades-long shortage of affordable housing,” Chang says. “This has been in place at least as long as I’ve been alive. And as the Senate housing chair, I wanted to focus on ways to fix the shortage. Not just make marginal improvements, not just nibble around the edges, but actually solve the issue.”

Chang says he looked overseas after he couldn’t find a town in the United States that was adequately addressing housing shortages at the scale of the Hawaii problem. He traveled to Singapore last May and Vienna last October. In Vienna, “social housing” is famously popular and widespread: Around one-quarter of the housing stock is city-owned and subsidized for low-income residents, while another quarter (reported figures vary) is built on a limited-profit model. In Singapore, starting in the 1960s, the government began a massive housing development program, and today around 80 percent of residents live in public housing units that they lease for 99 years.

“I really focused on Singapore as the model with the greatest potential here in the U.S., because, for starters, in Singapore it doesn’t require a taxpayer subsidy,” Chang says. “And as we all know, it’s very difficult to secure large taxpayer subsidies for public housing in the United States.”

Chang wants the Hawaii Housing Finance and Development Corporation to build thousands of high-quality, amenity-rich apartments on public land near train stations in Honolulu. The state could recoup its money by selling the condos at $300,000 apiece — lower than the typical market rate for a Honolulu condo, but high enough to avoid a big taxpayer expenditure, according to Chang.

Notably, $300,000 is not what many Americans would consider an affordable price for a home. And the homes would be leased to any Hawaii resident, regardless of income, a vastly different understanding of public housing than the U.S. is accustomed to. Provisions in the law would limit the amount that buyers could earn back when they sell to prevent speculators from buying the properties. While Honolulu has a high median income, Chang admits that very-low-income residents likely wouldn’t be able to lease one of the condos.

“The real bigger-picture issue here is that housing is a public service that everyone needs, rich and poor alike,” Chang says. “If you drive on a public highway, DOT does not ask how much money you make … . These are public services and they should be open to everybody.”

For a U.S. state, the proposal is unusually ambitious.

“In the United States, because our model is privately owned land, usually the groups that are trying this are really small community land trusts that are nonprofits trying to amass land and basically do the same thing,” says Corianne Payton Scally, a principal research associate in the Metropolitan Housing and Communities Policy Center at the Urban Institute.

It isn’t surprising to see Hawaii pushing the envelope, Scally says, both because of its progressive politics and the depth of its housing crisis. And while much of the policy experimentation happens at the local level in the U.S., it makes sense that a program of this scale would come from the state, she says.

Of course, lawmakers are trying to address the housing shortage at the local level too. Pine, who chairs the Honolulu City Council’s zoning and housing committee, says she recently pushed a bill to overhaul the city’s inclusionary zoning ordinance because, as in many other jurisdictions, it wasn’t producing a whole lot of new affordable housing. The city is also experimenting with modular-home communities for formerly homeless families. Pine says she has some concerns about the infrastructure demands that the ALOHA Homes proposal would create, but she is intrigued by the idea.

“I certainly support Senator Chang’s effort to do something different and bold, because we’re in a crisis in Hawaii,” Pine says.

Some advocates are calling for much bolder ambitions. Last month, writing in Jacobin, Daniel Aldana Cohen, an assistant professor of sociology at the University of Pennsylvania, called for “a Green New Deal for housing,” proposing that the U.S. build 10 million no-carbon public homes in the next 10 years, and then repeat the program every decade. Cohen has questions about the ALOHA Homes proposal. For one, he points out, under the Singapore model almost all of the housing is public, so it’s not clear whether Hawaii could achieve the same results with a smaller public housing program.

“The biggest question for this policy in Hawaii is, why wouldn’t they provide something like 20 percent of the spots to people who couldn’t afford the mortgages?” Cohen says.

Citing a report from the People’s Policy Project, Cohen says that construction of the new homes could be financed normally to keep the development program from carrying a balance, while a separate fund could subsidize rents for low-income tenants. The growing housing crisis has fostered support for bolder policies to address housing shortages and housing costs. But without targeted support for the neediest residents, even massive public housing programs will fall short, Cohen says.

“I think it just reminds us in a way of the promise and the peril of the new political movement,” Cohen says. “On the one hand, we’re back to the government being able to do something. But it’s a danger that it’s going to throw poor and working-class people under the bus.”

Chang is organizing a delegation of leaders to travel to Singapore at the end of May, to see its public housing for themselves. The delegation will include legislators, heads of the state housing agencies, and representatives of the Building Industry Association of Hawaii and the advocacy group Faith Action for Community Equity, and likely more (he even invited me). He’s hoping to meet with Prime Minister Lee Hsien Loong, and that the delegation will see that massive public housing and a high quality of life can go hand in hand. Chang says he has early support for the proposal, including from the governor, but he doesn’t know when the legislation might go up for a final vote.