Have You Ever Wondered What Civic Tech Is Doing for Cities? – Next City

Have You Ever Wondered What Civic Tech Is Doing for Cities? 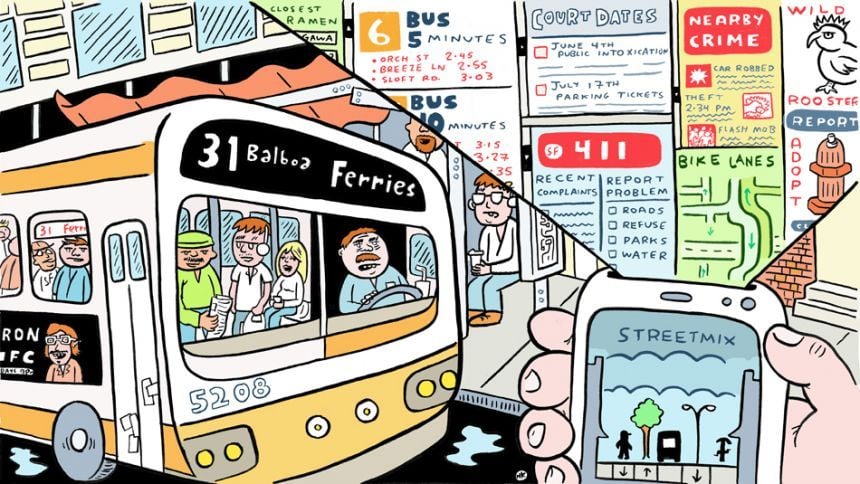 Ten years ago, reporting a pothole in the city of Philadelphia meant calling a desk at City Hall and waiting. There were multiple points of contact and no guarantee that your request would reach the right set of ears. Today, you can enter an address into a city website and within minutes, receive confirmation in your inbox that the guardians of smooth streets have received your message.

Technology is changing the way government works, and the pace of change is likely only to speed up — in 2004, there were 34 companies working in the realm of civic technology; in 2013, there were 121, according to a study published last year by the Knight Foundation.

This week, the growing industry is decamping to Philadelphia for Rise, a two-day conference on civic innovation. Hosted by the East Coast local technology news network Technical.ly, Rise will bring together civic technologists and their friends for conversation about how to use new tools for better cities. In advance of the event, we asked Technical.ly co-founder Brian James Kirk for answers on our four big questions about civic tech.

Technical.ly’s tag line is “better cities through technology.” Can you summarize why you think technology has the potential to improve our cities?

Technology’s ability to improve quality-of-life factors for people is well-documented throughout history. What we’re focused on at Technical.ly is how people use technology to empower local, civic change. At a high level, that could mean improving government transparency or providing access to information to more diverse communities. It’s also inherently tied to economic and workforce development through the organizations that are deeply tied to the technology community: startups or large businesses that rely on tech to improve efficiency. Finally, it translates more simply in day-to-day activities, like finding an easier route to work in the morning using a mobile app.

What are your top two go-to examples of positive impact you’ve seen technology have on urban civic life?

For one, the cultural vibrance of cities is becoming a huge draw for post-graduates looking for work. Young people are choosing to live in cities for all the reasons you’d expect: access, mass transit, diversity of people and ideas, and even, yes, good food. Finding quality work is one of the most important parts of that decision. At the same time, companies driven by technology are not distinctly wed to the West Coast or to New York anymore — you can build a global company anywhere. Many new cities are becoming players in a national conversation about tech entrepreneurship and its impact on the local economy, and are, too, benefiting from access to that bigger talent pool.

Second is the sense of empowerment and impact that technology can help facilitate. If you look at hackathons — where coders and topical experts spend a weekend creating technical solutions to everyday problems — there’s something more special happening there than a new app being created, or a new process being thought through. What it’s really about is bringing people together to identify problems and quickly create solutions. Seeing that immediate impact is inspiring, whether or not you have a technical eye — it should be important for anyone interested in increasing civic engagement. The environment of a civic hackathon encourages an immediate sense of impact for problems that have long challenged cities.

Which U.S. city is winning the race to be the most tech-savvy, in terms of the way technology is being used by government to increase efficiency and performance?

We look at a question like this through the lens of the local communities that we cover: Brooklyn, Philadelphia, Baltimore, D.C., and statewide in Delaware. Each has its own legacy issues and cultural variance. Philadelphia has one of the most active civic hacking communities in the country — that is, local developers who are writing code to affect change. D.C.‘s municipal effort has a huge platform, since even its local government is so inherently tied to national and international ideas. We’ll hear from leaders in all those markets, and their challenges and success stories at Rise.

Many would argue that the biggest issue facing U.S. cities today is economic inequality. Do you think civic technology can be harnessed as a tool to fight inequality? How?

The growth of technology-based economies in post-industrial cities is a relatively new opportunity. This emerging sector was born of a time when we’re asking a lot more questions about the economic inequality that so clearly exists in those cities. And, because the U.S. is woefully behind in math and science education, tech companies are having a hard time finding talent to fill jobs. So, you see companies like Etsy in Brooklyn trying to rethink the gender gap in tech by hiring more women engineers; or Jarvus Innovations working directly with the School District of Philadelphia to hire bright young students. These companies are thinking very differently about workforce development. They are demanding diversity because it leads to better ideas.