Harry Potter and the City of Gold – Next City

Harry Potter and the City of Gold 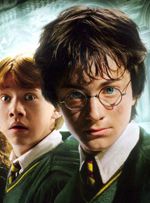 If you’re as big a Harry Potter fan as I am, you’ll know that this week an 800-word prequel to the Harry Potter books was released. The story was written as part of Waterstone’s What’s Your Story campaign to honor the National Year of Reading in England, as well as raise funds for charity. Without giving the story away, which you can read here, I’ll tell you that it takes place in a non-wizard city in England, mostly in a back alley with high brick walls.

Walls, and urban locations in general, have played a mix of roles in the seven-book Harry Potter series. In fact, young Harry is first introduced to the wonderful world of wizarding in Diagon Alley, accessed by tapping the bricks of a wall behind a pub that’s only visible to magical beings. Diagon Alley is a winding, eclectic, and colorful market street where everything from dragon heartstrings to racing brooms can be found. Like our best urban streets, it is mixed-use, featuring shops and restaurants on street level, residences and offices above. I can’t recall whether there are street trees or other plantings, but architecture is traditional, because it’s centuries old, and nooks and plazas provide public spaces for chats and other gatherings.

In the not-so-fictional world where we live, Diagon Alley most resembles those off-center, funky neighborhoods found in every city. The streets are full of lively characters and though some buildings may be a bit run down, they are full of spirit and authentic experience. In Tucson, for example, our Diagon Alley is 4th Avenue, a mix of local restaurants, bookshops, tattoo parlors, pubs, and thrift shops whose walls and trim are every bit as colorful as the brilliant wildflowers our desert offers up in spring and fall. Outside Denver, where we lived before moving to Tucson, the closest example might be Boulder’s Pearl Street pedestrian mall, where the Art Deco courthouse is a fair equivalent of Gringott’s Wizarding Bank, the latter run by goblins.

J.K. Rowling’s delightful books focus less on the streetscape of Diagon Alley than do the Warner Brothers’ movies, which offer a view as imaginative as it is — bubbling cauldrons and purple-robed witches aside — plausible. Ditto for Hogsmeade, the magical hamlet a long stroll from the Hogwarts School of Witchcraft and Wizardry, which Muggles like myself (that is, non-magical folk) estimate to be in Scotland. Wherever it is, it can be reached via a scenic train ride from London’s Kings Cross station, via Platform 9¾. In the books, the village hosts a few favorite shops for candy and jokes, a couple taverns, a coffee shop, and the like. Every time I read about it, or see it in one of the five Harry Potter films (so far), I wish I could visit. My family and I have been so tempted, in fact, that we’ve seriously considered signing onto a tour of England and Scotland designed just for Harry Potter fans, visiting locations important in the books and the making of the films.

But that’s not the real Hogsmeade — or the real fictional Hogsmeade, that is. Fortunately, the opportunity for visiting WB’s vision of the hamlet is not so far off, for the Wizarding World of Harry Potter will open in Orlando’s Universal Studios late next year. The “world’s first fully immersive Harry Potter themed environment” will not only feature a walkable Hogsmeade, but neighboring Hogwarts and the dark Forbidden Forest.

“The plans I’ve seen look incredibly exciting,” said Rowling, “and I don’t think fans of the books or the films will be disappointed.”

Because the park is a re-creation of an imagined place instead of a real place, I’d wager the chances for being disappointed are low. After all, “the new environment will feature immersive rides and interactive attractions, as well as experiential shops and restaurants that will enable guests to sample fare from wizarding world’s best known establishments.” Compare that with Universal Studio’s re-creation of Portofino, Italy, with its obviously fake facades and Vespas bolted to the ground, at the Loew’s Portofino Bay Hotel (http://www.universalorlando.com/hotels/loews-portofino-bay-hotel.html).

Back in the real imagined world, however, I anticipate the small, urban environment of Hogsmeade as both whimsical and magical, drawing from our favorite pedestrian-oriented features: street furniture, vernacular architecture, wide sidewalks, inviting shops. And then the surprises that really help create a sense of place: street vendors and performers, encounters with old friends, owl emporiums and apothecaries. Leave out the dreaded demontors, the occasional misdirected imperius curse, and what will undoubtedly be an entrance fee rich enough to satisfy even the greediest of dragons, and I think the Wizarding World is exactly the place you’ll find my family not long after its opening.