Harnessing the Sun to Power Equitable Development in NYC – Next City

Harnessing the Sun to Power Equitable Development in NYC 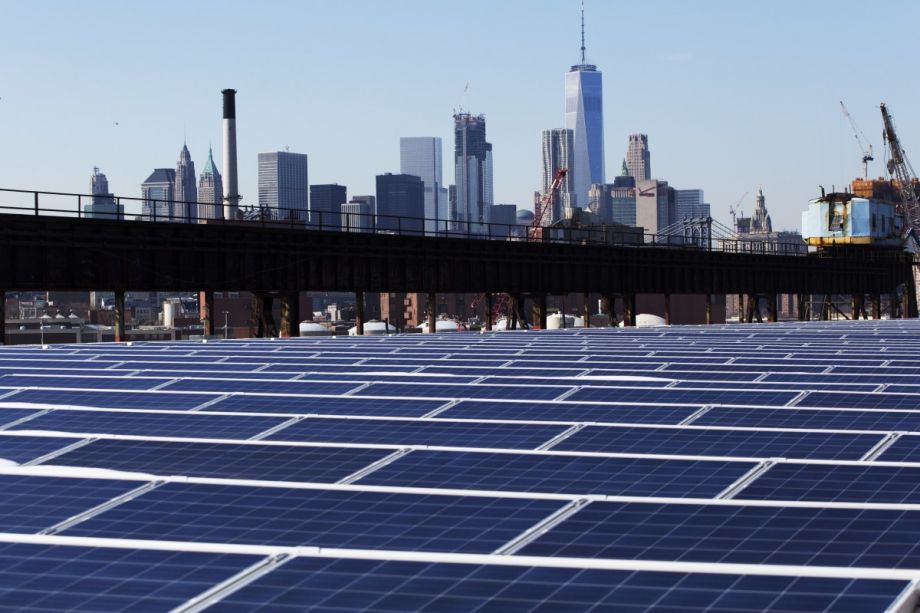 A rooftop is covered with solar panels at the Brooklyn Navy Yard in New York. The Manhattan skyline is at top. (AP Photo/Mark Lennihan)

Along the peninsula of the South Bronx, a concentration of warehouses are responsible for billions of dollars of industry. The waterfront is home to manufacturing, waste treatment, food distribution. “And all that activity surrounds an impoverished residential core,” says Toby Sheppard Bloch, chief venture officer for the HOPE Program, a workforce development nonprofit.

Members of the HOPE Program look at the industrial spread — which contributes to some of the worst health outcomes in the nation for South Bronx residents — and see a glimmer of possibility. “All that economic activity is happening exclusively in one-story, flat-roof buildings,” Sheppard Bloch says. “That’s millions of square feet of really prime rooftops.”

The organization is now developing a local workforce to install solar panels on such rooftops. The panels are increasingly utilized for community solar, a solar power array whose electricity is shared by more than one household.

“It’s a way to offset the negative environmental impact of those warehouses,” Sheppard Bloch says. “It’s a climate justice issue.”

The Bronx has become a hub for the growing effort not only to increase solar use across New York City, but make it equitable.

“Urban solar is tough — and there are very few places in the world that are urban as New York City,” says Sean Garren, northeast director of Vote Solar, an organization working to make solar affordable and accessible to more Americans.

For solar advocates to organize in multi-family apartment buildings, it takes time to educate and reach a building-wide consensus. In lower-income neighborhoods, the cost of installation can be an immediate turn-off.

But there’s political support for renewable energy at both the city and state level, with a mandate by Governor Andrew Cuomo for half of the state’s electricity to come from renewable energy sources by 2030.

Advocates want more solar in that future. This summer, the Million Solar Strong New York campaign urged Governor Cuomo to set a goal of powering one million homes by solar by 2023, including 100,000 low-income households.

“We need to set a higher bar for what success in solar looks like,” Garren says. “And we need to do that in an equity sense.”

In the city, a coalition of for-profit and nonprofit organizations are increasingly taking equity into account. OnForce Solar, a for-profit company headquartered in the Bronx, opened the largest community solar project in the borough this fall.

OnForce considers community solar a sustainable business moving forward, using a model in which users subscribe for a set period of time, with guaranteed discounts on energy bills. It’s open to anyone in New York City who pays an electric bill, from renters, homeowners, small businesses to houses of worship, says Dustin Kirkpatrick, who handles commercial sales.

The company has sought open space and large rooftops for community solar across the Bronx, Brooklyn, Queens and Staten Island. Roughly 20 percent of each project is reserved for lower and medium income New Yorkers, according to Kirkpatrick.

OnForce also finds local partners, like the HOPE Program, for workforce development and community outreach. “Outreach and consumer education is always one of the toughest parts of any new initiative,” says Kirkpatrick. “The local partnerships are crucial.”

Solar One, a New York nonprofit, is forging its own partnerships to increase access. The focus on solar installation for single-family homeowners who can afford the down payment has shifted thanks to energy efficiency incentives and loans, according to Solar One program manager Anika Wistar-Jones.

Solar One recently launched the “Co-ops Go Solar” campaign in partnership with the Urban Homesteading Assistance Board, a nonprofit that supports residents to form and maintain co-op buildings. The campaign provides free technical assistance, cost estimates, roof inspections, financial incentives and funding options to install solar panels on limited-equity cooperatives — a particular form of co-op subsidized by the city to make homeownership available for low-income households. Co-ops that sign-on join a purchasing group to negotiate for lower prices.

“A [cooperative] board has to decide they all want solar, and they want solar over other building priorities,” Wistar-Jones says. “We are holding lots of workshops, presentations for [co-op] shareholder meetings, and presenting options for how solar may work for their building.”

Solar One also extended solar education to the Urban Homesteading Assistance Board. “We have long-standing relationships with many [apartment] buildings, but don’t necessarily know a lot about solar power,” says Clara Weinstein, who worked with the campaign.

Back in the Bronx, the Point Community Development Corporation considered opportunities in renewable energy after Hurricane Sandy hit in 2012. Solar emerged as an appealing investment. “The [South Bronx] housing stock is old and energy inefficient, so residents often pay a higher utility bill,” says Angela Tovar, director of community development. “Many people in the community also voiced their interest, and how it could a job generator.”

The organization and their team of technical advisors are in the research phase of building a community solar model which will include ownership of the infrastructure by community members. “In our minds, this is an opportunity to build something that serves the community and — if we can do it right — will support ownership from within,” says Tovar.

The Point hopes to secure investors for a community solar ownership model by the end of next year. “If we’re giving ownership back to the community, then it’s more than just community solar,” Tovar says. “It gives people the discount, and creates opportunities for work, training, wealth generation and long-term ownership.”