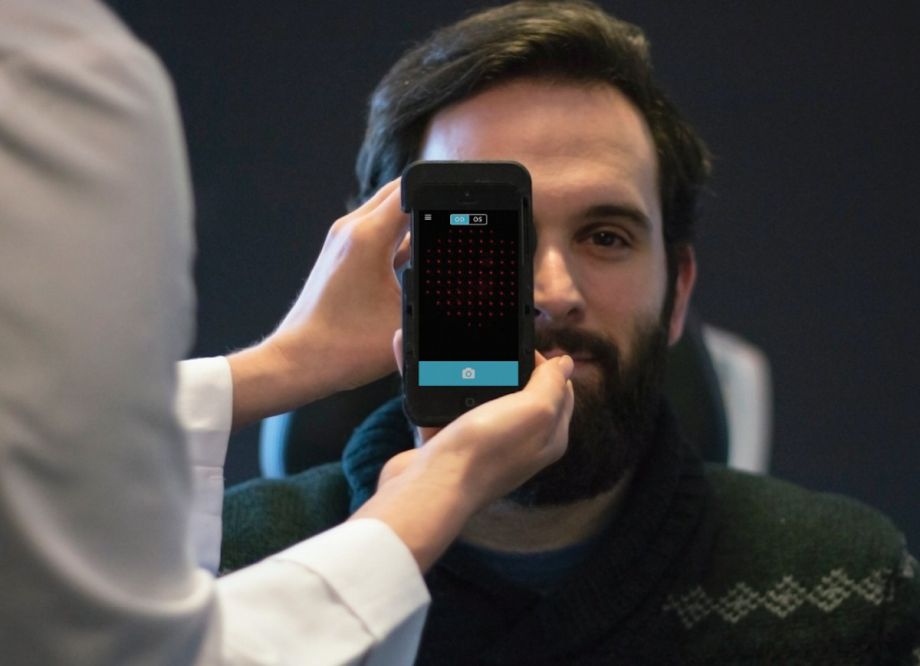 While providing charity eye care in Haiti, Marc Albanese noticed that a single step in the process slowed everything else down. A complex eye-testing machine was essential, unwieldy and too costly to buy in multiples — and it became a bottleneck in giving people necessary care. Happily, Albanese offered an innovation he’d created at his company, Smart Vision Labs: a version of the same machine at one-fiftieth the weight and one-hundredth of the cost.

The device, an autorefractor or wavefront aberrometer, is a small black box with a lens to cover a patient’s eye, mounted on a smartphone — a far cry from the massive metal machine now used to measure the errors in people’s vision. Albanese, his co-inventor, Yaopeng Zhou, and business partner Jordan Kassalow hope their device, the SVOne, will replace that bulky machine worldwide.

“Over a billion people around the world are suffering uncorrected refractory errors,” Zhou says, meaning blurred eyesight requiring glasses. “Our mission is to provide affordable vision to any corner of the world.”

Haiti might be the last corner of the world. Healthcare innovations are slow, even seeming to move in reverse. Mountains Beyond Mountains, a 2003 biography of Haitian NGO founder Paul Farmer, describes the island nation as a “graveyard” of development schemes. In his 2014 book The Big Truck That Went By, journalist Jonathan Katz adds a thorough treatise of corruption and inefficiency among international NGOs. The Red Cross’ post-earthquake donation squandering and UN’s cholera spreading have recently been big news.

A devastating lack of common necessities typifies the country — as does the inability of healthcare providers to fill in the overwhelming human needs. Can Smart Vision Labs succeed where others have failed?

Correcting Haitians’ blurry vision makes good sense. Children who cannot see well enough to read fall behind in school. Some people of working age cannot work without glasses. And virtually everyone loses ability to focus close-up as they age. In each case, the effect is loss of opportunities to work. Eyeglasses can help reduce poverty or drive economic growth, and providing them seems like a relatively easy goal.

The device aims to make it easier. “There’s a little light source inside the box we built … the light travels to your eye, hits your retina, and it scatters off the tissue of your retina … and goes through your cornea and your pupil, getting bended,” Zhou explains. A smartphone captures an image on its screen, and the clinician can save photos of the inner eye and calculate how near- or far-sighted a patient is.

In a promotional video, Zhou emphasizes the machine’s suitability for Haiti: It has no moving parts inside and no external hardware. It’s a simple app, and there’s little need for repairs. “Our machine weighs 400 grams. The other machine weighs 50 pounds,” Zhou says.

To help anyone, however, they need to get the product into the marketplace in the country.

Zhou acknowledges a delay in global adoption and says the product will only be available in the U.S. for the next two years or so. There, it seems likely to succeed. The current price tag in the U.S. is $3,950, and “the other machine costs $40,000,” according to Zhou. In their video, he and an associate offer anecdotes of their mission colleagues in Haiti buying prototypes for their own U.S. offices, particularly because the device works well with kids.

But they also make much of its road-testing on charity missions to Haiti. Verizon recently gave the company its Powerful Answers Award for its healthcare work in the developing world. But might Smart Vision Labs’ efforts be similar to other charitable efforts’ unfulfilled visions of helping Haiti?

Zhou says he’s intent on providing his product worldwide. “Really, we’re pushing very fast,” he says. Although most of the product is now in wealthy countries, he says they have “already shipped the product to nine countries” and maintain ties to small NGOs in Haiti and South American nations.

As for potential failure, Zhou says, “the fundamental barrier is cost, right?” But he ballparks the eventual developing-world cost of his machine at $800 to $1,000, based in part on the expectation that clinicians will offset the cost of the device by selling glasses at nine or 10 dollars a pop.

Ten bucks can be a steep price in places like Haiti, where that’s often a full week’s wage or more, and diagnosing a vision problem is just one part of eye care. Critical elements must be in place in addition to testing, from manufacturing or import of eyeglasses, to the presence of trained eye care professionals to prescribe them and a local market that prices glasses at a cost people can pay. (In a few places, cultural change toward acceptance of eyeglasses also has been necessary.) SVOne addresses only one part of the supply chain necessary for better vision. Haiti, like other nations, may be lacking every part. For now, other charitable and market-based efforts add to what SVOne can provide, including programs offering second-hand glasses, visits from volunteer doctors and perhaps even options like this.

The point of improving vision, after all, can be to remove an obstacle to work. And in Haiti, where many workers are informal and adequate workplace safety or security is just taking hold, easier options for better vision remain an important step toward improved quality of life.

Smart Vision Labs from Center for Care Innovations on Vimeo.