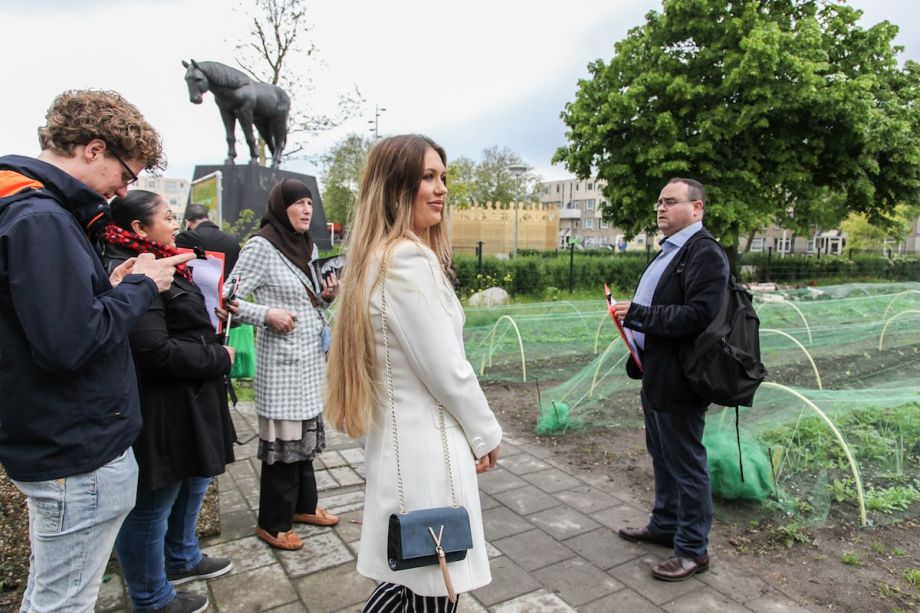 During the Schilderswijk Residents Tours, guide Ali Kammyte, right, talks about a garden for local children. (Photos by Thessa Lageman)

Under a bright sun, a group of politicians and artists strolls along the lively main street of The Hague’s Schilderswijk neighborhood. They see small, colorful shops, markets with fruit and vegetables, and Turkish and Arab restaurants and cafes. In a newly opened Surinamese eatery, they sample snacks the owners proudly offer.

This isn’t a group of tourists from far-flung places visiting the Dutch city. They are all locals, and they are on a Schilderswijk Residents Tour, an artist- and resident-led project designed to change perceptions about the neighborhood.

The Schilderswijk is well known in the Netherlands. In 2015, there were riots after a man died following his arrest. In 2014, demonstrators supporting the Islamic State made the news, and in 2013, Dutch daily Trouw reported of a so-called “Sharia triangle” in the area, with orthodox Muslims dictating the rules. Politicians such as the far-right populist Geert Wilders visited the neighborhood. Although it was later revealed that the journalist fabricated the story about the “Sharia triangle” and was subsequently fired, that solidified the district’s bad reputation.

Ten years ago, the Dutch Minister for Housing, Communities and Integration identified the Schilderswijk as one of 40 “problem districts” to be allocated more attention and investment. Today, research shows the area is home to the highest number of people living in poverty in the country, along with higher levels of crime, unemployment and school dropouts.

But, residents say, that alone is an unfair picture of the vibrant and diverse Schilderswijk.

“Some incidents and issues have received a disproportional amount of attention,” says Itai Cohn, 44, a Jewish-Dutch artist and therapist who has lived in the Schilderswijk for 17 years. “I think it’s remarkable we have over 120 nationalities living together peacefully in this one small area.”

Itai Cohn (center) talks to a group on a Schilderswijk Residents Tour.

Cohn started the Schilderswijk Residents Tours to highlight a more “nuanced and truthful” picture of the quarter. Residents show groups of about 10 to 20 people around a few times a month. Participants have included everyone from ministry employees to local entrepreneurs. (Visitors from other countries do the tours too.)

Guide Ali Kammyte, 42, says he believes the tours inspire change. “Beforehand, people often wonder whether it’s even safe enough to be walking around here,” he says. He shows tour groups a playground where children can borrow toys, next to a newly opened garden, where students learn to grow plants. “Our neighborhood slowly gets a little greener,” he tells them.

Kammyte moved to The Hague from Morocco with his parents 35 years ago. At that time, large numbers of guest workers were invited to work in the Netherlands. Many moved to the Schilderswijk, drawn by cheap housing.

In the 1970s, the municipality began a decades-long urban renewal project, demolishing dilapidated apartments and building new, but still mostly small and cheap, subsidized housing for low-income residents. Kammyte guides groups through narrow streets lined with small neo-renaissance houses to show visitors one of the few areas with pre-1970 houses, which are now listed as municipal monuments.

When the apartment block of Kammyte’s family was demolished in the ‘90s, they moved to another apartment in the same district. “The conditions were quite bad,” he says, mentioning mold and vermin. “In that respect, the district has greatly improved.” However, he notes, “I grew up in a street with mostly ‘white Dutch’ neighbors, but unfortunately they all moved away. It would help if this area better reflected Dutch society.”

While 22.7 percent of the Schilderswijk population in 1995 was of native Dutch descent, that figure has now dropped to 8.5 percent. Most of the current residents originate from Turkey, Morocco and Suriname.

Wies van der Star, 62, a sociologist with Indonesian roots, has a house in Schilderswijk. “We want to show we’re just regular people,” she tells one tour group, smiling and offering them tea and sweets in her cozily decorated living room. “My neighbor from South Africa wonders why they call this a deprived area.”

Petra Stienen, author and senator for the social-liberal party, is on the tour out of curiosity about “these kinds” of neighborhoods, she says. “It can open people’s eyes,” she says, noting that tour visitors have an opportunity to talk to people they might not otherwise meet in their own day-to-day lives. “Once you get to know the people here, you can see the enormous potential of this neighborhood. I just hope that the authorities will continue to invest in education and job opportunities.”

During a stop at a football court, social worker Yassine Abarkane, 27, shows the visitors some of the exercises they do to encourage youth to have a healthy lifestyle. “It’s more expensive to eat healthily,” he says. “And many parents have other stuff on their mind.”

The second-generation immigrant struggled to find placement before interning at the Stagehuis youth center (Internship House) next door. “A foreign surname together with an address in the Schilderswijk, often means you’re 0-1 behind.”

He also heads the Buurtbroeders (Neighborhood Brothers), a group of boys who work to improve the district’s safety and living conditions by talking to the rowdy youth loitering in the streets. During the 2015 riots, they helped restore the peace. “The rioters told us the police discriminate against them,” says Abarkane.

Earlier this year, Abarkane and his friends acted in a play about the boys from their district who joined the Islamic State in Syria. They all know someone who has left The Hague to do so. Of the approximately 270 Dutch fighters, 57 come from the city.

Several mothers whose children left for Syria have approached Karima Sahla, 42, another Schilderswijk resident and director of Steunpunt Sabr, an organization that helps migrant women. Last year, she set up a training program to help mothers recognize when their children have been radicalized, and to prevent them from leaving to fight abroad.

“I used to be reluctant to speak to the media because of all the negative stories about our quarter,” Sahla says. “But now I’ve decided to try to change the perception. It’s not all moonlight and roses here, but many things have improved in the past few years. Despite everything the media says about us, many of us work hard to make the best of life here.”

Thessa Lageman is a Dutch journalist, copywriter and photographer who has lived in Tunisia, Kuwait and Egypt and is now based in the Netherlands. Her topics include international development, economy, migration, travel and the environment. She has written for Al Jazeera English, BBC, The Atlantic's CityLab, The Sydney Morning Herald and many other publications.

Follow Thessa .(JavaScript must be enabled to view this email address)