Growing and Selling an Equitable Local Economy in Detroit – Next City

Growing and Selling an Equitable Local Economy in Detroit 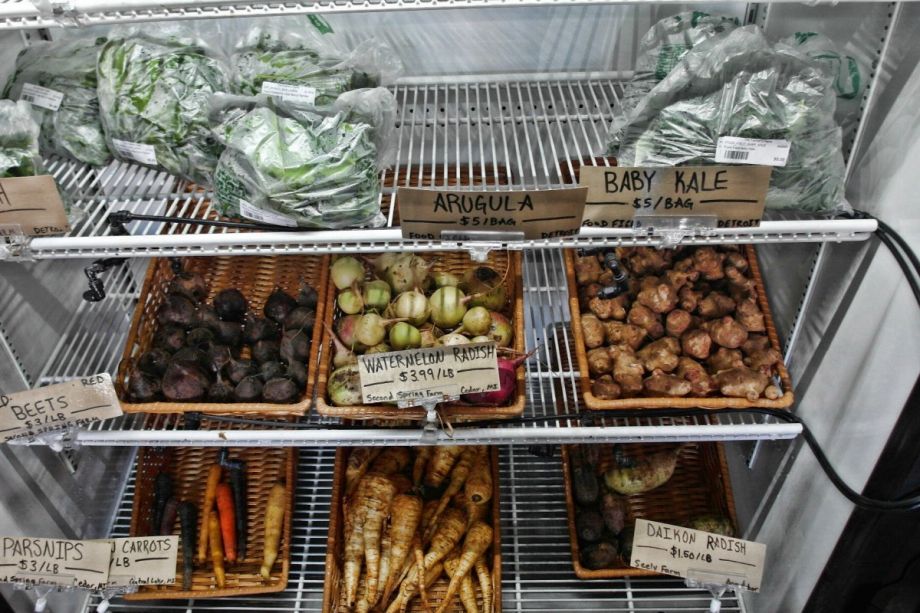 Despite all the hype over Detroit’s “come back,” “revitalization, “renaissance,” or whatever other superlatives that business reporters so often tout in development stories, the city’s dearth of healthy grocery options in many neighborhoods remains conspicuous to most who live there.

There are plenty of corner liquor stores (known colloquially in Michigan as party stores), selling all manner of unhealthy snacks and maybe a small selection of produce on the verge of spoiling at a high markup. But by and large residents to seek outside of the city limits for their grocery needs.

Each year, $178 million leaks out of the city and goes to suburban grocery chains, according to 2014 data from the Detroit Economic Growth Corporation.

That’s what The Farmer’s Hand sought to address when it opened its doors in 2016, in a gentrifying neighborhood with no shortage of craft breweries, pricey restaurants and micro-distilleries, but nevertheless lacking a proper grocery store.

Founders and co-owners Kiki Louya and Rohani Foulkes believed in the idea of providing fresh produce, dairy, meats, and a curated selected of dry goods, as well as a small cafe featuring coffee and ready-made breakfast and lunch options — all in a compact corner store where folks can forgo the car and instead walk or cycle to pick up essentials.

The store represents local in every way it can, including the seasons. Everything from the fingerling potatoes, the charcuterie to the kombucha and bottles of artisan olive oil, all comes from Michigan sources and many of the products come from within Detroit city limits. During the colder winter months, root vegetables tend to be high in supply, while the fall months might feature Michigan’s famous apples. The 100-plus suppliers that work with the market are small-to-mid-sized vendors that adhere to humane food practices.

“When they run out, it’s nice, I get a text message, we can cut it and bring it right down the street,” says Greg Willerer, who, along with wife Olivia Hubert, own Brother Nature Produce, an urban farm just north of the market-cafe. “When you buy from Whole Foods, it’s already 10 days old … Here, it’s hours old.”

What customers don’t necessarily see is the impact the market has on its own suppliers and employees. The business model emphasizes sharing profits with the very producers who source the food, working with producers on a consignment basis. Vendors get back 70 cents of every dollar sold at The Farmer’s Hand, a stark contrast to the 17 cents for every dollar ratio at large scale supermarkets. What’s more, they set their own prices. Full-time employees are also paid a living wage and receive healthcare benefits.

“By working on consignment with farmers, we’re respecting the work that it takes to grow their products,” says Foulkes.

Foulkes says their model is about respecting the work of farmers.

“There can be a disconnect between what people think a product is worth and what they want to spend on meat and dairy. We’ve gotten used to that traditional way of purchasing,” Foulkes says. “So there’s a little bit of relearning on both sides learning what it takes on both.”

Louya, a native Detroiter who is African American, and Foulkes, originally from Australia, were inspired by similar models at the Argus Farm Stop in nearby Ann and Local Roots in Wooster, Ohio, both of which buy directly from the farms and producers they work with. Argus Farm Shop vendors receive 80 percent of the items and they set their own prices. Local Roots farmers see 75-82 percent of each dollar, and relies on volunteers and community support to keep costs low.

Outside The Farmer's Hand market and cafe. (Photo by Serena Maria Daniels)

In just over a year in business, it’s too soon to tell the long-term impact this model has on vendors, but Louya and Foulkes are already expanding. Within the same building, later this spring, Louya and Foulkes are opening Folk, a stand-alone, 24-seat restaurant that will expand upon the original space’s offerings of breakfast and lunch, coffee and espresso from Michigan coffee roaster Hyperion, and a counter featuring Michigan-based Reilly’s Craft Creamery ice cream. With the second brick and mortar space, Folk is also creating additional employment opportunities.

The question remains, can a business like this — with attention paid on locally-made products, an equitable pay model for vendors and living wages for employees — sustain itself in a city with a high poverty rate? Not far away, in the city’s Mexicantown neighborhood, Detroit Farm and Garden, an urban gardening supply store, recently announced that they would be shutting down operations after a six-year run.

Willerer and Hubert hope that customers will see the value that products like Brother Nature and others sold at The Farmer’s Hand bring to the table, not just in terms of flavor.

“My wife says this and sometimes it makes people cringe, but stuff that we grow, that they sell, isn’t grown by slaves,” he says. “If you look at the stuff at Meijer, maybe that 5-ounce bag of salad mix is $3. Ours is $5, and ours is only hours old. Our stuff has no lettuce, has its own flavor, it’s just a superior product, it’s only a little bit more expensive.”