Greetings From the Gayborhood — and Beyond – Next City

Greetings From the Gayborhood — and Beyond 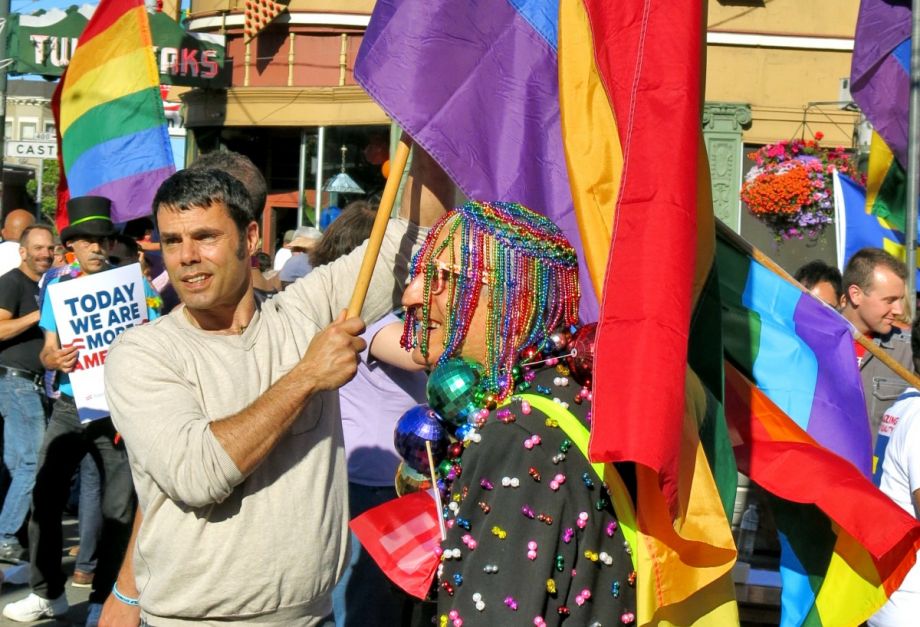 Celebrants in The Castro cheering the Supreme Court's declaration that the Defense of Marriage Act was unconstitutional in 2013. (Photo by torbakhopper / CC BY-ND 2.0)

Recently, the San Francisco Historic Preservation Commission unanimously supported a resolution to establish a new cultural district in the Castro. If it is approved by the Board of Supervisors and the Mayor, the Castro LGBTQ Cultural District will buffer some of the destructive effects of gentrification on the city’s famous gayborhood.

“The Castro is a living and breathing geographic and cultural area with rich political, social, economic, and historical significance to the LGBTQ community,” said Tom Temprano, legislative aide to Supervisor Rafael Mandelman. Temprano added that the area has been recognized “worldwide for half a century as a symbol of LGBTQ liberation and as an enclave for LGBTQ people to find safety, acceptance and chosen family.”

This designation is well-deserved — and long overdue. But when we talk about sexuality and the city, as San Franciscans are doing right now as well as countless others who are celebrating World Pride and the 50th anniversary of the Stonewall riots, why do we imagine that our cultural homes are confined to just one part of the city? The Castro in San Francisco. The Village in Toronto. The Chueca in Madrid. Le Marais in Paris. Le Village Gai in Montreal. That’s where you go if you want to find the gayborhood. Are queer world-making practices really so limited?

As a sociology professor, I have studied the cultural, political, and spatial expressions of sexuality my entire career. When I took a close look at US census data for my new research, I found that our assumptions of spatial singularity don’t map onto how LGBTQ people actually live. Places like the Castro are worth celebrating and preserving as cultural districts, but we need to think beyond a false binary of the gayborhood versus all other undifferentiated straight spaces. I propose that we shift our framework away from a single gay enclave to the concept of cultural archipelagos.

Consider lesbian geographies as one example. Sometimes women’s spaces overlap with the more visible, gay male dominated districts — but they are also quite distinct. Census numbers show that lesbians and gay men both locate in large numbers in Provincetown, Rehoboth Beach, and the Castro. But coupled women live in less urban areas at greater rates than men. In addition, all their neighborhoods are less concentrated overall and have a lower median price per square foot. This gives lesbian districts a quasi-underground character and makes them seem hidden.

Family formation is an important part of the story as well. According to the Williams Institute, more than 111,000 same-sex couples are raising 170,000 biological, step, or adopted children. Among those individuals who are younger than 50 and living alone or with a partner, nearly half of LGBT women (48 percent) and a fifth of LGBT men (20 percent) are raising a child under the age of 18. Among coupled households specifically, 27 percent of female and 11 percent of male couples are raising children. Gayborhoods often offer single-occupancy units at high rents. This steers many more women, and some gay fathers as well, to different parts of the city or to non-urban areas altogether.

Same-sex families constitute their own unique components of cultural archipelagos, for that matter. Childrearing among same-sex couples is most common in the Southern, Mountain West, and Midwestern parts of the country. The top five states with the highest proportion of same-sex couples with children include Mississippi (26 percent), Wyoming (25 percent), Alaska (23 percent), Idaho (22 percent) and Montana (22 percent). When we examine metro areas, we see that same-sex families cluster in economically diverse areas adjacent to regions that have a large population center.

Yet another example comes from where queer people of color live. In a Village Voice story titled “The New Gay Neighborhoods” — notice the plural — Michael Lavers describes Jackson Heights in Queens as “an enclave for Latino gays.” He dubs it “Hell’s Cocina — the city’s main Latino gayborhood.” Lavers also notes that Fort Greene in Brooklyn has become “a bastion of gay Black professionals,” so much that some locals call it “Chocolate Chelsea.”

According to the census, African-American individuals in a same-sex partnership live in areas where there are higher overall populations of other African-Americans, rather than areas that have large clusters of lesbian, gay, and bisexual people. More than one out of every four of African-American same-sex couples lives in Georgia, New York, Maryland, and North Carolina. This clustering is evident at the county level as well. For example, Baltimore City has 4.15 same-sex couples with an African-American as the head of household for every 1,000 households in the city — the highest ratio in the country. Seven of the next nine top counties for LGB African-American couples are in the south — not the northern states we stereotypically consider gay-friendly. These southern counties include Lee (South Carolina), Bamberg (South Carolina), Clayton (Georgia), Macon (Alabama), DeKalb (Georgia), Holmes (Mississippi) and Fulton (Georgia).

We must unreservedly recognize the gayborhood. They allow queer people to find each other for friendship, fellowship, sex and love. Gayborhoods incubate unique cultures, political perspectives, organizations, rituals, and styles of socialization. At the end of a long day, they promise a sense of safety from discrimination and an opportunity to center and celebrate queerness. The more we look, the more we see that gayborhoods have a hand in every aspect of modern life: from strategies, like rainbow crosswalks, that city officials use to commemorate their local district to the shaping of real estate values; from the institutional development of queer communities to their civic engagement; and from pride parades to protests and electoral influence.

But it’s time that we also recognize the cultural archipelagos in our midst. Based on a nationally representative sample of 1,197 self-identified LGBTQ American adults aged eighteen years or older, the Pew Research Center found that 12 percent currently live in a gayborhood while 14 percent have lived in one at some point in their life. The pollsters also found that 72 percent of respondents have never lived in a gayborhood. How do we promote and preserve the diverse places that queer people call home?

I think San Francisco’s approach is exemplary. The city has recognized six cultural districts already, two of which preserve the creative place-making efforts of queer people in the city: Compton’s Transgender Cultural District, the world’s first district designed to stop the displacement of trans people, and the Leather and LGBTQ Cultural District in the SoMa neighborhood. The Castro will be the third district dedicated to celebrating LGBTQ communities. This is precisely my principle of cultural archipelagos at work in planning policies on the ground. A similar ethos of spatial plurality is expressed in the National Park Service’s LGBTQ Heritage Theme Study, a 32-chapter, 1,200 page masterpiece which explores the spaces and places that queer people have occupied and frequented.

Embracing the notion of archipelagos does not require us to suppress or subordinate the importance of the gayborhood but rather to see it as one part of a dynamic chain of LGBTQ islands of cultural significance, all of which contribute to the vitality of our cities.

Amin Ghaziani is Professor of Sociology and Canada Research Chair in Sexuality and Urban Studies at the University of British Columbia in Vancouver. He is author or editor of A Decade of HAART, The Dividends of Dissent, There Goes the Gayborhood?, Sex Cultures, and Imagining Queer Methods.