Greensboro’s Art-Dotted Greenway a Respite During COVID-19, and an Economic Engine After – Next City

Greensboro’s Art-Dotted Greenway a Respite During COVID-19, and an Economic Engine After 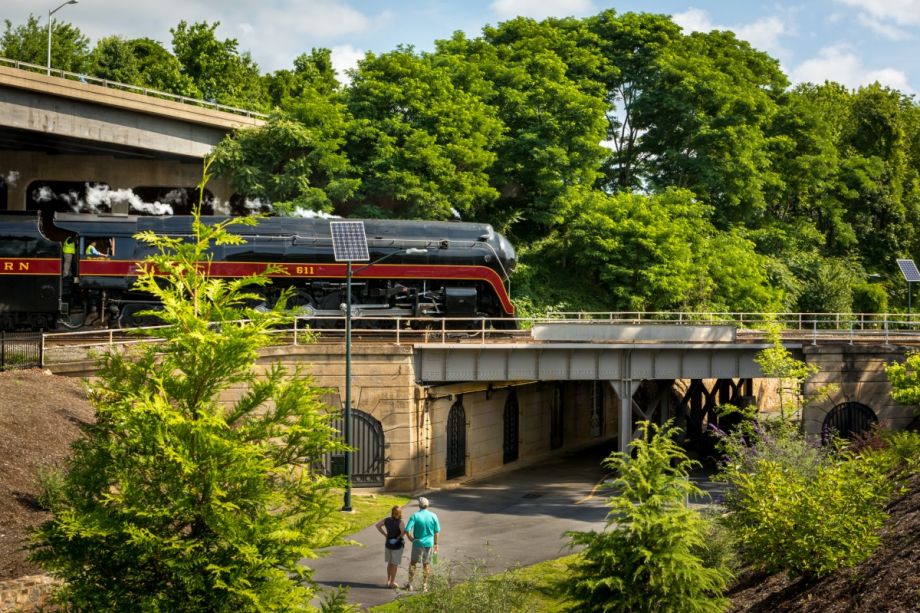 A disused underpass was converted into a connection to the Greenway. (Photo: Ted Partrick)

Editor’s note: Next City is covering solutions and challenges in Greensboro ahead of hosting our 2020 Vanguard Conference in the city. The conference takes place September 14-17, 2020.

As COVID-19 sweeps the world, outdoor activities in cities large and small across the U.S. have been limited to those that maintain a safe social distance. Luckily, residents of Greensboro, North Carolina have a nearly complete, art-filled greenway to enjoy as the state’s shelter-in-place order took effect on Monday, March 30. Not only has the Downtown Greenway become a timely recreational asset for the city, it has also proven to already be an economic driver for the city’s core, bringing with it $502.5 million in completed and planned investment.

“Downtown Greensboro, like so many cities across the country, experienced a decline when department stores moved out to shopping centers and suburbs,” says Dabney Sanders, the greenway’s project manager with Action Greensboro. “The city has had a period of fits and starts of revitalization since then until one in the early 2000’s really stuck.”

In 2006 Greensboro adopted a BiPed Plan that recommended an addition of over 400 miles of trails and greenways. The Downtown Greenway, once complete near the end of 2021, will be composed of a four-mile loop encircling the city’s center. Currently just two sections, comprising 1.5 miles of the route, are open, but a detour route makes a loop still possible to complete. In the end, the route will connect to more than 80 miles of other trails and greenways including the Mountains-to-Sea Trail, a 1,000-mile hiking trail stretching from the Great Smoky Mountains to the Outer Banks.

Even though the greenway is only partially complete, it’s already generating some of the economic development its creators were hoping for. As of December 2019, the $8.5 million already spent had yielded $215 million in investment, exceeding the $5-$12 return on each dollar spent that Action Greensboro was expecting the project to achieve.

The loop has brought “the first grocery store to open in 30 years in downtown,” Sanders says. The Deep Roots Market co-op used to be located slightly farther out of downtown, “but because of the greenway and knowing it was in line with their ideals and values [of walking and biking] as a natural co-op,” it influenced their decision to relocate to their current location. Sanders also notes that restaurants and breweries have opened up along the route as well.

While economic development was a central element of the plan, Action Greensboro took a build it and they’ll come approach. “The strategy was really building the Downtown Greenway knowing that people tend to want to live and work in proximity to facilities like that,” Sanders explains. “Marketing the value and power of what a greenway can do for the community has driven the market.”

Outside of the business sector, Greensboro’s greenway has also been a showcase for local and regional artists, some of whom have gotten their own little economic boost in the form of additional commissions thanks to the exposure they’ve gotten from the project.

The loop is dotted with public art throughout, but is particularly anchored in four pieces at each cardinal direction corner of the trail dubbed cornerstone works. “Recognizing that the future is going to look different, how might the [city’s] past inform the future?” wonders Barbara Peck, the public art consultant for the Downtown Greenway. “Public art would be a great way to tell that story.” A slice of the greenway’s budget as well as local foundations foots the bill.. So far three corners are complete as the southeast cornerstone moves into the commission phase.

As another example of the benefits the project has brought to local artists, Peck tells of ongoing collaborations between artists and city departments that have resulted from the Downtown Greenway project. Because the cornerstone project on the northeast section of the loop included the daylighting of a stream that had been relegated below ground, working alongside the city’s water resources department was required. Part of that project included putting up signage discussing daylighting, which led to working with various garden clubs and herb societies to create a suitably natural area around the stream that promoted water quality.

“Because of that project’s successful collaboration … another North Carolina artist is working with [the] water resources [department] to concept another project,” Peck says. “Water resources saw it as a successful way to educate the public about the work that they do.”

From supporting artists to bringing businesses back to Greensboro’s downtown, the city’s greenway is well on its way to achieving results thanks to the partnership that underlies it. “I would just emphasize the importance of the public-private partnership between the city and Action Greensboro that made this happen,” Sanders says. “I don’t think either of us could have done this on our own.”