Green Roofs Are Getting a Big Trial in Hoboken – Next City

Green Roofs Are Getting a Big Trial in Hoboken 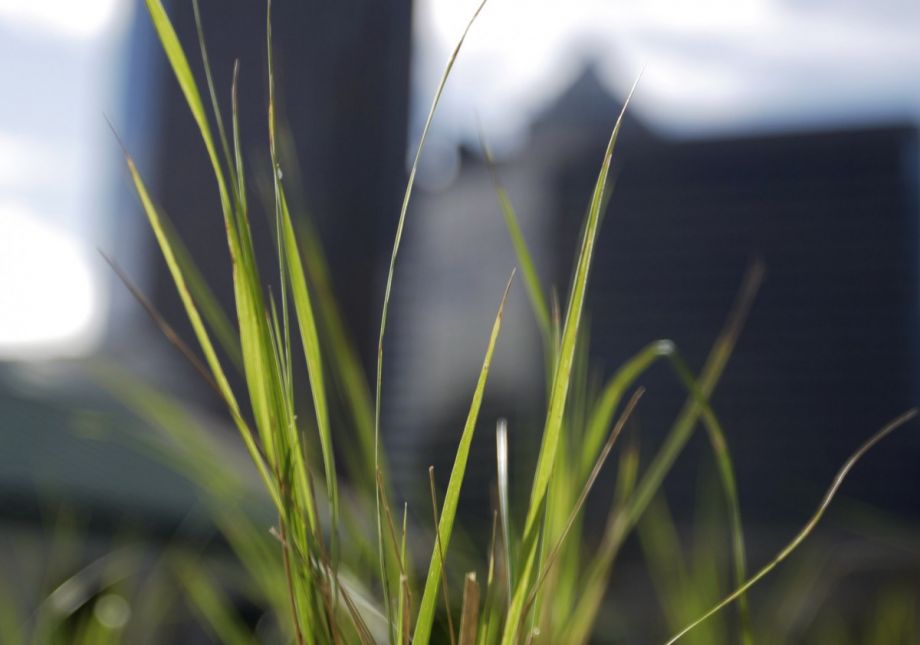 The movement toward green building and sustainability-minded development is at an odd crossroads. On one hand, some progressive cities have made regulation strides toward more energy-efficient and less environmentally harmful building practices, while a viable industry has grown up around green construction and roofing materials. On the other hand, the mounting damage of climate change can make sustainability efforts look like window dressing, and the prospect of building green, especially when it comes to retrofitting existing buildings, remains costly.

Still, daunting as the climate threat may be, the environmental benefits of green building and stormwater management are clear. Green roofs in particular have been shown to reduce rainwater runoff, filter pollutants, reduce energy usage and cool cities overall, diminishing the “urban heat island effect.” They also benefit bird populations and have even contributed to an uptick in urban birdwatching. This fall, researchers at the Stevens Institute of Technology in Hoboken, New Jersey, are launching a “living laboratory” on the roof of a new campus building, with hopes of learning what types of green roofing materials work best.

The lab consists of various green roof setups, rain gardens and planters designed for optimal stormwater management called “bioretention” planters. The four planters are tricked out with soil sensors to monitor how much water, flowing out of a downspout, is captured by the “medium,” the mix of sand or soil that the plants take root in.

On top of the roof are 19 different green roof setups — picture a small tabletop garden — each with a different engineered medium. Researchers hope that, by the end of the fall semester, they’ll be able to start analyzing data about which mixes work best for retaining water and filtering pollutants. Each setup is duplicated, for a total of 38 setups, so that the results can be verified.

“The hypothesis for our research is that the aggregate type matters,” says Elizabeth Fassman-Beck, an associate professor at Stevens and co-author of the book “Living Roofs in Integrated Urban Water Systems.” “In other words, not all sands or rocks are created equal when it comes to influencing water movement.”

Fassman-Beck, who has been working on getting the lab established over the summer with a small army of undergraduate students, says she has been looking for a place on campus to conduct this type of research since joining the Stevens faculty four years ago. (She’s done similar research in Auckland, New Zealand.) The university approached her about building a rain garden when developing another new facility recently. She was happy to oblige, but realized that in cities like Hoboken, rain gardens aren’t the best solution for stormwater management.

“In Hoboken, the number one issue is parking, and to build a rain garden you need ground-level space,” Fassman-Beck says.

Bioretention planters, which are mobile and capture water out of spouts similar to the way rain gardens do, are a more promising solution for high-density areas, she says. But perhaps the greatest opportunity for stormwater management in cities is on the rooftops. One concern about green rooftops, though, is that while they help with water retention, there’s some evidence that their runoff has higher levels of nitrogen and phosphorous than the rain that falls on them.

Fassman-Beck expects the lab to show results relatively quickly. But in order to put the findings to good use, more cities are going to have to adopt stronger green roof regulations, she says. Last year, San Francisco became the first U.S. city to require green roofs on some new development, according to National Geographic. Toronto adopted green roof requirements in 2010. But many cities’ policies are built on density bonuses — if they have green roof policies at all.

Philadelphia amended its zoning code to allow for denser development in certain residential and commercial buildings that include green roofs in 2015. The city also has a tax credit for green roof construction. But neither policy has created a significant uptick in green roof construction, and some wealthy communities have found ways to carve themselves out of the incentives altogether, as a way of capping density.

The cost of green roof construction is steep enough to make many cities wary of mandating them for new buildings. But even if green roofs became standard on new construction, the existing built environment still accounts for the mass of impervious surface in cities, Fassman-Beck points out. The Stevens Institute of Technology and the city of Hoboken have been enthusiastic about both the possibilities of the research and the prospect of implementing more stormwater management infrastructure, Fassman-Beck says. But there’s a long way to go before green roofs can live up to their potential.

“Nobody would do any of this if it weren’t for regulation,” Fassman-Beck says.