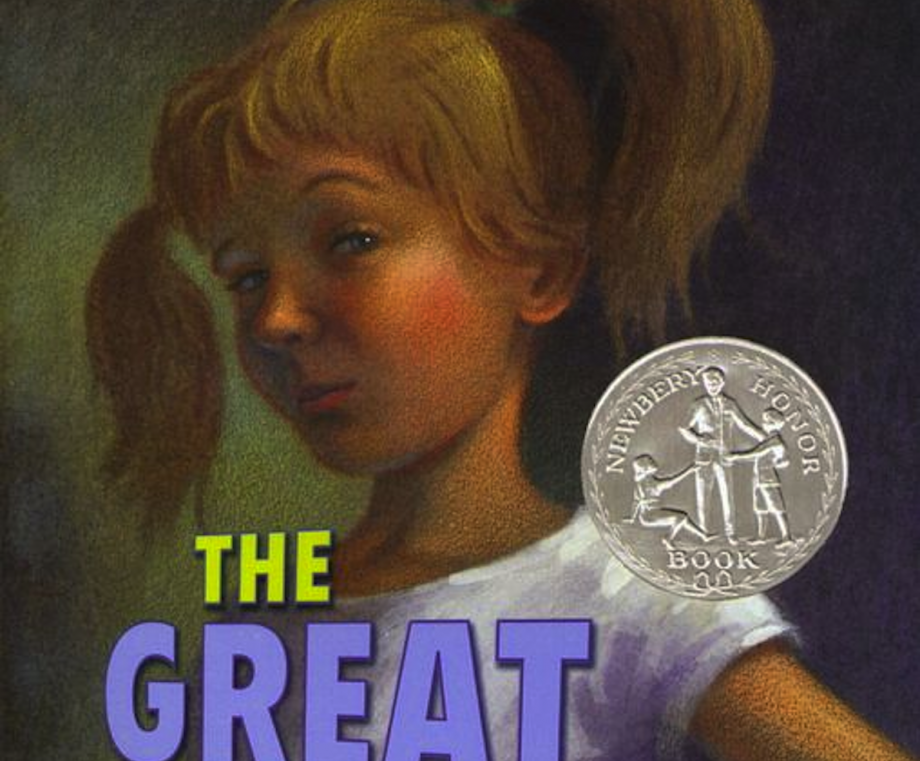 It’s not easy growing up. To be on the cusp of adulthood — or even in your pre-teen years — is to become attuned to the places we come from. Just as we’re discovering ourselves, we are also learning about both the possibilities and the pitfalls of our community.

There is a whole canon of classic coming-of-age literature that is embedded in city life, including A Tree Grows in Brooklyn and The Catcher in the Rye. But the 10 great books below also deserve attention. Each explores the challenges of urban life for young adults. What role do older kids and teenagers have in it? What can they change and what must they accept? How do you react when your urban reality and your ideals don’t match up?

Don’t forget to also look up my picks on city fiction for both adults and children!

Eleven-year-old Gilly (short for Galadriel) is an obnoxious and brilliant foster kid who sabotages every home she’s sent to because she hates them all. We meet her as she’s on her way to the Trotters, a particularly strange family. Put off by them, Gilly devises a scheme to connect with her real mother out in California.

Katherine Paterson’s 1978 classic won a truckload of awards, among them the National Book Award, the Newbery Honor medal, and the Jane Addams Book Award. For once, the award-makers got it right. Paterson packs so much into a slim book, telling a story simply and with grace. The Great Gilly Hopkins is hilarious, whole-hearted, disarming and utterly original. It is especially suited to readers who are weary of stories that romanticize youth by rendering kids as either adorably mischievous, sagely innocent, and/or beings who have a thing or two to teach adults.

Nope, not that Hollywood: It’s a barrio in Las Cruces, New Mexico. It is 1969, a time of cataclysmic change, and Sammy Santos isn’t immune. His first love, Juliana, dies early in the novel and Sammy must figure out how to remake his life over his senior year of high school. He also has to care for his sister and widowed father, and figure out where he stands as his generation protests the Vietnam War, experiments with drugs, and comes out as gay. Will studious Sammy escape Hollywood and go to college? Or will he never really be able to escape the barrio?

With humor, tenderness and crackling Spanish-English dialogue, Sáenz depicts the time of life when we wise up to the full weight of the place we come from. He is excruciatingly honest about both the power and the limits of our choices, and the tension that comes from the question: How long do we wait until things get better? 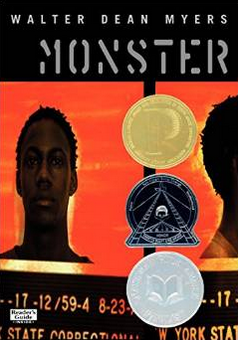 Steve Harmon is only 16 years old, but he’s on trial for murder. The prosecutor is charging him as an accomplice in the fatal shooting of a convenience store clerk during a robbery gone terribly wrong. “Monster” — that’s how the adults in the courtroom describe him. Is he? Where does responsibility fall? What does accountability look like, especially for teenagers? Heavy questions of crime and punishment shadow this suspenseful text, which winds its way toward a tense conclusion: We find out whether the jury declares him innocent or guilty.

Monster isn’t narrated like a traditional book; it reads as a screenplay that Steve is writing for his high-school video club. (The typeface is in a handwriting font.) His script is interspersed by Steve’s personal journal entries. This collage style evokes how even Steve himself is caught in the tension between how he is “seen” by others, and who he really is. Myers’ book was both a bestseller and a finalist for the National Book Award.

Growing up on the Spokane Indian Reservation, Junior is a self-proclaimed geek who loves making cartoons. He makes a lot of enemies when he transfers off the reservation for his freshmen year — to an all-white farm school that has an Indian as its mascot. Only 20 miles from home, Junior is a stranger. Worse, he becomes a traitor to those still living the life he was supposed to live: his angry best friend, his parents, his neighbors, his sister. When the two schools play basketball in a home game for the Indian team, the crowd on the rez is united in fury against Junior. 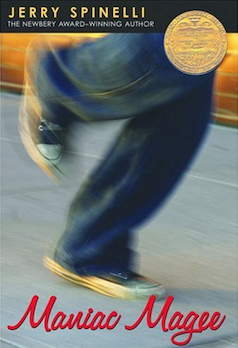 They call him “Maniac,” because Jeffrey Lionel Magee doesn’t live an ordinary life. A freak accident made him an orphan, and Maniac spent eight years living with his aunt and uncle, who constantly fight. He was unhappy so he ran away … and now he runs everywhere he goes. He finds his way to Two Mills, Pennsylvania, a segregated small town. Now the curious kid who doesn’t like pizza and can untie the most impossible knots finds himself in the nexus of the community’s simmering racial tension.

While it’s told in the style of a high-stakes yarn, a sort of tall tale, Maniac Magee explores real civic questions — from racism to how a community treats its eccentrics. And it does so by focusing on the town’s children, not as victims of urban tension but as empowered citizens who have the capacity to create change. Spinelli’s 1990 novel won the Newbery Medal.

Toswiah Green’s family has moved far from Denver, Colorado, and that’s hard enough. But even harder is that she has a whole new identity. Toswiah is no longer Toswiah: Her new name is Evie Thomas. Her whole family has new names, in fact. Mr. Green is a police officer, and after he witnessed two of his white colleagues kill a young black boy, he made the tough decision to testify against them. Now, the whole family is uprooted as part of the witness protection program. Each one of them finds a different way to cope. Toswiah’s mother holds tight to religion. Her older sister nurses a secret plot to escape. And her father, under deep pressure, becomes depressive. And 12-year-old Toswiah? What will she do? Who is she, really?

Woodson’s novel, a National Book Award finalist, moves forward and back in time. Published nearly 15 years ago, its original look at police brutality feels all too resonant in today’s cityscape. 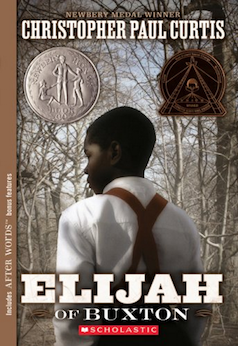 Elijah is the first free child born in Buxton, a settlement community of fugitive slaves in Canada just across the border from Detroit. But he might be even more famous for his fear of snakes — or for that time he threw up on Frederick Douglass. But Elijah is going on the adventure of his life after an ex-slave calling himself “Reverend Zephariah W. Connerly the Third” steals money from Mr. Leroy, who had been saving so he could buy his family out of slavery. Elijah joins his friend on a dangerous journey into America to track down the corrupt preacher. For the first time, the boy witnesses what slavery is really like.

Buxton is a real-life community of ex-slaves founded in Ontario in 1849, and Curtis brings it to life through the eyes of a child. Elijah’s gullibility and self-deprecation bring wit to an eye-opening story that takes the unusual tack of beginning in a free country and heading back into an enslaved nation. And Curtis is phenomenal at drawing out Buxton: a chosen community of everyday foibles, but unusual in that each resident holds “scars and peculiarities” deep within them. How do you create a new city when mass trauma still weighs on every citizen?

Being 16 years old shouldn’t be this hard. But here in Houston, Danny Vo is torn between the values of his high-school classmates and his Vietnamese family. Denial gets tougher when Danny wins the heart of his longtime crush, Tiffany — whose brother happens to be a white supremacist. And Danny’s cousin Sang Le arrives in town to live with the family after having spent years in a Communist “re-education” camp.

Popular with ESL teachers, Garland’s novel explores intersecting identities and our need for belonging in civic spaces. What does success look like for immigrants? And what does failure look like? Descriptive detail also paints Houston vividly — a city that was officially designated in 1975 for Vietnam refugees and today has the second-largest Vietnamese population in the United States.

Let’s be clear: Every book by Beverly Cleary is worth reading. Her insight, humor and subtlety are unparalleled. But Ramona and Her Father, the fourth of the Ramona books, stands out because of its riveting portrayal of how unemployment impacts a family. Ramona is a second-grader in Portland when her father comes home to announce that he’s lost his job. Everybody must sacrifice. Even the cat Picky-Picky has to get used to cheap food. Ramona, meanwhile, sets it upon herself to cheer up her father, who has grown depressed. Between half-hearted job applications, he is watching too much television and chain smoking.

Not only does Ramona and Her Father portray Portland, Oregon, in a time before it was “Portland” — the novel was published in 1977 — but the book is also an unnervingly realistic portrayal of the precariousness of working-class family life. It also underscores how our youngest citizens are hardly ignorant of adult stressors. And in the sub-plot of Ramona’s sister Beezus interviewing an elderly neighbor for a school project, Cleary shows how coping plays out across generations. 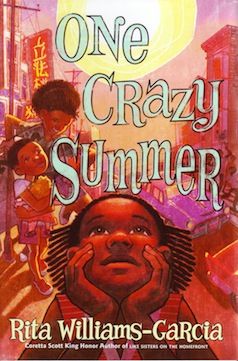 Delphine, Vonetta and Fern are three sisters growing up in 1968 Brooklyn with their grandmother and father. Delphine, who is 11, has hazy memories of her mother Cecile who left them seven years before. But one summer, the sisters are sent to Oakland, California, to stay with their mother. Cecile is a poet who joined the Black Panther Party, and she appears unmoved when her children arrive. She is aloof as she sends them out to Chinese restaurants and the Panthers community center, and she forbids her daughters from entering the kitchen, where she writes.

As this uncommon story unfolds, each of the girls find her own kind of empowerment while living among a community that has dedicated itself to fierce justice. Williams-Garcia writes beautifully about how forgiveness fits into that picture, if at all. This challenging story won the Coretta Scott King award and was a finalist for the National Book Award. It was followed up with a sequel set in Bed-Stuy called P.S. Be Eleven.