Graphic: Five Major Bike-Share Systems, and Their Naysayers – Next City 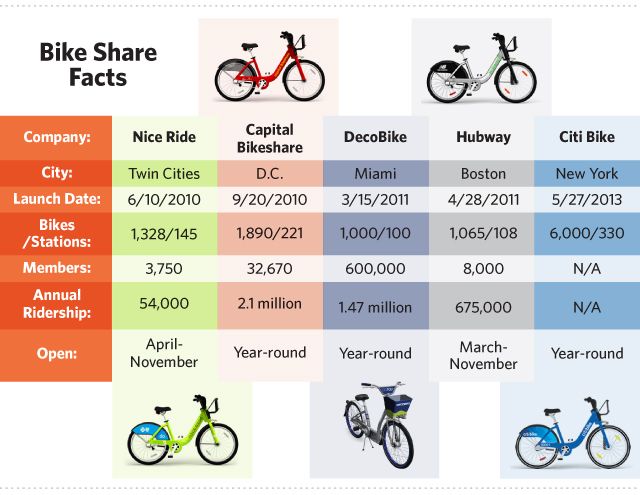 If you haven’t noticed by all the hand wringing and indignant opinions flying around the Internet of late, New York City is set to have its two-years-in-the-making bike share program operational by the end of this month.

Truth is, New York has come late to the bike share game. U.S. cities big and small have had successful bike share programs running for one, two and sometimes even three years already. The infographic above gives some background on five of the country’s most popular bike share systems. Below we have more info, including each system’s current expansion plans and, for yucks, some of the most egregious scare quotes about bike share that have appeared in local media.

The first major U.S. cities to launch bike share were Minneapolis and St. Paul, whose residents have together enjoyed Nice Ride since June 2010. (Take that, coasties.) This forward-thinking effort in the Twin Cities has since grown to serve some 54,000 riders taking out bikes during the eight-month season when the system is operational. According to an email from a Nice Ride spokesperson, the program will add 24 new stations in various spots — including along the Mississippi River and on the Lake Street and Hiawatha Light Rail corridors — by the end of this month.

Given that Nice Ride was among the earliest bike share systems to appear in the country, it came as something of a shock to find no local editorials foreseeing a war on cars or bemoaning capitalism’s death by slippery slope. But we did happen upon this reader comment on a July 2010 Star Tribune story: “Big Government run wild. What kind of nuts put together a ridiculous program like this? Our government is out of control, vote these bums out next November!”

The largest bike share system in the country, Capital Bikeshare, first appeared in Washington, D.C. in September 2010 (replacing the doomed precursor SmartBike). With nearly 1,900 bikes at 221 stations serving more than 2 million annual riders, these red-and-yellow vessels reign supreme in the bike share realm for the time being. By next fall Capital Bikeshare plans on expanding into Maryland, with 50 new stations to open in Montgomery County. It already serves Arlington and Alexandria, in Virginia.

Sooner or later in the bike share debate, there would be accusations of communism. “[A]cross the street from my house on Capitol Hill is a loud, clanging ‘Capital Bikeshare’ docking station,” Charles Hurt wrote in a May 2012 Washington Times column. “It is one of the locking ports for those fat, red communal bicycles you see peddled all over town by commune enthusiasts. (Say that fast, and it sounds like you are saying ‘commun-ists.’)” Clever wordplay, dude.

Something of an underdog on this list is Miami Beach’s DecoBike, which in just over two years has become the country’s second-largest bike share system. Within six months, according to an email from a spokesperson, DecoBike will move into the City of Miami with 500 new bikes at 60 additional stations.

But has bike policy ever incited riots? Michael Miller at the local alt-weekly Miami New Times seems to have thought so. “[O]nly time will tell how Miami Beach receives the bike share program,” he wrote in March 2011. “But we’re afraid it will be with beach cruisers set ablaze on the beach.”

New York couldn’t get its act together in time to beat out its perennial rival on the bike share front. Hubway launched in Boston in July 2011, moving around 675,000 Bostonions between March and November, depending on the weather.

In our search for scare quotes, the most extreme example we could find was this mild one from the Northeaster University college paper: “Hubway is a smart idea, but turning hundreds of new cyclists loose in the city without any rentable safety gear is a potential recipe for disaster.” But helmet laws might discourage cycling, August 2011 Huntington News editorial staff!

Which brings us to Citi Bike in New York, which should finally launch on May 27 as the largest bike share system in the country, with 6,000 bikes at 300 stations. In terms of expansions, may we suggest parts of the city that aren’t Manhattan or northwestern Brooklyn?

As for scare quotes — oh man, where to start? How about this gem from a May 2011 New York Post editorial: “Now will come the bike kiosks, and 10,000 rental bikes sure to visit perpetual terror — and too frequent mayhem — on New Yorkers of all circumstances.” Hide your families, New Yorkers. The city is about to become a scary place again.