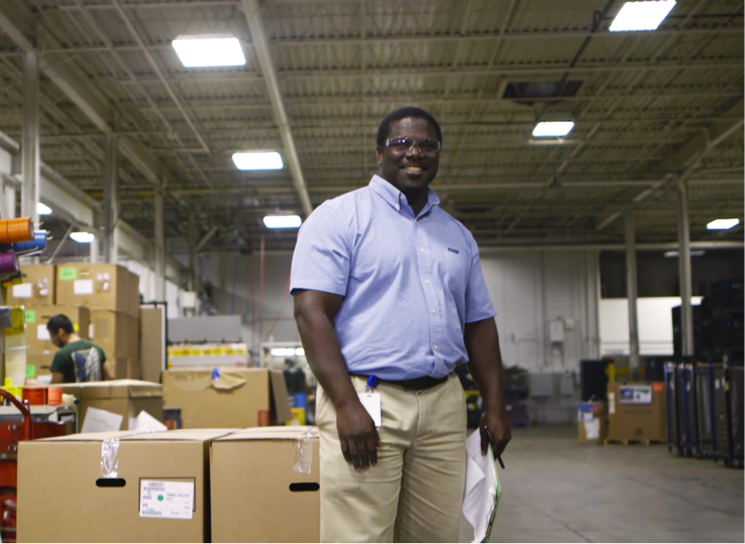 Seven years ago, Jahaun McKinley could not have imagined his life today — a thriving career, a place in his community as a mentor and role model to at-risk youth. That’s because as of 2009, McKinley had spent more than half his lifetime — 19 years — in prison. Now he’s part of a growing hiring trend that is solving western Michigan’s skilled labor shortage in unexpected ways. “When I came out, I didn’t have any work experience other than what I’d done while incarcerated,” says McKinley, who was 18 when he entered prison on a felony assault conviction. Soon the rejections piled up as he struggled to find a foothold in a job market that treated his criminal record like a scarlet letter.

Everything changed, however, when a local nonprofit connected McKinley to his current employer, Cascade Engineering — a Grand Rapids manufacturer that has been creating career pathways for those returning from prison for over a decade. Six years and two promotions later, McKinley oversees six of their plants as a Lead Manager and is one of their top employees.

“Jahaun is a phenomenal worker, but he was overlooked by other employers,” says Kenyatta Brame, executive vice president at Cascade, which currently counts more than 75 formerly incarcerated workers among their staff of 690.

Brame believes that Grand Rapids — and most of the country, for that matter — is full of Jahauns: people with disadvantaged backgrounds who would be a valuable asset to local businesses if given the opportunity and the support to do so. Cascade is working with nearby Butterball Farms to export this mindset to other companies in western Michigan through 30-2-2 — an initiative which will enlist 30 companies to employ two former inmates for two years a piece. Today the program has placed over 100 employees at 19 companies, and recently inspired local leaders in New Orleans to launch their own version of the program.

Brame sees the initiative, which will track wages, attendance and performance reviews for these workers, as a crucial step in changing the conversation around employing former inmates, whom Cascade calls “returning citizens.”

“We are committed to understanding the various barriers that keep people from being successful, and a criminal record is a big one for many in western Michigan,” Brame says. “We want to collect the data to prove what we already know here: employing returning citizens works.”

Eliminating Job Barriers Pays Off
Every year in the United States, more than 600,000 people — disproportionately African-American and Latino — are released from state prisons. Statistics suggest that up to 75 percent of them will still be unemployed a year later, and two thirds will be re-arrested within three years. Even when they find employment, men who have served time will earn 40 percent less on average per year than their peers who have not been incarcerated.

These trends aren’t just troubling for former inmates: Considering nearly one in three U.S. adults has a criminal record, this type of discrimination has a huge impact on local, regional and national economies. The Center for Economic and Policy Research estimates that the national economy loses $57 to $65 billion each year because of the underemployment and reduced output of people with felonies and prison records.

In western Michigan, this issue is most visible in the dwindling pool of skilled labor that has some local businesses concerned for their future sustainability. Though the regional economy has led the state in growth post-Recession, skilled labor shortages are already constraining work in the construction industry, with the energy, manufacturing and healthcare sectors projected to follow. It was this search for labor that spurred Butterball Farms to launch 30-2-2 back in 2012, says Carrie Link, assistant to the CEO at Butterball Farms.

“We as a business community need to understand that unless we cultivate a successful pool of candidates, we won’t have enough talent to manage our businesses,” Brame says. He sees connecting the 12,000 Michiganders released from prison each year to the training they need to take on jobs in the skilled labor force as an essential piece of a larger strategy to grow talent and boost economic growth in the region.

Cascade and Butterball Farms are also part of Talent 2025, an initiative of 100 companies in western Michigan that will cultivate skilled labor by ensuring that everyone in the region can access the training necessary to thrive in the 21st century labor market. The initiative is currently investigating how to meet the needs of a range of potential workers, including low-income residents, former inmates, high school and community college students, and people with learning disabilities.

Getting Inclusive Employment Right
Brame is quick to point out that connecting former inmates and other disadvantaged workers to opportunity is about more than giving them a job — it’s about ensuring that they receive the technical, logistical and community support that will help them succeed in a work environment that is usually completely new to them.

For example, because McKinley went into prison at 18, he emerged in 2009 with no work experience, save some janitorial and kitchen work he had done while incarcerated.

“I had nothing for my resume, but I knew I was a quick learner and I was really excited to work; for most employers that wasn’t enough,” McKinley says.

Fortunately, McKinley was put in touch with Hope Network, a faith-based organization and Cascade partner that provides job training, early work experience and logistical support to help recent inmates and other disadvantaged workers transition into the workplace. Hope Network’s Workforce Development Program helped McKinley land an initial position clearing vacant lots to build up his resume, which then helped him land his first job at Cascade.

“In prison I had never made more than $4.71 a day, and all of a sudden I was making $9.50 an hour,” he says. “When they said I could work 60 hours a week, I was so excited because I knew that meant I could expedite my learning and pick up the skills faster.” McKinley shadowed another employee for weeks as he learned the skills unique to plastic injection molding, and underwent Cascade’s 30-hour orientation.

Partnering with community organizations, training staff to be mentors to new employees, slowing down the onboarding process — these are some of the lessons that Cascade has learned in their long history of employing workers with disadvantaged backgrounds, which began in the 1990s after CEO Fred Keller attended a training on healing structural racism and started working with the Michigan Department of Human Services (DHS) to employ people on welfare.

Another major lesson from this work was the need to take environmental factors that could jeopardize attendance, such as issues with transportation, housing or child care, into account. Since the late 1990s, Cascade has co-employed (with DHS) a full-time case manager to help new employees troubleshoot these issues, which has dramatically reduced absenteeism and turnover.

Cultivating a workplace culture that builds community, addresses conflict and allows people to thrive professionally, emotionally and socially is also at the heart of Cascade’s methods. The company has an explicit anti-racism statement and hosts company-wide discussions on difficult issues affecting the community, including incarceration, structural racism and intergenerational cycles of poverty.

“We’re an anti-racism organization, which means we understand that race has an impact on a person’s employment because it affects how we interact as a community,” Brame says. “We challenge ourselves to discuss the hard things openly, and bring in mediators to do so.”

It was this open environment that allowed McKinley to share his past with his colleagues. Though Cascade keeps criminal history confidential to respect the privacy of all employees, the 30-2-2 initiative has helped create space for former inmates to speak up.

“Stigma about being incarcerated persists because our society doesn’t have a conversation around it,” McKinley says. “Being at Cascade has shown me that I can share my story and no one will judge me. My story has power.”