Where Do Grand Auto Boulevards Belong in City Design? – Next City

Where Do Grand Auto Boulevards Belong in City Design? 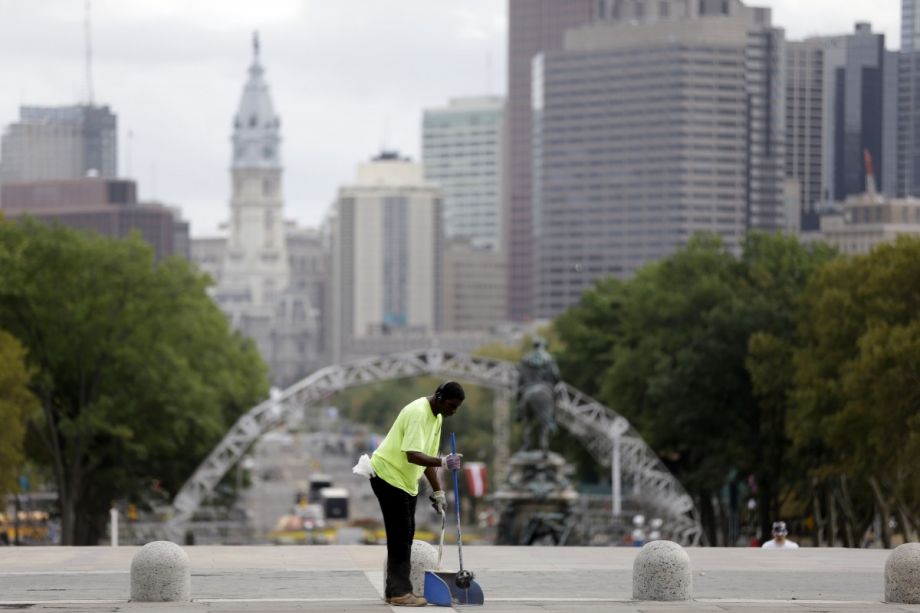 A workman sweeps the top of the steps of the Philadelphia Museum of Art after Pope Francis celebrated mass along the Benjamin Franklin Parkway in 2015. (AP Photo/Matt Rourke)

Over Labor Day weekend, thousands of young people crowded onto the Benjamin Franklin Parkway in Philadelphia to enjoy dozens of musical acts, drink price-gouged Budweiser and dance in the rain at the Made in America Festival. For many of them, I’m sure, it was the time of their lives. Clicking through the photo galleries compiled by local news outlets, I was reminded of the summer of 2005, when I first moved to the city, and the Parkway played host to the Live 8 concert and, two days later, an Elton John concert on the Art Museum steps. I lived a few blocks from the museum at the time, and remember it as an unhinged party of a weekend.

And yet, I think, that while it has become Philadelphia’s go-to space for big events, the Benjamin Franklin Parkway can only be properly absorbed through a drive, preferably down the middle of the six-lane stretch of road between the Art Museum and Logan Circle, late at night, when there aren’t too many other cars around. Depending which direction you’re heading, you’re facing down either a grandly lit urban fountain or a masterpiece of neoclassical architecture set on top of a hill. Mature trees line the route at even intervals. If you catch all the green lights, the whole drive is over in a couple of minutes. Like all the best aesthetic experiences, it’s fleeting.

Lately, there’s been a lot of talk about improving and “urbanizing” the Parkway, which is celebrating its centennial starting this month. Bright green bike lanes now line most of the strip, and there are two new pedestrian bridges and additional public spaces, thanks to a state DOT bridge repair project. While most urbanists agree that the effort fell short of substantial — why couldn’t they have just capped the central expressway entirely? — the green space is a small step toward making the Parkway a place that Philadelphians can enthusiastically put to daily use, whether they’re in a car, on a bike or pushing a stroller.

In 2013, the city hired PennPraxis, a planning and research center at the University of Pennsylvania School of Design, to create a new plan for the area. The result was called “More Park, Less Way,” a plan that envisioned more day-to-day vibrancy on the Parkway, with a greater variety of uses, roadways designed to calm traffic and encourage bicycling, and underused land dedicated for new urban parks.

“The space needs to be microdesigned a little bit more so that it can have some of these smaller moments,” says Julie Donofrio, managing director of PennPraxis. “If you could claim some of those bands along both sides, that are like access roads right now, that’s massive.”

To date, the primary result of the PennPraxis plan is what’s now called The Oval, the Fairmount Park Conservancy’s pop-up park and beer garden in a surface parking lot across from the Art Museum. The seasonal conversion has occurred each summer since 2013. This year, a team at PORT Urbanism designed the space in order to not only draw families to the Parkway, but to ask visitors what they envision for the space. The Fairmount Park Conservancy plans to use the feedback to inform designs for future pop-ups and, potentially, permanent changes.

It makes sense to try to claw some of the Parkway’s space back from automobile traffic. Currently, the roadway carries around 37,500 cars a day, and around 500 bicycles, according to data gathered by the Delaware Valley Regional Planning Commission. Pedestrians trying to walk from neighborhoods north of the Parkway into Center City have to cross at least four wide lanes of traffic — six in some places — with slightly different patterns and signals at every intersection. Pedestrians are dwarfed by the scale of the Parkway, which can make it feel unsafe.

Still, the grand scale was always kind of the point. In the late 19th and early 20th centuries, the Parkway was envisioned functionally as a straight-line pleasure drive that would transport people from the dense downtown to the open air of Fairmount Park. In his book “Building the City Beautiful: The Benjamin Franklin Parkway and the Philadelphia Museum of Art,” art historian David Brownlee writes that the Parisian boulevards that inspired the design of the Parkway “seemed to epitomize the urban environment of a great modern civilization.” In a generic way, Brownlee writes, such boulevards were symbolic of leisure, mobility and public life.

But what’s iconic about the Parkway is that it does not in any way epitomize the urban environment of Philadelphia. A largely flat city that hasn’t traditionally made great use of its rivers from a modern-day urbanist’s perspective, Philadelphia, with a few notable exceptions, is not known for its vistas. Its primary beauty is contained in the small-scale built environment of its historic neighborhoods. And so the Parkway, with its sweeping views, provides a tree-lined, fountain-studded counterpoint to the daily experience of the city.

I hesitate to profess any love for a piece of automobile infrastructure in 2017, when many cities are fighting a good fight to cut down on car ownership and redesign their streets for safe use by bikers and pedestrians. And it’s true that improvements on the Parkway’s edges will enliven the space, making it safer and more enjoyable for a greater number of people. But the scale of today’s urbanism, focused on the light touch and incremental improvements, is simply no match for that of our forebears. It’s hard to foresee the day when the Benjamin Franklin Parkway won’t be best enjoyed in an automobile, at full speed.