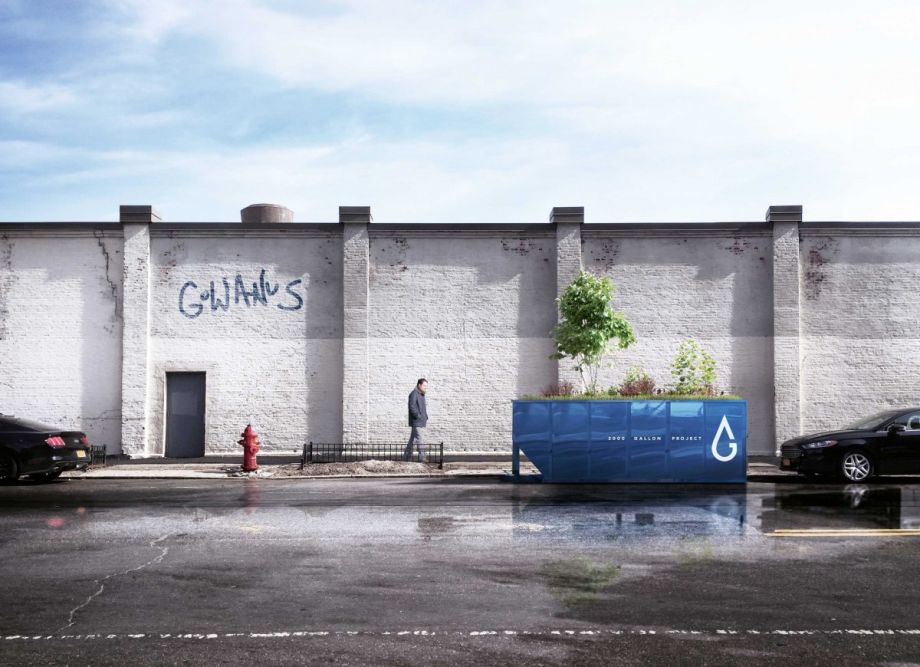 Dumpsters aren’t often a welcome addition to any neighborhood, but a community board in Gowanus, Brooklyn, voted unanimously last week to let a developer install 10 in neighborhood parking spaces this summer. That’s because these are no ordinary trash receptacles. According to Brooklyn Paper, they’ll be filled with soil and greenery that will help soak up stormwater before it reaches the Gowanus Canal.

Alloy Development, which is constructing a new headquarters in the neighborhood next year, has partnered with the Gowanus Canal Conservancy on the project, titled 2,000 Gallons, a nod to the amount of water each of the dumpsters will be able to hold. Stormwater currently gathers in a sewage tank beneath the notoriously polluted waterway but it frequently overflows, sending untreated wastewater into canal.

Each of the dumpsters will direct people to the 2,000 Gallon Project website, where they can learn more about the stormwater issue. As Gowanus Canal Conservancy Executive Director Andrea Parker told DNA Info, 377 million gallons of combined sewer overflow enter the canal each year. “Each 2,000-gallon planter helps visualize the scope of the problem,” she said. “Why we need trees, green roofs, bioswales and sewage tanks, and how each of us can pitch in, via rain barrels or shorter showers, to make Gowanus Blue.”

She was referring to the canal’s current color — more of a sickly green. The Gowanus is a Superfund site, in the midst of a federally-mandated cleanup. Earlier this month, city and federal officials announced they have agreed on locations for two additional underground tanks for storing sewage so that it can’t be washed into the canal by excess stormwater.

Alloy’s dumpsters may be alleviating only a small percentage of the problem, but the developer and Gowanus Canal Conservancy hope they will draw attention to the problem — and the myriad ways of addressing it. A floating island launched last fall is intended to filter out pollutants from the water. A “sponge park” that will sop up stormwater on the canal is also currently in the works. Come fall, the conservancy will replant the dumpsters’ greenery elsewhere in the neighborhood so they can continue to soak up runoff.

Alloy will cover most of the costs of the dumpsters, which will be installed starting July 4. Four will be located near Alloy’s property, and six will be distributed in parking spots around the neighborhood. The project is being installed under the Department of Transportation’s Street Seats program, which allows for temporary use of parking spaces as public spaces. Two of the dumpsters will also have seating.

“We always look for creative things to do in the community before we start construction of our projects,” said A.J. Pires, Alloy’s executive vice president. “In this case as we thought about what it means to live and work in Gowanus, it became clear that water management is a critical issue for Gowanus. We hope the project can help draw attention to the issue while we wait for the larger remedies the government is planning.”