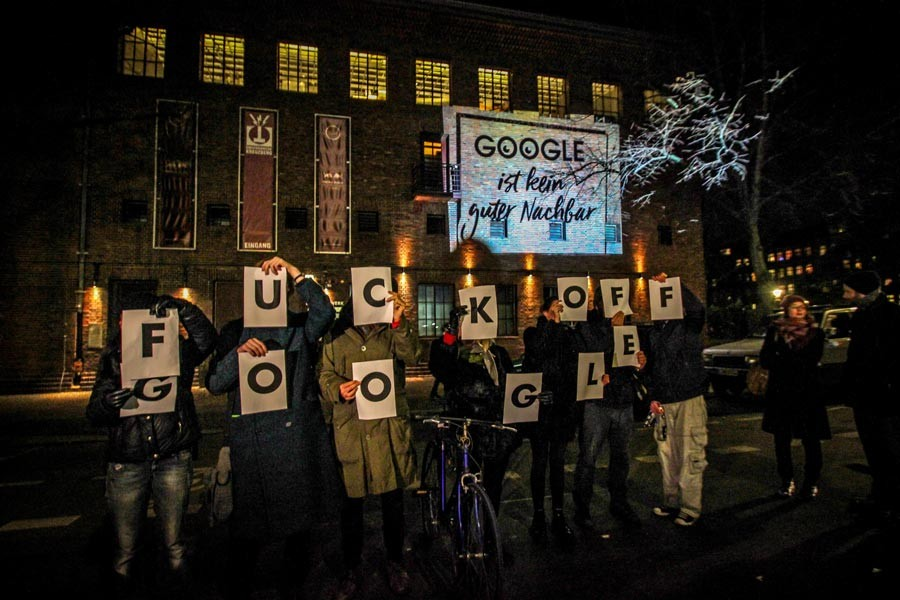 Berlin protesters don't mince words when it comes to their opposition to a planned Google campus in the Kreuzberg neighborhood (Credit: wiki.fuckoffgoogle.de).

Google is opening an entrepreneurship campus in Berlin, and Berliners are not thrilled.

Anti-Google sentiment in the Kreuzberg neighborhood, where the Google space is planned, is rising, the Guardian reports. Graffiti reading “Fuck off Google” and “Google ist kein guter Nachbar” (Google is not a good neighbor) has appeared at local parks, activists are distributing an anti-Google newsletter and an anarchist bookstore is hosting “anti-Google cafe” sessions.

Kreuzberg is a former working-class neighborhood that has become fashionable as of late, with the rising rents and resident displacement that that entails. Rents throughout Berlin — where 85 percent of the population are renters — have increased 70 percent between 2004 and 2016, with Kreuzberg among those areas seeing the steepest rises, the Guardian said. From 2007 to 2016, average rents per square meter almost doubled, going from under 6 euros to just over 10, according to a study by a German real estate firm. Anti-Google protestors in Kreuzberg fear that the tech giant’s presence will only accelerate this trend.

“When Google arrives, many things will happen. They’ll drive out the stores, because the Google employees and the people in the startup sector do not need the ones that are here at the moment,” Stefan Klein, of the neighborhood organization GloReiche, told Political Critique, a European political publication. “And the landlords, the owners, will take advantage of the arrival of workers with more money to implement new plans for high-end stores, expensive housing.…”

Google countered by saying that it is only renting a small part of the Umspannwerk, a former electrical substation that has been converted to offices for other tech companies, and that only 10 employees from Google are moving in. The space it is starting, in fact, is a “Google Campus,” one of seven worldwide, not a corporate office (of which it has more than 70). A Google Campus is more like an event space for startups and entrepreneurs to host meetings or networking sessions. Still, Klein told Political Critique that he believes “there is nothing positive” Google will bring to the neighborhood.

Berlin leadership is eager to bring Google into a city that already has a growing tech scene. In announcing the project last November, Mayor Michael Müller declared that “Today is a good day for Berlin…The Campus Berlin creates a new place for cooperation, creativity and entrepreneurship in our city.”

The anarchists don’t see it that way. At the creatively named website FuckoffGoogle.de, apparently run by the bookshop that hosts the anti-Google meetings, gripes include not just gentrification, but Google’s tax evasion and enabling of mass surveillance.

But ultimately, the fight comes down to how residents view their homes, and how newcomers like Google integrate responsibly—or not. ”For Google…Kreuzberg is just a background,” GloReiche told Vice. “For us, however, it’s our home.”