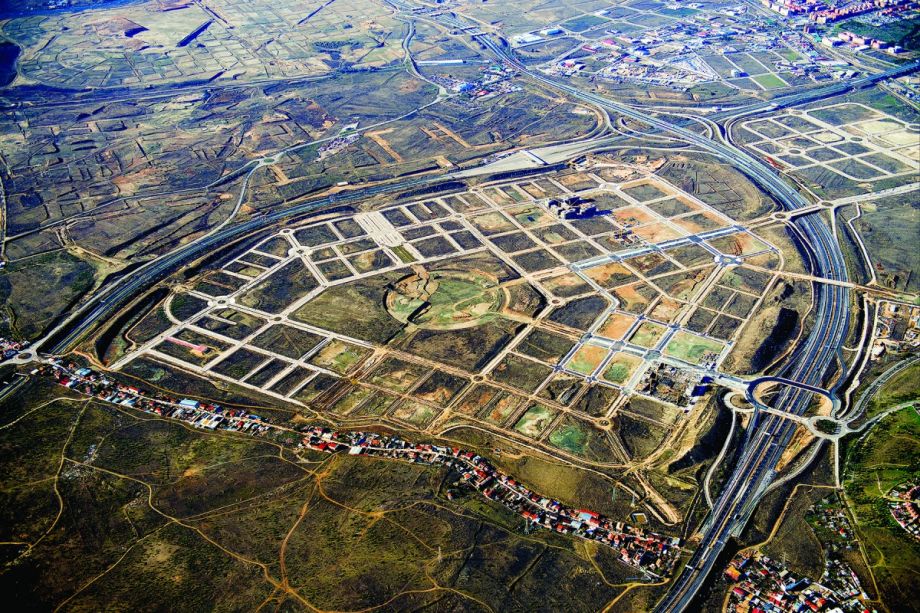 El Cañaveral district, at the eastern edge of Madrid, was one of 13 urban expansions undertaken by the Spanish capital between 1998 and 2006. (Photo by Christopher Marcinkoski)

As we head toward Habitat III, where a supposed New Urban Agenda will be pronounced, we go with plenty of substantive research and media attention being paid to many of the ill effects of rapid global urbanization. These include negative social impacts — gentrification, displacement of rural populations and loss of land tenure — as well as environmental impacts — deforestation and the denuding of arable land, to name just a few. However, when it comes to the most pressing consequence of the increasingly widespread promotion of city-building activities, there’s a less familiar but growing phenomenon rife with a potentially broader set of severe unforeseen consequences: “speculative urbanization.”

As opposed to cities incrementally growing to meet real social or market demands, these speculative urbanization activities — both public and private — rely on aggressive projections for impending economic and demographic expansion, as well as hyperbolically aspirational rhetoric to argue for the manufacture of significant new urban settlement and infrastructures rarely commensurate with the realities of a place.

Under my definition, this phenomenon includes rezoning and redistributing of land for the specific purposes of raising its market value, as well as the speculative construction of housing, infrastructure and urban amenities in anticipation of populations yet to come. The most familiar examples of these speculative activities include exurban new town projects, gated suburban housing compounds, knowledge-industry enclaves, vanity infrastructure projects, and political or economic zones of exception.

While speculative urbanization activities can be found as far back as ancient Rome, these pursuits have increased significantly in scale and frequency over the last two decades. Recent examples include Ireland’s so-called ghost estates, the artificial oases of Dubai and the suburban housing boom in the U.S. Sun Belt. Ongoing examples can be seen at the periphery of China’s second- and third-tier cities, in the massive urban expansions recently being undertaken throughout Turkey, as well as in a similar infrastructure and housing boom in Panama. Urbanization activities seen in Spain between 1998 and 2012 — in particular, in the Madrid region — are perhaps the most dramatic recent examples of the failure of these pursuits.

The recent proliferation of speculative building is indicative of a fundamental shift in the socio-political perception of urbanization activities. Whereas urbanization historically has been understood as the physical response to economic growth and the accumulation of political power, this correlation must now be understood as inverted. Governments today see urbanization as a means to an end — the preferred instrument for generating economic gains (citing predictions rarely achieved) and projecting righteous statements of political influence and competiveness. Demographic and market realities have given way to questionable prognostications that create highly speculative motivations focused almost exclusively on the physical products of urbanization, rather than the appropriate process of urbanizing a particular territory over time. The result is urbanization initiatives with a high propensity for failure — via incompletion, abandonment, inaccessibility or pervasive vacancy — and in turn, the precipitation of both severe long-term and short-term consequences, social and environmental, as well as political and economic.

The phenomenon of speculative urbanization is particularly common in emerging economies, but it also occurs regularly in established economies. In fact, I would argue that urbanization activities have become the ultimate form of 21st-century industrial production, of acute interest and appeal to polities ranging from the most liberal to the autocratically controlled. Given this perceived correlation between urbanization activities and politico-economic status, it is unsurprising to find that just as many of these speculative pursuits were coming to a screeching halt in places like Europe, the Middle East and Asia in the period leading up to and following the 2008 global financial crisis, a new epicenter of speculative building was beginning to emerge across the African continent.

In the 10 or so years since the peak of the global real estate bubble in 2005, population projections, in combination with the extreme deficiency of urban services and settlement seen across the continent, have set off a wave of proposals for new large-scale urban development throughout Africa. Acknowledging the urgent need for upgrades to the continent’s urban settlement and infrastructure, what is of particular interest regarding these proposals is the radical incongruity of their scale, format and program relative to the actual demographic and market demands of the contexts in which they are being proposed, regardless of political or economic circumstances. Ongoing research being conducted at the University of Pennsylvania has found no fewer than 60 cases of territorial-scale speculative urbanization undertaken over the last decade within the 20 largest state economies in Africa.

Many of these proposals promiscuously borrow from dubious models of urbanization-driven economic growth recently employed in places like China and the Middle East. Too often, this appropriation ignores the fundamentally different set of material and demographic resources characterizing the contexts from which they are drawn, as well as the radically different governance and land tenure systems on which they are based. In turn, these proposals for new settlement and infrastructure often threaten to further exacerbate deficient urban conditions by shifting severely limited capital resources away from more basic services.

The particular response to the current state of Africa’s cities vis-à-vis population and economic projections is telling — both in terms of how politicians and investors have approached the situation, and how urban planners and designers have chosen to react. Rather than seeing this as a unique moment in history where the format and organizational logic of the city can be fundamentally rethought and advanced based upon a particular set of extant conditions, much of the urbanization activities that have been proposed or undertaken rely on reproducing watered-down failed experiments of late modernism, and replicating questionable formats of contemporary urbanization that have proven less than successful elsewhere over a relatively recent history. In essence, deficient extant urban formats are being replaced by imported models, which, while newer, are characterized by their own set of fundamental urban deficiencies.

Such uninspired responses should be seen as an indictment of both the promoters of these projects (again, public and private), as well as the urban planning and design disciplines charged with their manufacture. However, neither response should be unsurprising. Any survey of urbanization activities over the last three centuries quickly shows us the recurrent nature of these speculative pursuits, particularly following a period of unrest or recent opening to outside investment in a country. An explanation for the response of planning and design need not reach back so far. As the Dutch urban-historian Michelle Provoost has pointed out:

While big architecture firms are designing entire cities and constructing architectural icons ex nihilo, ‘their’ schools theorize mostly about the inability to plan urbanization, and offer up instead tactics of architectural acupuncture and bottom-up urban politics.

In essence, since the “failures” of post-war modernist planning, the act of designing settlements from scratch — which is now needed to a greater degree than any time in history — has been excised as a core competency of urban design and planning education. In turn, design and planning’s disciplinary capacity to adequately (or appropriately) conceive of and implement new urban form has eroded. As a result, what is most often being peddled as urban design today is simply scaled-up reproductions of “proven” urban formats, or dystopic renderings of new settlement as implausible architectural icons. This disciplinary deficiency, in combination with the generic platitudes that characterize late 20th- and early 21st-century urban planning initiatives laid out by state and global institutions, must be understood as woefully inadequate, and in many cases, actually serve to incentivize the speculative activities I describe.

In Tamansourt, outside of Marrakech, utility connections have been built for plots of market-rate housing as part of Morocco's Ville Nouvelle program. The town plan for more than 150,000 residents will likely never be built. (Photo by Christopher Marcinkoski)

Given these circumstances, what, then, should be the response of those actors involved in these urbanization activities? I offer a handful of broad adjustments that can begin to assuage the consequences of speculative urbanization.

For politicians and promoters, it is essential to recognize the optimism bias inherent in these initiatives, and to accept that these pursuits are more likely than not, going to turn out far differently than originally conceived. These entities must accept this volatility as inevitable, and pursue policies and regulations that can be scaled, adapted, adjusted and revised in real time, rather than embrace rigid conventions destined to break down and fail as demands and pressures inevitably change. Project backers must expand their rhetorical and strategic focus beyond the single preferred outcome, and approach the promotion of urbanization as a manifold process rather than a linear one. At the center of such adjustments is an acceptance that good, successful urbanization takes time. Pursuit of the instant city or quick fix must be understood as a fool’s errand that will inevitably lead to severe unanticipated consequences.

For urban planners and designers, the necessary adjustments are similar. First, the failures of modernist planning and design can no longer be interpreted as a rationale for abdicating the responsibility to advance and innovate when it comes to the creation of new settlement and infrastructure. In this way, urban design and new town planning must not be understood as technocratic endeavors, but as essential cultural projects. Renewed focus on this question should embrace the inherent volatility and risk associated with large-scale urbanization activities as the point of departure for rethinking the production of urban form with a specific focus on the creation of unexpected sources of value — environmental, financial, social and cultural — that can offset or balance against the detrimental volatility of the development process. While the disciplinary tendency is to focus on the physical form of these pursuits, the more critical concern must be understood as revising the processes by which these projects are implemented and occupied. In this way, successful urbanization initiatives will require long-term management over time — not just the one-time production of a fixed plan or design guidelines. Such a fundamental shift in practice will require a retooling of the means, methods and discourse of contemporary urban design and planning so that they are as focused on the processes and volatility of urbanization, as on the formats and physical organization of these pursuits.

Simply put, speculative urbanization is not something that can be designed or legislated away. Rather, it is an essential component of our 21st-century global economic system that demands critical engagement by those actors and institutions directly responsible for the urbanization activities within which this system is fundamentally intertwined.

Christopher Marcinkoski is an Associate Professor of Landscape Architecture and Urban Design at the University of Pennsylvania and author of The City That Never Was (Princeton Architectural Press, 2016). He is a licensed architect and director of PORT|Urbanism. In 2015, he was awarded the Rome Prize in Landscape Architecture from the American Academy in Rome.