Designing a Police Station That Serves the Community – Next City

Designing a Police Station That Serves the Community 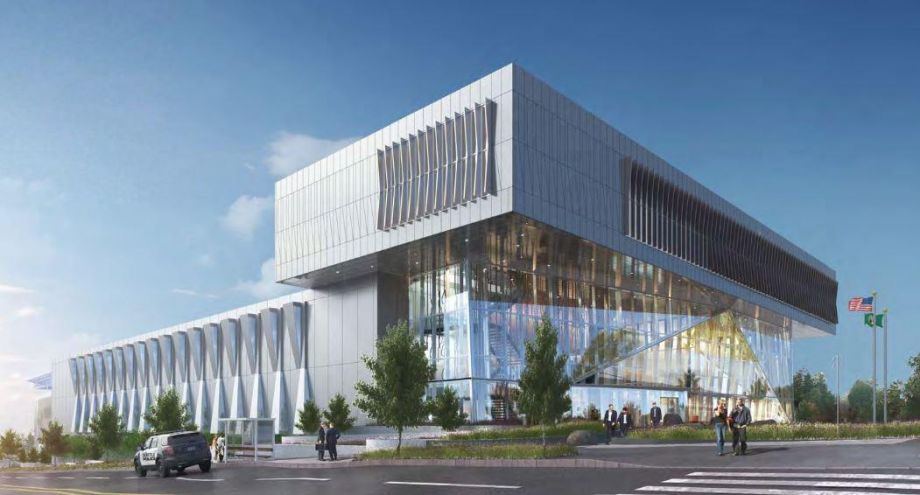 While the nation is engaged in a brutal and heartbreaking conversation about the unequal toll policing extracts from black and brown lives, a Seattle proposal is raising questions about the role of police stations in relating the public and law enforcement. Responding to the need to replace the aging and outgrown North Precinct building, a Seattle Design Commission plan would create a $160 million bulletproof headquarters outfitted with de rigueur rain gardens and cut stone seats, a large glass public lobby and a community room.

But at a public hearing in June, members of the public said they saw the expensive design as part of an aggressive militarization of the police, and a further wedge in a growing divide.

“Police used to stroll their beats and be known by the communities whose charge they held,” said one critic, who went on to echo others who refer to the building as a bunker. “The police should not be armored, nor should they be bunkered like an army. The message is insidious: us versus you.”

Council Member Mike O’Brien says these concerns and others should have been solicited earlier in the process, before a design proposal ever made it this far. The North Precinct, built in 1984, has clearly outgrown its capacity. Nearly 300 employees are working in a building meant for 150. The station’s community room, available to neighborhood groups and organizers to meet with each other or police, has been turned into a locker room to accommodate staff. Still, O’Brien wants to know how seriously alternatives were considered that might have kept costs lower, like repairing the old building and constructing a second, smaller one. And he questions the level to which the public and city council were engaged.

Andy Ishizaki, senior project manager for the building, says community feedback was largely positive at the four open houses held by the department of capital development and construction management during design. “For me at least the commentary about being a bunker and being unfriendly, that was a surprise to me,” he says.

O’Brien feels it shouldn’t have been. The North Precinct Advisory Council, a citizens’ group engaged in improving public safety, was very involved in the process, but “that’s not a group that’s broadly representative of the broader spectrum of criminal justice and how policing works in Seattle,” says O’Brien. For one thing, they’re largely older, white homeowners, a group that sees the police as a body to protect them and their property. That’s a far cry from the experience of many who are black, brown or poor.

The Seattle Black Book Club has organized several events to discuss the headquarters proposal, and brought residents to comment at a city council meeting. They declined to be interviewed for this article, but offered that the idea that a police station could be a community space “clashes with our antiracist ideologies. … It is incorrect [to] assume that they are open and inclusive of their communities. This is not a narrative that we foster.”

So what about all those public amenities? The plan includes a large public plaza; one corner of the lot is dedicated to a parklet with “skatable” walls. Ishizaki says other police precincts in Seattle have seen people use lobbies of police stations as safe places to conduct Craigslist exchanges, or child/parent custody exchanges. Ifeoma Ebo, an urban designer at New York City’s Department of Design and Construction (DDC), says police stations serve as the face of law enforcement in their communities, “a symbolic representation of what the department represents.” When citizens trust their police, the station can be a place not only to be booked for crimes, but to report crimes, to register a bicycle, to attend a neighborhood meeting.

“It is a place to gain community services that are beyond the typical thoughts of what a police station is for, or what the responsibilities of a police officer are,” she says. “If that facility does not appear welcoming or feel inviting, then people do not have that outlet to report crimes, and therefore cannot participate in this act of crime prevention in their neighborhood, and are therefore not empowered to be a part of the solution.” At the same time, she cautions, “Design is not the answer to all of the world’s problems. If there’s a desire to transform the face of their facilities, then there needs to be an authentic transformation within the institution itself.”

Ebo works at a new unit of the DDC that creates design policy for New York’s public buildings. In March, the group published Design and Construction Excellence 2.0, a set of guidelines provided to the designers and architects who create New York’s civic spaces, from libraries to sanitation buildings to police stations. The guidelines are built on four pillars: equity, sustainability, healthy living and resilience. Ebo’s focus is on defining equity, which she says in the context of the portfolio boils down to access. Does everyone feel welcome and capable of accessing services? Can people with physical or visual impairments or language barriers navigate the space? A public building should feel like a resource to its community, creating access to economic and social empowerment. It should respond to the cultural history and unique characteristics of the neighborhood it’s situated in.

Ebo points to two police station designs that seem to do this well: the Hollenbeck Replacement Police Station in Los Angeles, and the new 40th Precinct in the Bronx, which is still in the design phase. The latter has a community room with direct access to the lieutenant’s office. The former, in L.A., is similar to the Seattle proposal. It has a large, transparent lobby, and a layout that separates the area where alleged criminals are processed from the front of the station. Ebo says it can be a traumatic experience for someone who comes to a precinct to report domestic violence to enter a building in plain view of jail cells. The flow through the space from the front door to the waiting room to the room where a person will report a crime “really says a lot about how that police station operates, how willing they are to serve the community. So really it should be one of the most important spaces, in the context of what is happening today,” says Ebo.

In that context, police officers also need to feel safe, and Ebo and Ishizaki both stress the importance of finding a balance between making the public feel welcome and keeping the building secure. The proposed Seattle design is bulletproof — though not bombproof, as some have charged — and designed to withstand major earthquakes.

O’Brien is still hopeful there’s a way to come up with a plan that will meet law enforcement’s needs, while improving public trust, and cut some of the cost — without wasting the money already spent on design.

“I don’t want to build a $160 million building that’s a throwback to the old way we used to police, when there might be a new way of policing and we want to build for that,” he says. He’s suggested minor changes, like reducing the size of a parking garage, and larger ones, like splitting the building into two.

The North Precinct is Seattle’s largest, encompassing 43 percent of the city’s population. Dove Alberg, director of the department of capital development and construction management, says renovating the old building and erecting a second one was considered, but deemed infeasible because the current space would need to be temporarily vacated, requiring a makeshift facility or vastly delaying renovation while the addition was constructed. She also says splitting the precinct into two buildings would require doubling up on administrative personnel, and thus raise costs. The current design allows for two separate precincts to operate in one building.

But O’Brien says other questions still need to be asked in the public realm, like whether satellite precincts could produce better policing. He also wants to hear from more residents, to find out if the basic premise holds up: Can community healing happen at the police station? Maybe teenagers would go to the precinct to skate, or maybe they’d prefer to have more casual interactions with police around the city. A design proposal for improved policing created by the Chicago-based Studio Gang utilized a similarly decentralized model. They propose that police should live in the neighborhoods they serve and that the police station should be a public space, but they also advocate for a separate community meeting building, offsite athletic facilities shared by public and police, and an “innovation hub” for police training and community education — all with the goal of increasing casual interactions.

In Seattle, O’Brien says, “I think there’s just a layer of questions and engagement that hasn’t happened yet.”

One of those questions: What would it cost to rethink this? The city has already allocated $20 million to the project, some of which will go toward land acquisition. O’Brien compares discontent about the cost of the precinct to a debate raging around a new youth jail King County wants to build in Seattle. A jail and a police precinct aren’t the same thing, but O’Brien says he understands why residents would look at both and question why their elected officials are telling them the city and county can’t afford to build enough affordable housing, or to improve education, but they can spend hundreds of millions of dollars to police and imprison.

A final budget for the Seattle proposal will be presented this fall, and the council will have a chance to pick it apart before deciding whether or not to approve it in November.