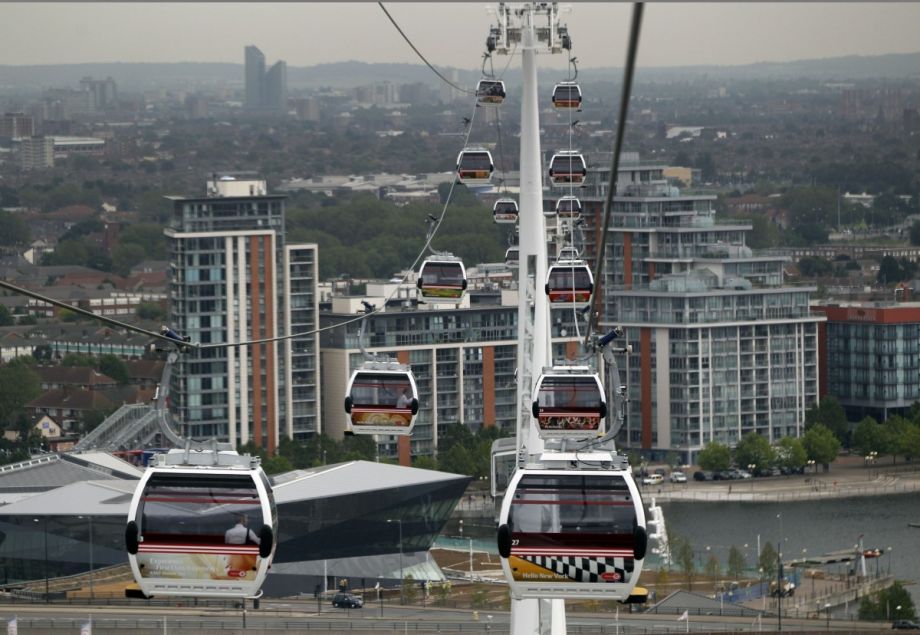 Last week, a New York real estate developer proposed what he says is an innovative transit solution for the city: a gondola connecting Brooklyn to Manhattan. The first phase of the imagined East River Skyway, advanced by Dan Levy of CityRealty, would shuttle passengers from the trendy waterfront of Williamsburg to lower Manhattan.

Levy, who says he got the gondola idea when he was on a ski trip, says that it would be a way to move as many as 5,000 people an hour from the booming Brooklyn neighborhoods along the East River into Manhattan at a relatively low capital cost (compared to building more subways, at least), which he estimates at between $75 million and $125 million. The plan has a glossy website with cool graphics, and claims that it would be the solution to the overstuffed L train, which at one station has seen ridership go up by more than 50 percent since 2007.

Where would the $125 million come from? Levy says that’s not clear yet. “There’s a bit of a spectrum on how financing would come together, from entirely private to entirely public,” he says, although he says that things would likely skew heavily toward the private end of that spectrum. That could mean advertising or other sponsorship options, Levy says. He also says he believes that the system could be “fairly self-sufficient” in terms of its operating costs.

The idea — it’s hardly formed enough to call it a plan — got a spate of starry-eyed coverage when it was announced. “With newly proposed sky gondola, you could get from Brooklyn to Manhattan in less than four minutes,” said the headline in the Daily News. Wired referred to it as “The Totally Serious Plan to Connect Brooklyn and Manhattan by Gondola.”

Levy, however, is short on details. In a phone interview last week, he said that specifics such as the location of the proposed stations have yet to be firmed up, although he doesn’t predict any use of eminent domain or “significant” displacement. “The sites we’re looking at are either empty or already slated for development,” he says. He concedes that “each one of those options has a lot of complications,” but for anyone who has built anything in New York, that’s just part of doing business.

He also is fuzzy on issues of governance. Would the gondola fall under the purview of the financially strapped Metropolitan Transportation Authority? The New York City Department of Transportation? Would it have its own operating authority? Levy says he doesn’t know.

The gondola may end up in the city’s already long list of unrealized idealistic infrastructure. Or it may, as Levy envisions, be shuttling passengers across the river as soon as three years from now. After all, the city’s subways began as private-public partnerships. Ferries and bike-share offer examples (with varying degrees of success) of private entities partnering with the municipality to supplement the transit system. And when the Roosevelt Island Tram was built, connecting the Upper East Side of Manhattan to the residential developments in the middle of the river, it was meant to be a temporary stopgap nearly 40 years later, with subway service now available to the island, it remains a popular commuter option.

The flurry of excitement over the gondola and handwringing over jam-packed L trains, however, are just a brief distraction from a much more serious and persistent problem in New York: the chronically underfunded transit system. This is the American city with the fewest drivers, with only about 46 percent of residents owning their own car (that rate has, admittedly, been ticking up). On an average weekday, nearly 5.5 million people ride the subway and more than two million ride the bus.

And yet the city still struggles with funding the transit system that keeps it alive, and the people who suffer most are not the affluent residents of the condo developments on the Williamsburg waterfront. They are the millions of New Yorkers who live farther out in neighborhoods like the Rockaways and Canarsie, where semi-affordable housing can still be found. They are dependent on intermittent, often unreliable subway service, or on a bus system that was slashed in the wake of the recession.

These are the people who undergird the New York economy, who make the city run. But the MTA’s lack of secure funding sources and its perennially overstressed coffers all too often leave these riders quite literally out in the cold, facing ever-higher fares for reduced service. The Bloomberg-era congestion-pricing plan would have channeled revenues from drivers entering the central business district into transit, building a more secure financial foundation. But it failed to win approval in the state legislature in 2008, in part because it was seen as out of touch with populist concerns about fairness.

Now transportation consultant Sam Schwartz has come up with a plan, MOVE NY, to reform the city’s bridge tolling system and thereby to secure a reliable source of funding for the city’s vital public transportation network, as well as for the maintenance of its bridges. Schwartz’s plan also has a detailed response to the transit needs of New Yorkers in all five boroughs. It is currently making its way through the process of building public support, and while there are still many naysayers, it seems to have more backing so far than congestion pricing did.

New York’s transit system is under enormous strain. While a gondola might capture the imagination of the media and relieve the pressure on a select few who live in an affluent part of town, it also reinforces the image of the city as a playground, or even a plaything, for the wealthy few. The millions of New Yorkers who ride its transit system every day need a far more ambitious — if less superficially glamorous — solution.