We Have Entered the Bike-Sharing Era – Next City

We Have Entered the Bike-Sharing Era 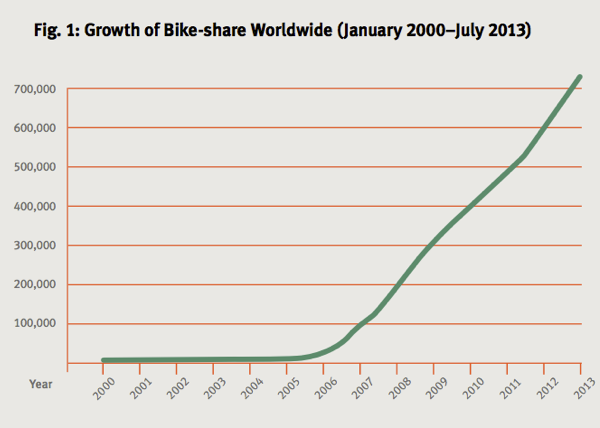 If bike-sharing programs, wherein public bicycles are available to be affordably rented for a quick ride across town, seem to you to have reached a level of cultural ubiquity in just the last few years, consider yourself an astute observer of urban trends.

The chart tracks the global increase in bike-share bikes from 2000 to 2013. Until 2006, the total was a flat line, but it then spiked sharply skyward. By the end of this past year, there were more than 700,000 bikes being formally shared through city bike-share programs worldwide.

As simply a point of reference, that’s about 34 bike-share bikes available for every Starbucks store in the world.

The trigger, suggests ITDP, was Paris’s bike-share program, launched in 2001. Paris mayor Bertrand Delanoë had spearheaded the creation of hundreds of kilometers of new bike lanes, but they were being lightly used. The city studied to find out why: “[M]ost apartments were too small to store a bicycle, and people did not feel safe parking their bikes on the street overnight.”

Paris’s Vélib program — and its accompanying technology-enabled features that made it newly easy to track bikes and handle payment — was born, providing a model that other cities have tried and reworked as their own.

The Bike Share Planning Guide also features another neat chart, this one a matrix showing which bike-share systems are used the most, as measured by both the rate of participating residents and the frequency of trips. 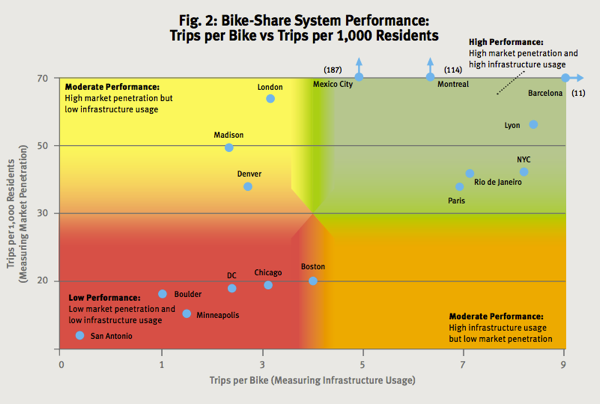 The rest of the guide is here.