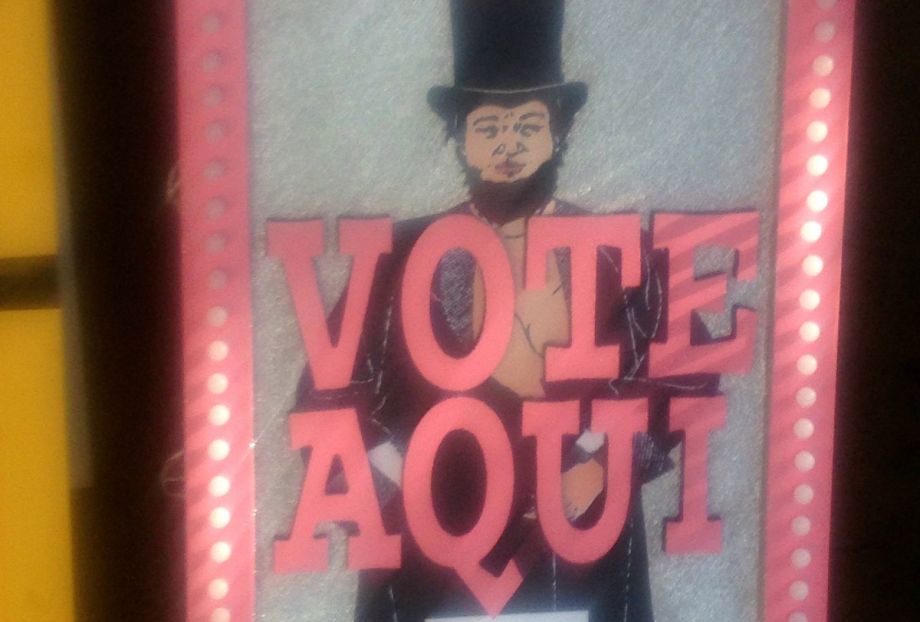 Voting is a big deal. Or it used to be. Back in the day, parades, bonfires and other public events got people excited about exercising their right to vote, and heated post-election arguments at many a neighborhood bar kept them excited afterward.

Now, voting may still be important, but too many U.S. citizens couldn’t care less about it. Or they might care if it weren’t such a chore. Even if people don’t move, their polling stations do; sometimes, it’s just hard to find the entrance to a polling place. The secret ballot has turned into a near-total code of silence that keeps voters from discussing their choices, assuming they made them, after everything’s over.

That’s certainly the case in Philadelphia, where both voters and polling places move from election to election, and the only signs required to mark the entrance make voting seem like not only a chore, but a bore. Not even a vacancy in the mayor’s office is likely to bring turnout above 25 percent of registered voters at next week’s city general election (November 3rd). Apathy is so great that one local citizens advocacy group has offered a $10,000 prize to bring people to the ballot.

Cold, hard cash aside, however, a civic idealist and a celebrated curator of street art have also joined forces in an experiment that seeks to answer the question: What would happen if we made voting look like fun?

Next Stop Democracy aims to inject some color and life into the voting process in Philadelphia by placing vivid “Vote Here” signs created by 60 local street artists outside the entrances to selected polling stations citywide on Election Day. In addition, there will be pop-up musical performances at several local polling places to add even more life to casting one’s vote.

The project is the brainchild of Lansie Sylvia, director of engagement at Here’s My Chance, a Philadelphia marketing and branding agency that works exclusively with nonprofit organizations working for the greater good.

Her inspiration came from a combination of experience and historical knowledge. “I’ve lived at six different addresses since moving here eight years ago,” she says. “Every single time I’ve had a different polling place, and every single time I had a hard time finding it.”

This got Sylvia to thinking: If someone like her who wants to vote finds herself feeling discouraged from doing so, surely there were others like her out there. So she and her colleagues at Here’s My Chance started asking around with an eye on changing this situation.

“There’s a lot of work going into getting people to the polling place,” she says. “Something we unveiled in our quantitative research was that people felt intimidated at the polls. People didn’t feel welcomed at the polls.”

Some of the unease may come from the atmosphere on the inside, but if voters can’t find the entrance, that doesn’t matter: “It’s hard to change the internal structure of the polling place, but it’s easy to change the outside,” says Sylvia. “What if you took the same laws that allow the partisan stuff and made it about the non-partisan stuff — bringing in some of the celebration?”

In other words, some sort of enticement that says, “Come in, we’re expecting you.” She turned to street art for the answer.

It’s a fitting medium for the task, what with its roots in graffiti, a sometimes frowned-upon form of artistic expression that began with its practitioners advertising their existence in the form of “tags.” Contemporary street art builds on that impulse by taking abandoned or otherwise unclaimed space and drawing one’s attention to it through sending a message or offering visual commentary.

Once Sylvia knew the message and the medium, she knew who could connect the two: Philly native Conrad Benner, whose widely read blog Streets Dept showcases and celebrates street art.

“The thing I love about street art is how inviting it is,” he says. “It meets you where you are, and it doesn’t put up these walls that the museums and art galleries do.” Nor does it require the viewer to possess specialized knowledge to appreciate and extract meaning from it, he adds.

As it turned out, Benner was looking for ways to mobilize both his followers and the community of street artists in service of a worthwhile cause. Over the five years since Benner launched Streets Dept in 2011, he has gained a sizable following: 140,000 followers on Instagram, 7,000 on Twitter and tens of thousands of pageviews each month on the blog. On top of that, he has professional experience in social media, having served as director of social media for Quaker City Mercantile, a Philadelphia-based brand management and marketing firm.

“As my influence grew over the years, I made a conscious effort to think about, I have a voice, I have eyes on me, is there something more powerful I can do to lend my support to issues I believe in?” he says.

With Benner (who says he has voted in every election since he turned 18) on board, Here’s My Chance put together a proposal for the Next Stop Democracy experiment. The Knight Foundation selected it as one of 32 winners to get funding in its inaugural Knight Cities Challenge. (Knight has provided funding support to Next City.)

Benner’s main role is community catalyst. He got 60 local street artists, including participants in a Mural Arts Program skills-training workshop for disadvantaged youth, to create colorful sawhorse signs with the message “Vote Here” in English and Spanish. The signs vary from earnest to whimsical in tone. At least one draws on advertising iconography, while several others draw on and even poke fun at local (the cheesesteak) and national (Abe Lincoln) symbols.

Some of the participating artists are themselves recognizable. There’s Isaiah Zagar of the whimsical mosaics and Philadelphia’s Magic Gardens Kid Hazo, who produces humorous offbeat versions of common signs (his effort here is derived from “Wet Floor” signs); Ishknits (Jessie Hemmons), the “yarnbomber” who gained local notoriety when she knitted a bikini for a statue of former Mayor Frank Rizzo; and many more equally provocative and inventive artists and designers.

Students at the University of Pennsylvania will collect and analyze data on turnout at the 60 polling places where signs will be placed on November 3rd. The locations have been chosen to produce a valid statistical cross-section of the city’s 850 polling places.

In addition to the data, the project team is also documenting their actions in detail. “We wanted to create these really beautiful breadcrumbs so that if someone else in another city wanted to try this, they’d have a record of what we did,” Sylvia says. People in Baltimore and Detroit have already contacted Here’s My Chance about doing something similar in their cities.

“If we can succeed in making [the polling place] feel like a place of, ‘I deserve to be here, I’m welcome to be here, and what I say matters,’ then it will be a game changer for the city,” Sylvia says.

Next Stop Democracy hopes to reverse a troubling trend. Even as the information revolution has made finding out where to vote easier, turnout continues to fall. In the May 2015 Philadelphia city primary, only 27 percent of registered voters came out to choose the candidates that would face each other as the Democratic and Republican standard-bearers next week.

Sylvia allows that Philadelphia’s political culture doesn’t help matters any. “You have this residual ‘blech’ factor. It just feels corrupt,” she says. But in her view, increasing participation gets rid of some of the stench: “The more people you bring into the process, the more egalitarian it becomes.”