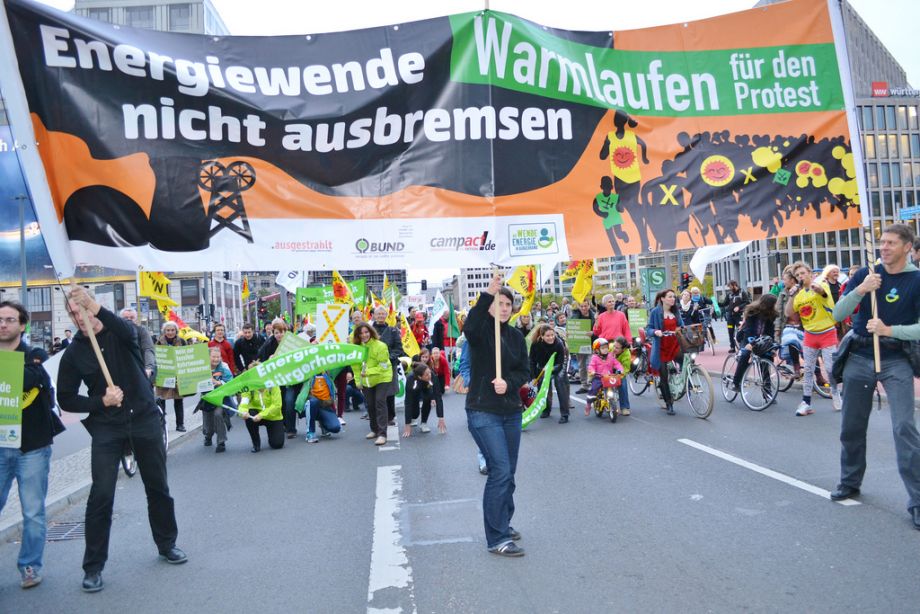 Germans take their clean energy very seriously. The “Energiewende,” as its known – literally “energy transition,” but the word “Wende” calls to mind the German word for the fall of the Berlin Wall and the reintegration of East Germany into the democratic, capitalist West – has already turned the country into the world’s largest installer of solar panels. The government has also set a goal of reducing greenhouse gas emissions by 80 to 95 percent of 1990 levels by the year 2050, in order to fulfill a global reduction by 50 percent (the difference takes into account the necessary growth of emissions in the developing world.

To that end, Germany’s Federal Environmental Agency has released a report outlining the practical steps that it could take to reach the more ambitious end of that goal.

“The following scenario,” starts of the paper – whose press releases announces it with the oh-so-German title, “A greenhouse gas-neutral Germany is (almost) possible” – “describes the possibility of a greenhouse gas-neutral Germany in 2050, but does not make any predictions about the probability of such a development. It is not a forecast. We demonstrate that, in principle, it is possible for Germany to lower its greenhouse emissions by 95% compared to 1990 by 2050.” The study assumes that “Germany will still be a highly developed industrial country that has maintained its standard of living,” although it also takes as a given that the national population will fall to 72.2 million, nearly 10 million less than the current 81.9 million people who live in Germany.

All kinds of emissions must obviously be dramatically cut back in the plan, but energy sees perhaps the most dramatic change – from just over 1 billion metric tons of carbon dioxide emissions in 1990, to virtually none in 2050. There would be no nuclear power or crops grown for biomass; instead, wind and solar panels provide the bulk of Germany’s energy, with “a smaller proportion” coming from hydropower and geothermal installations.

Total energy consumption is cut in half through efficiencies, with private households seeing dramatic cuts, while industrial and commercial users decrease their consumption by at least 50 percent.

In the transportation sector, vague “traffic avoidance” gets equal billing with mode shifts towards rail, buses, walking and biking and efficiency improvements. The study also assumes that so-called power-generated fuels are a mature technology – in other words, fuel that can be produced from electricity, which is in turn generated from renewable sources.

Reducing industrial emissions comes largely from changes in energy generation, but it also assumes that some polluting industrial processes are curtailed (“basic oxygen steelmaking no longer takes place and directly reduced iron will have been massively expanded”). The cement industry is left as the larger emitter (7 million metric tons of carbon dioxide), followed by lime (3.5 million tons) and glass (just under 1 million) producers.

Waste and wastewater emissions reductions have largely already actually taken place – carbon emissions from landfills, for example, have dropped from 38 million metric tons in 1990 to just 9 million in 2010, with further declines planned.

Agriculture is perhaps the hardest sector to make greener, with a relatively modest reduction in emissions by just 50 percent. The study’s authors assume that Germans will eat less meat, mainly for health reasons – “the only way agricultural emissions could be reduced to satisfactory levels.”

The full study includes much more detail, as well as an analysis of how forestry and land use change will impact emissions. At just 29 pages, the report is readable by laymen and can be downloaded for free as a PDF.