Georgia May Free Fuel Taxes For Use on Transit Projects 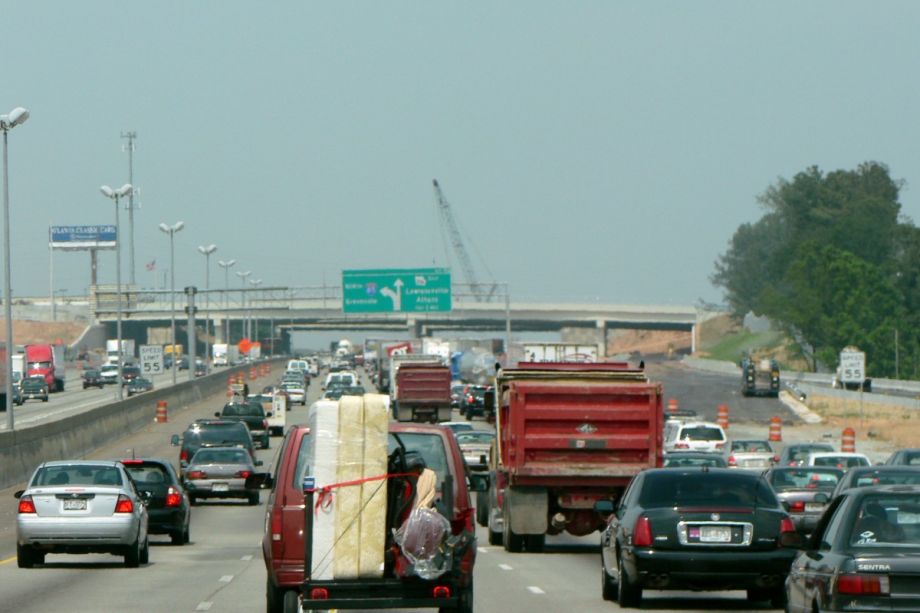 One reason cities like Atlanta are drowning in asphalt is because their state constitutions require that they do. In the 1920s, as the U.S.-numbered highway system was being developed, its backers in state highway departments across the country proposed using taxes on motor fuels to pay for the roads — and to make sure the taxes would pay for them, the highwaymen pushed state legislatures to add clauses to their constitutions prohibiting the use of gas taxes on anything other than road construction or maintenance.

The country was far less urban then than it is now, and a restriction that may have made sense then no longer does now in an urban society where roads are proving increasingly inadequate as a means for moving large numbers of people around metropolitan areas. Streetsblog USA pointed out last fall that one reason potential game-changers like the Atlanta Beltline may take far longer to build than they should is because the state doesn’t chip in for their construction. Fears of racial integration, the article said, explain some of the reluctance, but a bigger reason is a state constitutional restriction on how gas taxes may be spent.

Now Streetsblog reports that a Georgia state senator has taken a first step towards removing that barrier. State Sen. Sally Harrell, who represents a suburban Atlanta district, introduced a bill on Jan. 30 that would amend the state constitution to allow gas taxes to be spent on “public transportation” as well as “public roads and bridges.”

The spark that lit the fuse towards blasting the road restriction out of the state constitution, Reporter Newspapers reports, was a controversial Georgia Department of Transportation proposal to spend $11 billion to add toll lanes to the northern leg of the Perimeter Highway (I-285) and State Route 400, a major commuter route into Atlanta from the northern suburbs, from the Perimeter Highway north to Alpharetta.

While the project includes facilities for MARTA bus rapid transit, Harrell told Streetsblog that she and her constituents still see it as the wrong solution for the problem of traffic congestion along the Route 400 corridor. “I kept hearing from constituents that they don’t want these lanes — that they are a multi-billion dollar band-aid for Atlanta’s traffic problems, and everyone knows that they won’t work long term,” Harrell said. “Then I realized that we are getting [them] because that’s all [the Georgia Department of Transportation] has to offer. … We keep building roads, and cars keep coming. Now we are literally choking and it has affected our quality of life. Young people, who do not like to be dependent on cars, are going to stop coming to Atlanta.”

Should the bill become law, and should the constitution be amended, it could significantly speed up construction on the 22-mile Beltline, which at its current pace would not be completed until 2050. By contrast, the toll-lane project on I-285 and Route 400 would wrap up a mere 12 years from now.

The move was actually a baby step, and it doesn’t commit the city to spend a dime on anything, but Clearwater City Council in Florida just told a company that wants to establish a beachhead for a new form of aerial-tram urban transit in the U.S. that it would love to see a system launch there.

Florida Politics reports that the council voted 4-1 on Feb. 6 to support a plan by BeachTran LLC, a Clearwater-based company, to develop a system of aerial gondola cars for moving people about the city, and potentially the entire Tampa Bay area. The company is working with a California-based company called SkyTran to develop a new type of aerial tramway.

Clearwater City Council member Bob Cundiff waxed enthusiastic about the project: “This would be the first commercial test of what could be a regional system of transportation, possibly taking one-third of the cars off the road,” he told Florida Politics. “It’s an elevated system using solar power and magnetic levitation for propulsion.”

The SkyTran system being developed is a form of “personal rapid transit” that would consist of four-passenger pods suspended from monorails. The company says the cars would have top speeds of 100 miles per hour and that the system can carry more people than a six-lane highway.

Cundiff stressed that his bill does not commit the city to support the project financially, at least not yet. But he described it as laying the groundwork for the construction of an actual system when SkyTran and BeachTran are ready to proceed. The latter company envisions a first-phase system that would connect various destinations in Clearwater, with extensions into Tampa and St. Petersburg in a second phase.

Public transit riders everywhere know that negotiating the buses and trains can be a challenge. But who knew that it could be an entertaining board game?

The owner and art director of Chicago’s Transit Tees were caught by surprise when their creation proved to be just that. A WTTW news report on the rise of board games in Chicago focused most of its attention on the company’s new game, “El: The Chicago Transit Adventure.”

The first 2,000 copies of the game, introduced late last year, sold out in weeks. A second run of 2,000 copies sold out just as quickly. The game’s developers had to rent a second storefront next to their Wicker Park store just to handle orders for the game over the holidays, and as of now, 100 copies are on backorder pending the arrival of a fresh supply this month.

The goal of the game: To visit random destinations in Chicago and make it back to State/Lake station before your rivals using the city’s ‘L’ lines and buses. Players can encounter detours or sleep through their bus stops in the course of their journey, or their trip may be slowed by Cubs fans boarding all at once. They might encounter stations their rivals have closed for construction, and if they’re caught short on fares to bypass them, oops!

Transit Tees owner Tim Gillengarten and art director Tom LaPlante worked with the CTA to come up with realistic, but not too racy, obstacles for players to surmount. “The CTA asks us not to put in anything disparaging,” Gillengerten told WTTW. “There’s a lot of funny adult things that happen that we had to leave out. We’ve talked about using those in an after-hours version.”

Tabletop nerds give the game moderately good ratings (6.6 out of 10 on the Board Game Geek site as of this writing). But what has pleased the creators most is that Chicagoans who have bought the game and played it tell them it has created a sense of community.

Which should only be expected, because after all, when our bus is stuck in traffic, we really are all in this together.