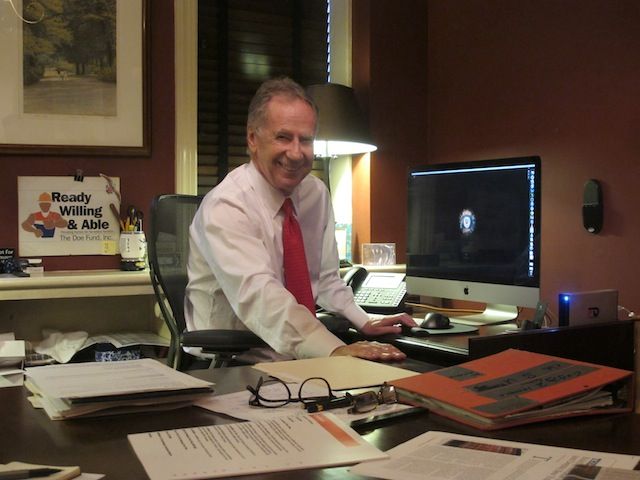 McDonald, as the lore goes, started feeding homeless people in Grand Central Terminal in 1985. It lasted 700 consecutive nights. The Doe Fund’s flagship program — called Ready, Willing & Able, and whose stickers are plastered all over the city — takes in the homeless, incarcerated and drug-addicted denizens of New York and gives them a chance to cycle back into the workforce by offering transitional work, housing and a job skills training program. The program pays its trainees a living wage for work, like cleaning the streets and pest control, in the hope that it prepares them to become taxpaying members of society.

I went to McDonald’s Upper East Side office not to talk about the Doe Fund, though we did, but to talk about what he might do to strengthen the urban core if elected mayor. The Doe Fund’s offices take up the top floors of his house. McDonald — who had taken up painting before his mayoral bid and has one of his large, abstract paintings hanging in his office — was a Democrat for 45 years but switched parties to run for the Republican nomination, where there’s less traffic and noise. He feels there’s a shot.

But most people don’t know him, so his campaign hopes to get New York Republicans excited about the work of the Doe Fund — jobs! Breaking the cycle of recidivism! — and somehow win 40 percent of the primary for the nomination.

McDonald has the likability and relatability of Joe Biden. He’s funny, a little crass and damn proud of how far he’s come. When he talks about changing the plight of black men in U.S. cities, his voice rises and he sounds like Rex, the excitable tyrannosaurus rex voiced by Wallace Shawn in Toy Story. He might rub people the wrong way with his unsparing and direct message, but you can’t deny the man’s moxie.

Next City: So why politics now?

George McDonald: Because I actually believe in the potential of the people. I have hope that we can get out of the circumstances that we’re in now to form that more perfect city. Because a job is the last frontier of public safety. I want to take the experience that I have dealing with some people and bring it to all of the people in our city.

My focus on creating employment opportunities for people at the bottom and having them be able to move up that economic ladder will help all New Yorkers. It helps middle-class people. We spend $1 billion each year just on homelessness. So imagine when we start transitioning those folks — like we do at Ready, Willing & Able — into taxpaying members of society. They become not a tax burden, but creators of revenue to sustain the services that the middle class is depending on.

NC: President Obama has been on this push for the middle-out economy. That seems to be what you’re talking about. A stronger middle class is better for New York?

McDonald: There’s no doubt that we need a stronger middle class. But I’m suggesting we move the people from the bottom up into the middle class and create this larger middle class that we’re looking for. The existing middle class people get relief by doing that, because these folks at the bottom are no longer a tax burden to them.

NC: How exactly is that done?

McDonald: Now I’ve proposed using the purchasing power of the city of New York, because while the president may talk about it, the things that are going to create the jobs are done at a local level. Procurement is a big issue going forward, and the example that I use is that the department of education buys applesauce from China.

Parenthetically, you should know that the city of New York is the second largest purveyor of food behind the United States military in our country. And we’re buying our applesauce from China. We can buy our apples from New York State and have a manufacturing facility in the Bronx. And what happens when you do that? You may pay a little more for the applesauce, but you are spreading that little more around in the local community in the form of wages that get spent at the deli, for rent, for clothes, for all kinds of ancillary things that we all need to live. Instead of having that same dollar be in China and supporting their local economy. It’s a rational choice that we have to make going forward.

NC: The MTA just made some strides for smarter procurement. They awarded a $165 million contract to a company upstate. And in February LA Metro commissioned a new fleet of buses and had an American jobs clause in the contract with their Canadian manufacturer.

McDonald: I would take it one step further and say I want the plant in the Bronx. Or South Brooklyn. Wherever it is, we can do it in the city to the extent that we are able. And I’ve been talking about that from the beginning of the campaign. That’s a big area of potential future employment and revenue for the city.

NC: So you’re saying that local procurement might lead to more living-wage jobs and some equity at the neighborhood level?

McDonald: That’s what we’ve been doing at the Doe Fund for these 20 some odd years. It’s all about economic mobility.

NC: You’d like to apply the Ready, Willing and Able model more broadly to New York City, then?

McDonald: I want to create residential schools for disaffected workers who are homeless and people coming home from prison who need a place to live but also need to get trained. Because the hardest thing in job training is, how do I live while I’m getting trained? You want to go, say, get a master’s degree. But how am I going to eat? How am I going to pay rent? How am I going to do any of this stuff?

McDonald: You just read my mind. We’re going to try to do this with the state dormitory authority. And I’m going to do this whether I’m mayor or not. Most of the people I’m talking about are folks who come home from prison. It’s a state responsibility. It becomes a city responsibility when the person shows up in your jurisdiction.

NC: Do you have any other plans for affordable housing that doesn’t involve job training up your sleeve?

McDonald: We’re calling for the creation of 75,000 efficiency apartments. In the last century they’d be known as SROs. But they all had one thing in common — they were built by the for-profit industry, and then they were torn down and replaced with these new condominiums and co-ops and market rate stuff, which is good for the city and the tax base.

But it’s bad when you don’t replace the first rung on the housing ladder. Everything gets out of balance. You wind up with single individuals living in four-bedroom apartments because the apartments are so dear. They’re not going to give them up. And that leads to a whole discussion of rent control and rent regulation and whether or not it, in fact, help affordability. And there’s a school of thought that says it doesn’t.

NC: Would they be large projects like we’re used to, or smaller scale buildings?

McDonald: Both. It’s the concept first. I need zoning changes because they’re 275 square feet. I built this building on 117th Street between Second and Third avenues. It’s under the zoning of not-for-profit with sleeping accommodations. I want to take that model and make it available for for-profit development.

Because here’s the deal. We created this zoning model in the city of New York for not-for-profits. So it means that I can construct a building as a not-for-profit that’s called supportive housing. It’s for the chronically mental ill, people living with HIV/aids, the old and infirm, elderly folks — people with special needs. And we have now as a city and a state developed tens of thousands of these through three different agreements. But it doesn’t exist in the private sector. You can’t build it for just plain working poor people. Except the building that I built on 117th street, which I slipped in when they weren’t looking, basically. And it’s for working poor people.

NC: Is that part of the lottery for affordable housing?

After that I would look at these 421g conversions, because the 421g program is a tax incentive program that allowed developers to take commercial loft buildings downtown and convert them into residential housing after 9/11. Why not do that where there are loft buildings all over the city to create more affordable housing? Especially in Crown Heights and those areas where they’re looking for affordable housing for large families.

NC: You’ve worked a lot with regular New Yorkers on everything from affordable housing to job creation. How can your experience with the Doe Fund translate to City Hall?

McDonald: My experience is perfect for an executive position like mayor. I don’t know that I would be so good in the United States Senate or the House, standing around debating issues. I would want to be able to do something about them. When you look at what we’ve done at the Doe Fund, I started with less than nothing and only used the human capital that was available to us and said, “follow me if you want to do this, this can be the outcome.”

So you give up drugs. You get up every day and work hard and take directions from others and then eventually we’re going to help you get a job in the private sector, a place to live. You’re going to be independent, taxpaying members of society. Tens of thousands of people later, we’ve done exactly that. Since I walked into Grand Central Terminal and started talking to people about joining the Doe Fund, we have actually generated $750 million in revenue.

If you want to know what somebody’s future conduct is going to be, it’s pretty well set that if you look at their past conduct you can determine what they’re going to do in the future. Anthony Weiner would be a good example of that. You take a look at what he’s done in the past. Hey! He’s still doing it. I’ve created opportunity for people from the very beginning and that’s what I would do as mayor.

And I believe this is the time in New York City when we need someone who understands the people at the bottom, what their needs are and what we need to require from them to be able to move our city onto the greatest heights that we’ve ever been able to have. Because we are very close now. It’s just some people have been left out for too long, and I have a history of being able to include them.