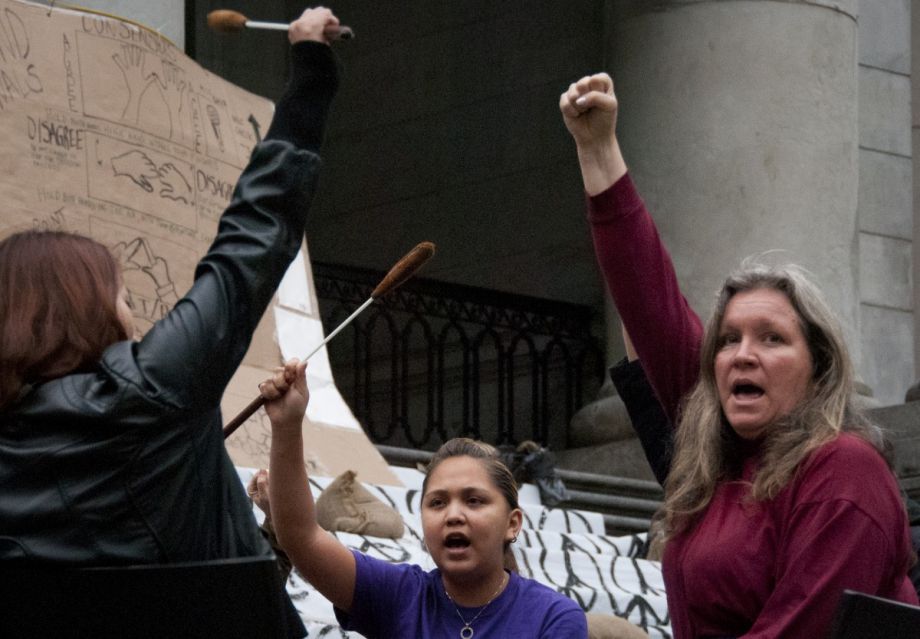 A 2011 protest against a commission charged with investigating disappearances of people from Vancouver's Downtown Eastside. Many of the missing were sex workers. (Photo by Caelie_Frampton via Flickr)

The silver lining of gentrification, we are often told, is safety: As neighborhoods become wealthier, they not only get more public investment and better amenities, they also see increases in police attention and decreases in crime that will benefit long-term residents if they can afford to stay.

It’s already a fraught hypothesis. An increase in affluent white residents may just lead to more police profiling that disproportionately affects people of color. Falling crime might be spurring gentrification, not the other way around.

Now a new study out of Vancouver found that for at least one population, gentrification contributed to decreased safety and an increased risk of violence. Trans sex workers in the city’s developing Downtown Eastside are facing more harassment from law enforcement, private security guards and new residents, while being forced to work in more isolated, more dangerous areas.

Vancouver has been here before. The city purged sex workers from the West End in the 1980s, only to later acknowledge that scattering the community made them easier victims. Today, it is legal to sell sex in Canada but illegal to buy it, advertise for it or to make money off sex workers’ labor (that includes an escort hiring an accountant, by the way). But as development and rents continue to soar in Vancouver, moral values and property values dovetail when it comes to sex work.

“The moral panic of sex work is definitely at play when it comes to gentrification,” says Jill Chettiar, a research coordinator for the project, published by the Gender and Sexual Health Initiative of the British Columbia Centre for Excellence in HIV/AIDS (BC-CfE). “It’s also this social construct of what comprises a good versus bad neighborhood.”

The Downtown Eastside has long been known as a sex work stroll, but gentrification brings with it middle-class values, which are being retroactively imposed on current residents. Whereas sex workers could once look for clients on the neighborhood’s commercial streets, they are now getting pushed into residential and light industrial areas. They are also taking clients to more isolated places, like along railroad tracks, where they have a harder time escaping violent clients or calling for help.

“Gentrification creates increased risk of visibility or observation from new community members that may be uncomfortable with sex workers living and working in their community, [which] has pushed sex work further into secluded areas,” says Brenna Bezanson, communications coordinator and community liaison at PACE, a peer-led organization working with and for sex workers in Vancouver. (A former PACE employee co-authored the new paper.)

One study participant told researchers she felt frustrated by this judgment from new residents, and by their willingness to call the police. “She has been working there for over 15 years and is a business owner herself in her line of work,” the paper states. “Sex workers are a part of the neighbourhood as workers and many also live in the area; however they are framed as outside, or not belonging, to the neighbourhood.” Discussing new residents’ hostility, she asked, “Well, why did you move here?”

Researchers interviewed 33 sex workers for the study, the majority of whom were indigenous and all of whom identified as either transgender, transsexual, genderqueer or two-spirit. They also conducted walking interviews with several sex workers to assess how changes to the built environment were affecting their working conditions.

During the course of the study, businesses installed gates over their entrances, including over alcoves in which sex workers had gathered to get out of the rain and do their makeup. Calls to cops from new business owners increased. The researchers documented places where sex workers took clients along railroad tracks, and where they had cut holes in fences in case they needed to escape.

A road construction project that changed the traffic pattern also caused a major disruption. Suddenly streets on which potential clients could easily have pulled over had bumper to bumper traffic — too many observers to make an arrangement. More sex workers were being stopped for minor or perceived violations, and both police and private security forces were shining lights or parking on popular corners.

This contributed to a cascading decline in safety and solidarity. Those not internet-savvy enough or without the access to advertise online still had to work the streets for clients. But the increased scrutiny led to greater competition between sex workers for fewer safe spaces, and led some workers to lower their prices to undercut the others.

Whereas sex workers had previously worked together to keep an eye on each other and enforce condom use and fair prices with clients across the board, “that becomes more and more fractured the farther people need to go and the less conspicuous people need to make themselves,” says Chettiar. “It’s really market pressure that ends up eating away at that [solidarity].”

All of these factors ratchet up risk. Because it is illegal to purchase sex or to publicly communicate about purchasing sex in Canada, the increased scrutiny led sex workers to get into cars with clients before discussing rates or conditions. And while cisgender and trans sex workers alike have been pushed from their usual locations, “these kinds of pressures are felt more acutely and with greater effect by people who are part of these more marginalized sectors of already marginalized communities,” says Chettiar.

Over the years the city has had a shifting, unspoken geography of sex work. After the crackdown on the West End, the Downtown Eastside became known for trans sex workers. The development pressure is changing that in dangerous ways. “If a client picks up a trans sex worker and doesn’t realize she’s a trans worker, and that gets discovered later when they’re parked in a car in an isolated area, the risk of violence is huge,” Chettiar says.

Gentrification has also impacted sex workers’ ability to work safely from home. “What we know, and all of the evidence indicates, is working indoors, working from home is much, much safer than working on the street level,” says Bezanson.

But many of the former single-room-occupancy hotels in the Downtown Eastside were converted to hotels or hostels around the 2010 Winter Olympics. And those that remain are being fixed up and sold as “micro-lofts” at rents above $1,000 a month.

“We have members that are waiting months, or in some cases have been on wait lists for housing for over a year,” says Bezanson. “Shelters are full, all the time, and trying to get someone into even a temporary short-term shelter can be nearly impossible.” When sex workers do gain access to government-supported social housing, guest restrictions ensure they still can’t work from home, and risk losing their housing if they do.

“The rest of us would not tolerate living in a building where someone was telling us who we can have over and when,” says Bezanson.

Compared to other cities, Vancouver has at least taken strides to recognize the needs of sex workers, and acknowledge the ways city policy has hurt them. A memorial was erected in the West End last fall honoring the sex workers who were driven away by the 1980s anti-prostitution crusade. Some of these workers later fell victim to serial killer Robert Pickton and others who preyed on sex workers on the Downtown Eastside. Over 60 women, many of them indigenous, disappeared from the neighborhood from the 1980s to 2002.

Both Bezanson and Chettiar would like to see further steps from the city. Vancouver has been a leader in harm reduction when it comes to substance abuse, legalizing safe injection sites for drug users. But “it does seem it’s been harder in public discourse to find that safe place in the moral quagmire surrounding sex work and the sex work industry to start advocating for what we might think of as harm reduction measures,” says Chettiar.

She recommends that the city realistically appraise all of the economic activity in a neighborhood — legal, semi-legal and otherwise — before approving any projects, and then consult with marginalized workers for their perspective.

“Cities need to do a better job of speaking up and saying, we are all members of this community, and speaking out in support of the most marginalized people in our communities,” says Bezanson. Both agree that decriminalization is the ultimate ask, as it would allow sex workers to control the price of their labor, work from safe places and have recourse to the law. In its absence, Bezanson says, Vancouver could at least lift guest restrictions on social housing.

“That’s something that could happen right now, without decriminalization or passing any huge legislation. I think that the city could speak out about that right now and that would have a huge positive impact on sex workers’ safety,” she says.