What Would an Ungentrified New York City Look Like in 2034? – Next City

What Would an Ungentrified New York City Look Like in 2034? 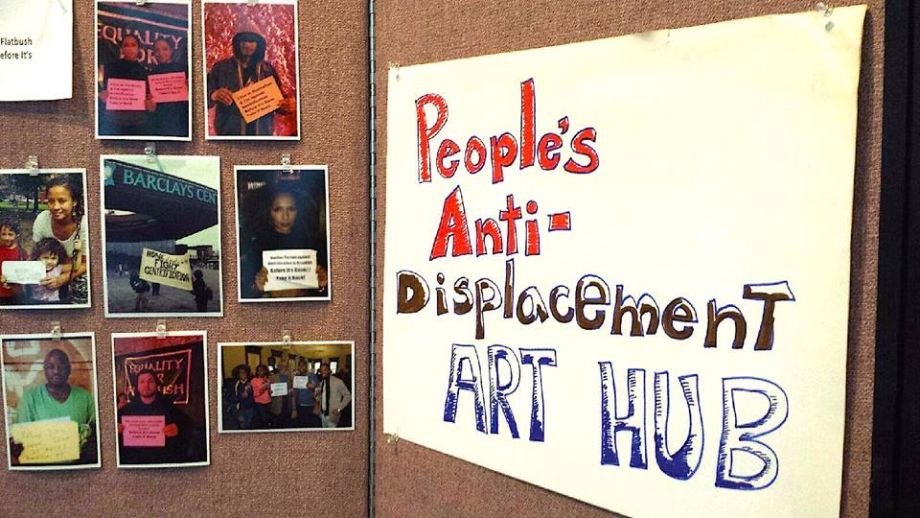 Last week, the event Imagining: Creative Strategies to Fight Gentrification in NYC brought nearly 300 people together to consider what their neighborhoods could look like in the year 2034 — that is, if strategies are implemented to successfully curb the displacement of low-income people and people of color from the five boroughs.

Betty Yu, selected as a 2015 cultural agent by the U.S. Department of Arts & Culture, helped to organize the event. Yu, who is an artist and storyteller who focuses on social justice, says that through organizing such events she’s “not interesting in duplicating organizing or campaigns but rather be a place where we can connect people, organizations and networks to one another.”

I spoke with Yu about how her experiences growing up as a child of immigrant garment workers led her to her work and creative tools for combating gentrification.

As the daughter of garment workers, when and how did you start to relate their experiences to your creative work?
My sisters and my grandmother who helped raised me also had to work under the same dehumanizing slave labor conditions in the sweatshop economy of NYC’s Chinatown. [At the time] I didn’t see the mainstream media or even the ethnic Chinese media reporting or shedding light on these conditions.

As a teenager I got heavily involved with a workers’ rights organization fighting to improve the conditions of immigrant Chinese workers in the 1990s. It was then I saw how media and storytelling can be a powerful tool for social change.

I then decided to purse photography and documentary filmmaking as a tool to advance social, economic and racial justice.

Why has gentrification become such an important issue for you?
I grew up in Sunset Park’s Chinatown in Brooklyn and grew up going to Manhattan’s Chinatown. Within the 12-year reign of Mayor Bloomberg and his over 120 rezoning plans, he effectively put in place a master plan to massively displace working class, immigrants and people of color from their own neighborhoods. These effects will be felt for generations to come. We must take it back now and fight back now.

I am seeing neighborhoods being uprooted of their culture, language, sense of history and people. I also believe we are at a crossroads in the organizing work where we have to come up with new creative ways of organizing. These real estate developers are accelerating gentrification and are trying to pit poor working-class residents against other residents who also need a place to live and have more flexible income to pay higher rents. But the real culprits are the real estate developers. We need to figure out how to shift the public debate and to push for just housing policies.

A scene from Imagining: Creative Strategies to Fight Gentrification in NYC (Photo by Betty Yu).

What idea made the most impact on you from the event the other night imagining NYC in 2034?
The event was presented in two major acts. The first act was a presentation of organizers, cultural workers, media makers and activists who talked about the creative ways they have tackled gentrification. Part two had participants break into groups by borough and do a visual imagining and mapping exercise. Participants used only symbols and pictures to express the current conditions in their neighborhoods, what housing justice looks like in 20 years and the path it would take to get there.

We connected those organizing in the front lines with others who have a stake in this fight — artists, activists and those yearning to get involved in current organizing. One participant who attended said, “I can’t remember an event where people were so engaged and stayed for so long.” The collective maps the participants created will be compiled and shared out and will inform future imagining events. Our next big gathering will be a community potluck on July 12th.

What are your favorite creative strategies to fight gentrification?
[During Occupy Wall Street] Occupy Our Homes was a deliberate effort where displaced working-class people were being supported by allies to protect homeowners from foreclosure. The group would use their bodies to occupy homes to try and stop evictions from banks, hold rent strikes and claim back their own homes.

Sandy Storyline has helped to tell the stories of people who have been devastated by the Hurricane and are fighting displacement. The interactive, user-generated website allows for video, audio or picture documentation to be shared.

Finally the selfie series “Take It Back Before It’s Gone” by Equality for Flatbush has been effective in NYC.

This interview was edited for length and clarity.