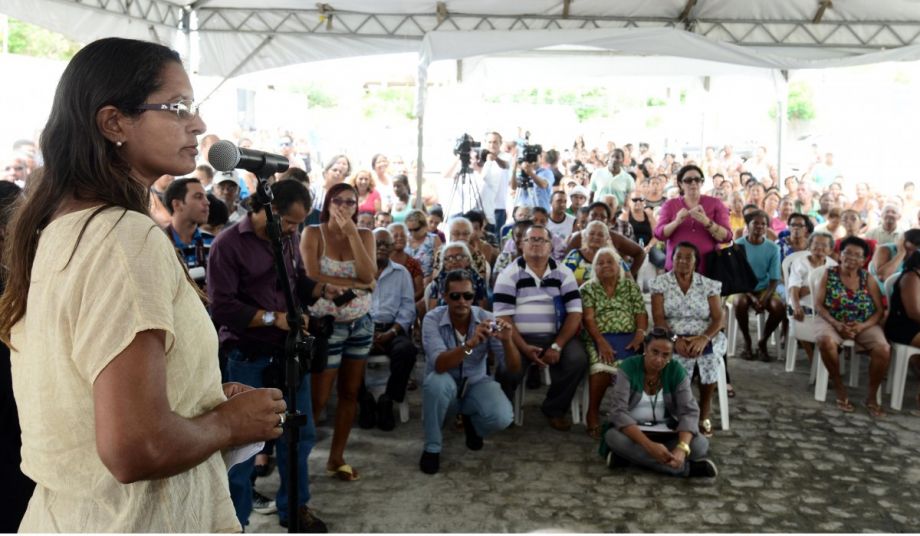 Conceição Duarte Belo, the president of the Associação de Moradores de Chié, speaks at a community meeting about how land titles are handled.

On October 17, the Habitat III conference opens in Quito, Ecuador. Its primary objective is for UN member states to adopt the New Urban Agenda (NUA), reflect on the agreements reached, and elaborate on policy and planning processes for its implementation across the globe.

In the extensive rounds of consultation on four versions of the draft NUA, the voices of women have been heard at global, regional and country level debates. Along with international bureaucrats, state officials, city mayors, civil society, academics and NGOs, these have included representatives from important global gender networks such as WIEGO, SDI and the Huairou Commission. The strength of the women’s lobby is demonstrated by the fact that the number of paragraphs with references to women in the NUA has more than doubled, from 14 paragraphs (out of 175) in the first zero draft in May 2016 to some 32 paragraphs (out of 175) in the final outcome document. But now that the ink is dry with this latest NUA draft, what do these commitments mean in practice?

The NUA’s shared vision certainly sets the bar very high, and worth quoting, with its stated aim to: “achieve gender equality and empower all women and girls, ensuring women’s full and effective participation and equal rights in all fields and in leadership at all levels of decision-making, and by ensuring decent work and equal pay for equal work, or work of equal value for all women, as well as preventing and eliminating all forms of discrimination, violence and harassment against women and girls in private and public spaces.”

But is this a utopian ideal rather than a practical possibility? While it is undoubtedly too early to answer this question, further unpacking the representation of women and the underlying policy approach in the 32 commitments can provide early pointers as to likely outcomes. On the positive side are the following three critical commitments with transformative potential — meaning that they have the capability not only to empower individual women, but also to transform gender power relations in cities.

These three have been highly contested and negotiated through the NUA process, and despite “dumbing down” of language, are still present and critical for achieving urban structural transformations. This is a real and impressive achievement. As WIEGO’s Sally Roever comments:

“The NUA turned out more balanced and inclusive than we would have predicted. It explicitly commits to recognizing the contributions of the working poor in the informal economy, very important for our network, especially women.”

Less optimistic are the NUA commitments for effective implementation of these three transformative priorities. Despite a broad overarching commitment for “measures to promote women’s full and effective participation and equal rights in all fields and in leadership at all levels of decision-making, including local government,” there are no gender-specific references in, for instance, the implementation of transformative land tenure rights, or measures to address the rights of informal sector workers; while safety and security is identified entirely as a spatial issue through the “Provision of spaces free from crime, including sexual harassment,” rather than also a social and economic challenge.

Sheela Patel from SDI reflects a more general distrust with the widespread ‘dilution’ that occurs at the level of implementation when she states: “After many decades of feminist activism, what’s included on gender in global agreements ensures politically correct postures. What our government originally agrees always gets diluted. When proposals get written up the gender box is filled, but clearly absent in the delivery and execution of the projects.”

A critical challenge therefore is to ensure that dilution does not occur in the implementation of these three priory transformative commitments.

Far less positive in the NUA is the even larger number of commitments, to “age- and gender-responsive” interventions without any clarity as to what the term “responsive” really means other than “including,” or what is involves in practice. With more than 10 such commitments, these really would seem to be no more than a very generic urban planning mantra irrespective of context. Commitments range from age and gender-responsive integrated approaches to urban development / urban territorial and planning processes; planning for urban mobility; housing policies; sub-national and local government dialogue; and policies and plans for disaster risk reduction. At the level of implementation, the only commitment mentioned is to age- and gender-responsive budgeting.

Third, and least progressive of all, are the 14 commitments to a range of mainly “welfarist” interventions that include women as one of a large composite “vulnerable group” of overlapping — and at times changing — categories, but most commonly composed of nine groups. Along with women, these include children, youth, persons with disabilities, older persons, indigenous peoples, grassroots organizations, informal inhabitants and workers, farmers, refugees, returnees and internally displaced persons and migrants. NUA commitments include, for instance, productive employment, services responsive to rights and needs, improved road safety and government capacity to work with women and increase their skills as one of numerous categories. They also include up to nine categories for data collection — even though as of 2016 adequate gender-disaggregated data does not exist at the global level.

Above all, this composite grouping of women as part of vulnerable groups presents very real challenges for women’s priorities in terms of their inclusion in stakeholder engagement around the implementation of the NUA. Although the NUA refers to “stakeholders” nearly 30 times, women end up being just one of a long list. Added to this, they tend to be under-represented in many stakeholder groups such as local governments, the private sector, professionals, academics, trade unions and employers’ organizations.

So overall, there are real challenges around positioning women, particularly poor women, in the implementation of the NUA. Issues may become clearer as Habitat III unfolds, but the evidence so far suggests that global urban gender networks, civil society and grass roots institutions in cities across the world need to actively resist any collusion with the meaning and language of “gender-responsive” commitments, and to assertively ensure that composite categories get further deconstructed to identify the specific interests of women. Above all they need sustained collaboration to ensure that the three transformative commitments of land tenure, safe cities and employment opportunities do not become invisible with their strategic transformative goals eroded during implementation processes.

Caroline Moser is an urban social anthropologies, social policy specialist and emeritus professor at the University of Manchester. She is also editor of the recently published “Gender, Asset Accumulation and Just Cities” from Routledge.