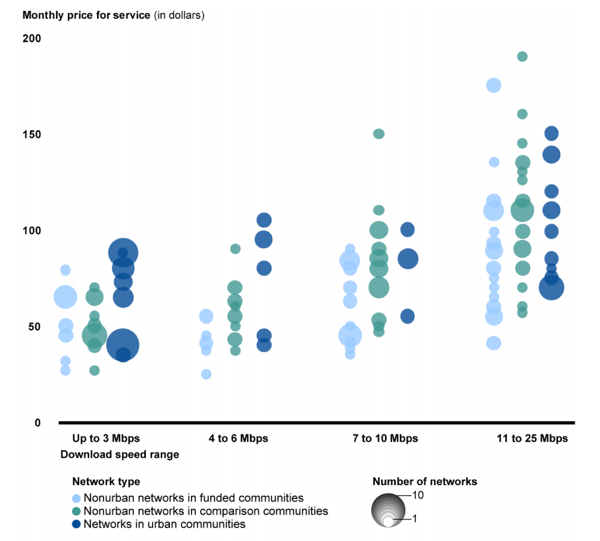 The Government Accountability Office is out with a new report that looks at government involvement in broadband rollout in 14 “funded” communities in the U.S., from Dawsonville, Ga. to Gervais, Ore. Ten of the study areas received some of the $15 billion that the feds have paid out to broadband providers since 2008, and four have municipally owned broadband networks.* GAO compared broadband speeds and prices in those communities to similar, nearby communities that didn’t receive the same sort of government engagement.

The results? In nine of the 14 communities, the funded broadband was faster compared to both non-funded local networks and networks in comparison communities. It tended to be slightly cheaper, too:

GAO also examined the data’s geographic dimension and found that in U.S. cities, broadband of all kinds tends to be less expensive than connections of comparable speeds outside cities. For example, “For speeds of 11 to 25 Mbps, urban areas offered prices that were on average $21 less than nonurban areas.”

Those results aren’t hugely surprising. Federal funding is often used to upgrade or expand networks in places where geography, population density or other factors make rolling out broadband less appealing to private providers. Government-funded networks tend to be newer and, partly as a result, make use of more modern and faster technologies. And subsidized networks can often be, for obvious reasons, less expensive for customers.

But combining the findings produces an interesting outcome when it comes to the broadband gap between city and non-city places. Here, in GAO-ese, is the relevant paragraph:

In other words, in nearly every case where non-city areas have city-like broadband speeds, government involvement closed the speed gap. This fact is fodder for those who argue that the free market alone isn’t enough to modernize the country’s broadband infrastructure.

That said, even though the U.S. has spent billions on boosting broadband, it hasn’t reached every corner of the country. Last weekend, a tree rubbing up against a fiber-optic cable took down much of western Hawaii’s communications network for nearly a day. Part of the challenge in that neck of the woods comes from having to instal utility poles in lava rock. Locals had applied for federal funds to close a gap in the network, but didn’t get them. 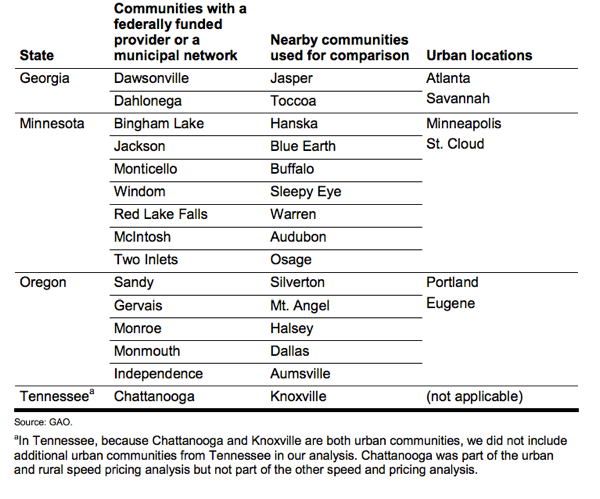