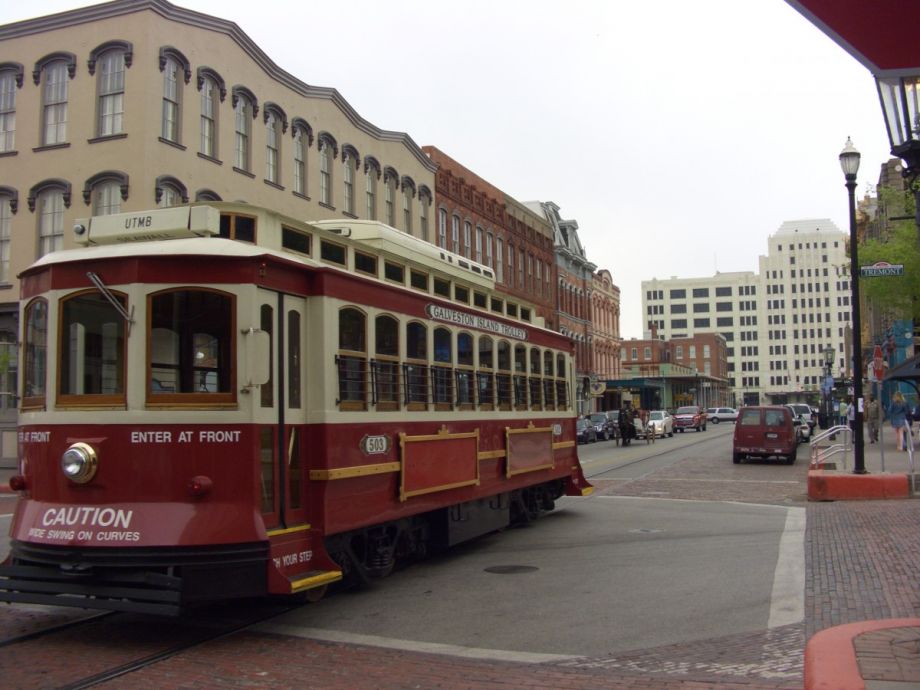 A trolley rolls along the Strand in Galveston — before Hurricane Ike hit in 2008. (Photo by (WT-en) Evan at English Wikivoyage)

Feds to Galveston: Restore Trolley or Repay Us
Hurricanes have not been kind to Galveston, Texas. A 1900 hurricane wiped out the city, leading to the construction of the massive seawall that protects the city from storm surges. That seawall, however, proved incapable of protecting the city’s heritage trolley system from damage that knocked it out of service when Hurricane Ike struck the city in the fall of 2008. The storm both damaged the city’s four diesel-powered replica trolleys and ripped up portions of the system’s two routes.

The city applied for federal grants to repair the trolleys and track in 2009 and received the money the following year. Now, nearly five years later, the system remains out of service and the feds are getting impatient.

The Daily News of Galveston County reports (subscription required) that the Federal Transit Administration sent the city a letter Jan. 5th stating that it has “failed to make reasonable progress” in restoring the line to operating condition. The letter added that the two federal grants, totaling $3.78 million, would remain open if the city could furnish evidence that the restoration project is active.

Were it not to do so, the city would have to repay not only the two grants — one for $1.82 million to repair the vehicles and a $1.96 million grant to rebuild the tracks — but also federal funds used to return trolleys to the city in the 1980s and a later grant to extend the initial line. Both of these grants required the city to operate service for a period of time that has not yet expired. The city could end up owing the FTA some $7.3 million in addition to the cost of removing the tracks if it does not restore service.

The letter puts the onus on the City Council to decide the trolley’s fate. One Council member opposed reviving the trolley, citing its persistent large operating deficit, but transportation consultant Barry Goodman told the council that the problems that caused the deficits would be dealt with in a revised operation and that the city had the funds in hand to reopen the system: “We believe that we can repair these trolleys and bring them back to modern-day standards. This system can be operated efficiently and affordably.”

A restored system would continue to run an operating deficit, however, and the city has not yet identified how the shortfall would be covered.

The Daily News report states that the council is likely to take up the issue at a Feb. 5th meeting.

Delhi Beefs Up Bike-Share Feeder Network
A number of cities around the world are making bike-sharing an integral part of their mass transit system, using it as a means of extending the reach of rail transit beyond locations within walking distance of stations. The Indian city of Delhi is one of these. According to a report in Railway Gazette International, Delhi Metro and Greenolution jointly announced on Jan. 8th that the Public Bicycle Sharing program launched at Vishwa Vidyalaya station in 2007 would be expanded to an additional seven stations.

The system allows pre-registered users to check out bikes at stands in residential neighborhoods, ride them to a stand at the nearest metro station, then check out a bike at the end station to reach their destination. The partners say the program is designed to provide “first mile” and “last mile” connectivity to points beyond the walkshed of Delhi Metro stations. Users pay for bike-shares with smart cards and can receive status updates via text message and e-mail.

The 7.7-km east-west route with 11 stations will become part of a larger loop line serving the city’s Haizhu District. The tram line runs along the south bank of the Pearl River from Canton Tower to Wanshengwei. It connects with Guangzhou Metro Line 3 and the Zhujiang New Town Automated People Mover at Canton Tower and with metro lines 4 and 8 at Wanshengwei.

During the line’s trial period, service is operating every 13 minutes from 9 a.m. to 5 p.m. The 100 percent low-floor trams built by CSR Zhuzhou are powered by supercapacitors. The line is operated by Guangzhou Metro Corp. subsidiary Guangzhou Tram Co. Ltd.