The High Cost of Non-Resilient Infrastructure – Next City

The High Cost of Non-Resilient Infrastructure 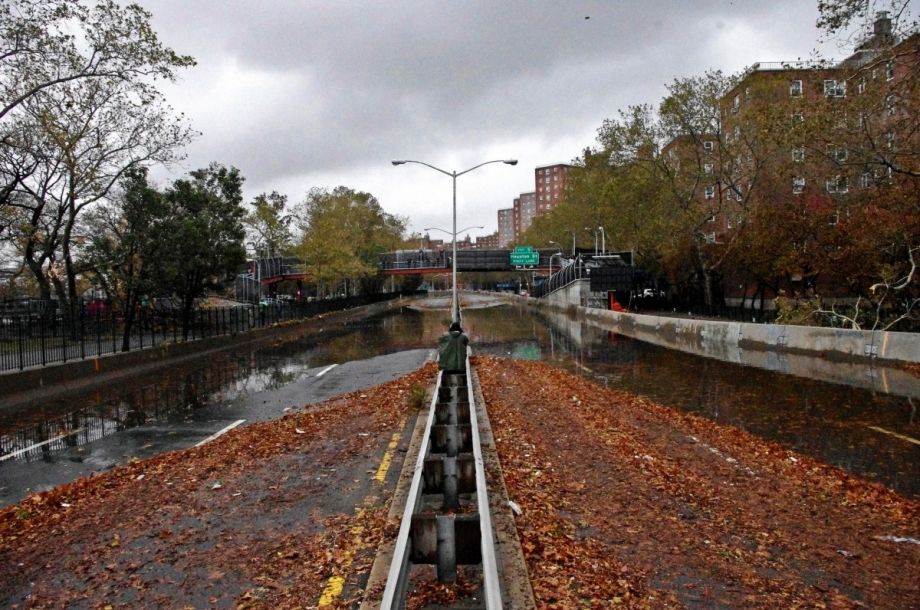 On the evening of October 29, 2012, as Hurricane Sandy pummeled New York City, water began rising around Con Edison’s 13th Street substation in Manhattan. The substation, located in a flood zone, had been designed to withstand water up to 12.5 feet, but Sandy brought a 14-foot surge. The transformer blew and lower Manhattan went dark. More neighborhoods followed, disconnected as a precaution against overloading the power grid. Critical facilities were evacuated. NYU Langone Medical Center had two backup generators; both failed.

Sandy made New Yorkers, and all Americans, painfully aware of the need for more resilient city infrastructure. Resilience has since become a buzzword in planning circles, often understood to mean either robustness (for instance, a substation that’s totally flood-proof) or redundancy (multiple microgrids that can operate separately in case of a shock to the system). According to a new report, resilience encompasses both of these qualities, but also many more: flexibility, responsiveness, coordination and learning to live with unavoidable uncertainty and risk.

The report, Toolkit for Resilient Cities, sprang from a desire to broaden how people think about preparing cities for climate impacts, says one of the authors, Stephen Cook, an energy and climate change consultant with Arup in London. “It’s not just about flood defenses and raising the barriers,” he says. “It’s about understanding how infrastructure systems interact with the rest of the city, and how they can together create a resilient city.”

Written by researchers from Arup, Siemens and the non-profit Regional Plan Association, the report defines resilience as “[t]he capacity of people, organizations and systems to prepare for, respond, recover from and thrive in the face of hazards, and to adjust to continual change.” Its authors note that between 2000 and 2012, natural disasters around the world caused $1.7 trillion in damages. Extreme weather events are happening with more frequency, while the global population (especially in cities) continues to grow. In other words, the problem is only becoming more urgent.

Toolkit for Resilient Cities outlines how cities can enhance the resilience of their infrastructure systems to prepare for the next Sandy (or the next drought, heat wave or blizzard). It focuses on the infrastructure supporting energy, transportation, water and buildings, because this “underpin[s] many other essential city operations and services, including sanitation, emergency response, and the delivery of food, fuel and other materials.”

Changes to the human systems involved in resilience aren’t just gloss, Cook says — they’re absolutely crucial. Cook and his co-authors emphasize the importance of collaborative governance, farsighted land use policies, sensitive urban design, and extensive data gathering and analysis. “It’s not just about infrastructure and technology. Without that enabling framework, putting the other pieces in place, their full potential just won’t be realized.”

A case study within the report looks at vulnerabilities in New York City’s electrical grid and suggests steps that would mitigate the risk to it. Our very understanding of that risk needs to change, too; historically, New York experienced significant flooding about once a century, but climate projections put that closer to once every 15 years in the future. And there are new risks to consider, like tornadoes that have hit the city every year since 2010.

The researchers plot three courses that New York can take with regard to the resilience of the grid. The first is to do nothing, which has a price tag of about $3 billion over 20 years. The second is to increase the grid’s robustness by waterproofing substations and equipment, putting power lines underground and other such measures. This would reduce the cost of repairs and emergency response by about $2 billion.

“However, the robustness investments provide only a defensive solution which can at best reduce losses,” the authors point out. The third course, “full investment” in smart technologies like distributed generation and strategies like demand reduction, would cost $3 billion to implement. It would not only pay for itself, but deliver an estimated $4 billion of added benefits through energy efficiency and reduced disruption to businesses.

Cook acknowledges there are barriers to cities getting on board with an aggressive plan like this. Many cities are strapped for cash, and it’s hard to justify spending money today to solve the problems of tomorrow. Financing infrastructure upgrades remains a major hurdle. But the good news is that the technologies described in the report are developed and proven, not experimental — cities can adopt them today if they choose to.

Take, for example, Co-Op City, a housing development in the Bronx. Its microgrid serves 60,000 residents in 35 buildings. During and after Sandy, it continued to provide heat, electricity and hot water as large sections of the city struggled with a days-long outage. The microgrid required an upfront investment, but it sold surplus power back to the larger grid, and paid for itself within five years.

Now imagine if the microgrid had been “talking” to response teams or feeding power to critical facilities that needed it. Cook thinks we’re not far from having this sort of real-time information about a city’s physical assets, the way we already do about traffic congestion. “It’s about … getting closer and closer to real-time information,” he says, “and then having the capability to process what’s going on” during a disaster, when every moment counts.