Functional and Economical, Cargo Bikes On the Rise – Next City

Functional and Economical, Cargo Bikes On the Rise 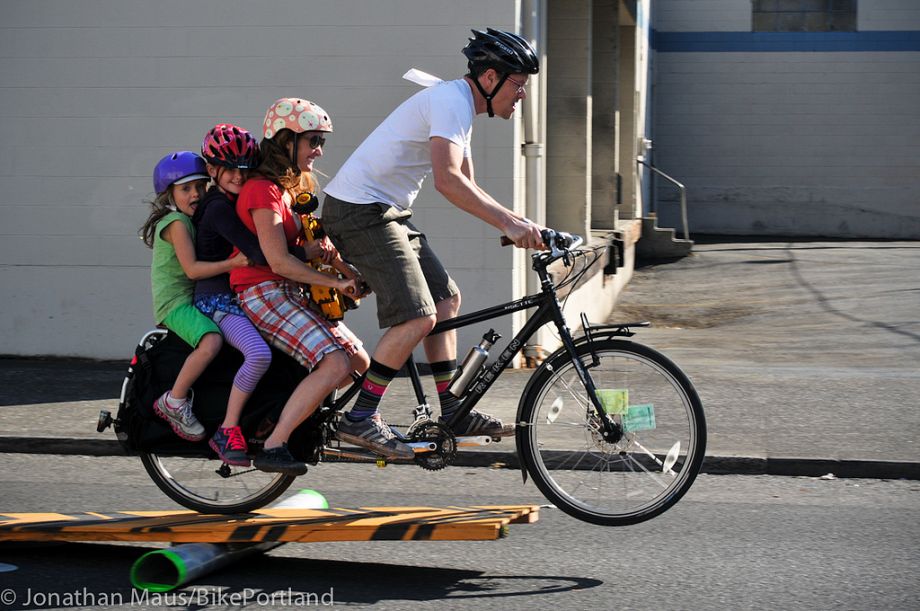 Dad will turn this bike around if you two don’t behave. Credit: Jonathan Maus/Bike Portland on Flickr

Bakfiets and longtails sound like fitting names for a rare bird species, but are actually names for an increasingly common household inhabitant: the cargo bicycle.

The Xtracycle Radish has a built-in extended rear wheel base for transporting cargo, kids or both.

A cargo bicycle is a bike accessorized or outfitted to transport items or people. Any old bicycle with a basket, pannier or trailer is functioning as a cargo bike. But they can get much fancier than that: Add-ons like the Xtracycle Freeradical customize standard bikes with a rear platform for cargo. Even higher-end models consist of a single-piece frame with an extended front or back end and sometimes a built-in box or wagon.

Unsurprisingly, these bikes are popular in Denmark and Holland. The company Copenhagenize estimated in 2009 that 6 percent of households in Copenhagen owned at least one cargo bike, which comes out to roughly 30,000 cargo bikes in the Danish capital. The rest of Europe is catching on, too. The Cycle Logistics project, a combined effort of twelve European Union countries, aims to increase the usage of cargo bikes as an alternative to cars and trucks. According to the European Cyclists’ Federation, over 25 percent of goods in cities can be transported by bike, and if lighter goods are added to the mix, this proportion increases to 50 percent.

Cargo bikes are also common in emerging economies, as they offer an affordable means of transporting goods for those with limited or no access to cars and trucks. Notable among these are cargo tricycles in China which vendors, recyclers and others use to transport loads that are at times impressively large.

In the U.S., too, these sturdy bikes are growing in popularity. NPR reported that while most cargo bikes are imported from Europe or China, domestic manufacturers are on the rise. Cargo bikes made here are designed to handle hilly terrain that is less of an issue in flatter European cities like Copenhagen or Amsterdam.

Entrepreneurs are among those contributing to the growing demand for cargo bikes. A key reason for this relates to scalability: Bikes offer an affordable means for start-ups to get off the ground. Grace Wicks of Graceful Gardens started her company in 2008 using a bike trailer to transport her gardening tools and supplies. A commuter cyclist, she chose to use her bicycle in her business for practical reasons.

As the number and size of her gardening jobs grew, however, Wicks had to invest in a truck to transport the quantity of gardening tools and supplies she needed. Gabriel Mandujano, founder of Wash Cycle Laundry, explains that the practicality of using bikes to transport cargo depends on the business. With the aid of route planning software, he determined that using bikes in his business would be three times cheaper than using trucks. By saving on amenities needed for trucks, such as a parking lot or loading docks, he could afford a more central location in Philadelphia.

Mandujano describes how services relying on responsiveness may find that bikes allow them to cover more places at any given moment than, say, one or two trucks would. The type of goods transported is also an important consideration: Laundry, parcels and certain types of food may not be too weighty or bulky as compared to liquids or bales of hay.

The majority of cargo bike customers, however, are those simply looking to haul groceries or children. Cheaper than cars, SUBs (sport utility bikes) offer a promising alternative to our beloved SUVs. Buc Syski of Kasper’s Cargos, which distributes cargo bikes throughout the East Coast, cites rising gas prices, improvements to cargo bike technology and cultural shifts among the reasons he sees for their rise in popularity.

This proportion of young folks deciding not to bother with cars is on the rise. The Detroit Free Press reported on a 2010 study by the University of Michigan Transportation Research Institute indicating that over 30 percent of 19-year-olds did not have a driver’s license, up from 24.5 percent in 2008 and 12.7 percent in 1983. Migration to cities, improvements in technology relating to alternative transportation and changing values and preferences are among the reasons for why this trend is occurring.

Thrifty and environmentally conscious, the young and car-free make up a ready population that can bring cargo bikes from niche to common usage. But this will not be without its challenges. For one, the types of cargo bikes capable of carrying larger loads could pose financial hurdles for this population. Some of these, such as the top-of-the-line Bullitt, reach well into four-digit price levels.

Bullitt bikes like this one at the Philadelphia Bike Expo handle the heaviest loads but come at a higher price.

Perhaps your typical student, post-grad or young professional household will jointly own a cargo bike. Or cargo bikes could be publicly shared, but this may not happen anytime soon. Russell Meddin of Bike Share Philadelphia emphasizes the need for homogeneity in successful bike share programs: Customers need to know that there is going to be a bike they want to use at a given station. Funky, elongated bikes may intimidate budding cyclists and discourage them from hopping on for a ride.

So, first things first: Station cargo bikes at stores where they may be particularly useful. In 2008, Ikea of Denmark started doing just that.

Safety presents another hurdle for making cargo bikes more commonplace, especially among parents transporting children. This points to the other half of the equation: A ready and willing population needs continuing expansion of and improvements to bicycle infrastructure.