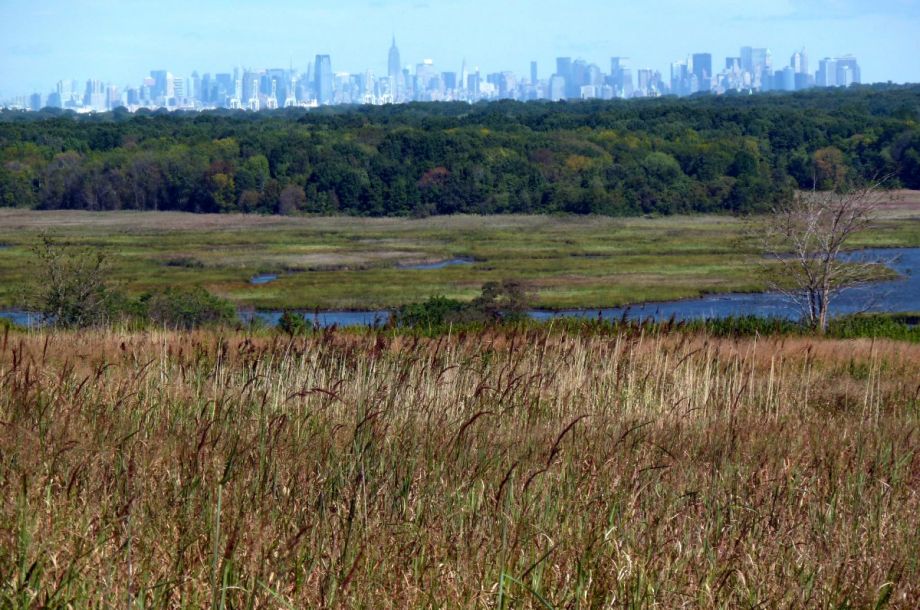 The Freshkills Park site occupies 2,200 acres on the western shore of Staten Island.

Converting Manhattan’s High Line railroad track into a public park required a fine-toothed, well-controlled design strategy. It was possible, and necessary, to account for every planting, bench and variation in the surface of the walkway.

Turning the Fresh Kills landfill on Staten Island into Freshkills Park? That demands an approach on a completely different scale. At four square miles, the site is three times the size of Central Park. Here, the vastness of the landscape swallows the minutiae of human intervention.

“We call this a ‘theater of process,’” said landscape architect James Corner, of James Corner Field Operations, speaking at the High Line this week. How does a designer approach such a daunting task? “Perhaps instead of designing a wonderful master plan that is unlikely to be built in all its perfection, maybe we should design a process,” he said. “A process around which this very large and complex landscape can begin to grow over time.”

Freshkills Park is a work in progress, not yet open to the public on a regular basis. A joint venture of the city’s parks and sanitation departments, it occupies a 2,200-acre site on the western shore of Staten Island that was once the largest landfill in the world. The dump opened in 1948 under the auspices of Robert Moses, and the last barge filled with New Yorkers’ trash sailed for Fresh Kills in March 2001. The landfill reopened temporarily later that year to sort the wreckage from the World Trade Center. When that work was done, it closed for good.

After Fresh Kills shut down, city leadership chose to take advantage of a remarkable opportunity: To develop a huge tract of land that had been effectively exempted from the development trends of the late 20th century, heal it, and give it back to the public. Freshkills will become the largest park that New York has built in more than 100 years, and it will take 30 years to complete.

The vision for Freshkills encompasses grassy lawns and mountain bike trails, kayaks launches and amphitheaters, jogging paths and public art. Visitors will enjoy magnificent views of Manhattan and have unprecedented access to the park’s web of waterways.

The Freshkills Park site, the largest landfill-to-park conversion ever attempted, presents a number of unique challenges, according to Corner. First is the number of stakeholders. There are state, municipal, and local boards and agencies; the members of the Staten Island communities surrounding the site; and the citizens of the city at large. Each has a vital interest in what happens here, from the New York State Department of Environmental Conservation, charged with protecting the natural resources of the area, to the local community board.

Then there is the sheer size of the task at hand. Freshkills is big enough that it would cover Manhattan from the Battery to 26th Street, from end to end of Houston Street. It is bisected by a major highway and laced with tidal creeks. It demands, as Corner said, “agricultural-scale” solutions.

And this is, after all, a landfill. Beneath the layers of soil and impermeable plastic sheeting (yes, the garbage is safely wrapped), all that trash is decaying. In the process it lets off gas that contains methane, which is captured for sale to the local gas utility, and a liquid known as leachate — pretty much the same stuff you find at the bottom of your trash can if you don’t empty it in time, Hirsh said. The leachate must be processed and managed. Storm runoff from the slopes of the manmade hills must be channeled and contained.

As the mounds of refuse degrade and decompose, they settle. “They deflate over time,” Corner said. The landscape itself is restless and constantly shifting. “It poses a lot of challenges as to how to make this into a public landscape,” he added. “It’s a process of recolonization.”

But that process has begun. Slopesides are prepared for seeding by a crane that runs a sort of knobby roller over the ground, leaving divots where plants can take root. To improve the soil, which is dense with clay, nutrient-rich plants can be grown and mowed under year after year, until they create a layer of healthy dirt.

Animals, too, will play a role. Already a herd of goats is being deployed to mow down invasive phragmites in the park’s wetlands. “Husbandry is in the future of this place,” Hirsh said.

Slowly, bits and pieces of the park are opening, and the hope is to increase access gradually with capital funding from the city. Scientists are doing small-scale research programs on the local wildlife, such as bats and turtles. School groups come by for frequent tours. A playground at the perimeter has already been remodeled and doesn’t want for neighborhood children. Soccer fields have been opened at the park’s southern edge.

The next major area that will open to the public is a 21-acre section on the park’s northern side, where there will be jogging paths, bike trails, a bird observation tower and picnic lawns. That plan is going through a permitting process now and the plot could open within two years.

The key with Freshkills will be patience. For generations, this was quite literally a dumping ground. It will take another generation before the transformation is complete. And yet already, trees and wildflowers are flourishing on the site. Deer, coyotes and foxes all live here, and shellfish have taken hold along the muddy shoreline. This huge chunk of contiguous habitat would never have been possible if it weren’t for the dump.

Hirsh showed a series of pictures from all seasons that revealed the peaceful expanse of grass and trees and water at Freshkills, a massive swath of green hidden in the heart of New York Harbor. “It is the most eloquent testimony to the strength of nature that you can imagine,” she said.

Freshkills will be open to the public for one day on Sunday, September 29. Visit the park’s website for details.