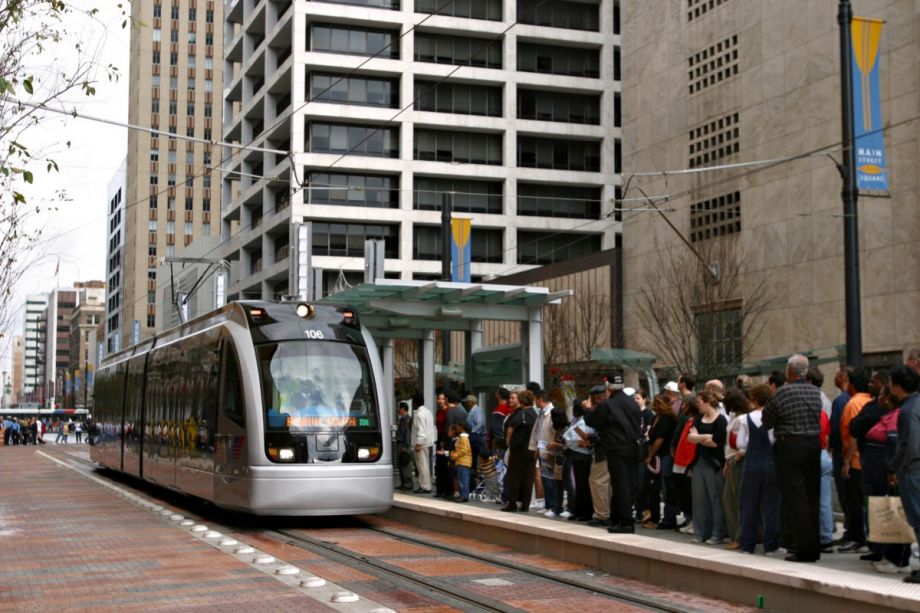 Houston’s light-rail gets all the press, but the city’s bus system is getting an attention-worthy redesign. (AP Photo/Michael Stravato)

Houston Gets a New Bus Network

Houston’s proliferating light-rail network gets all the press, but Texas’s largest city is still overwhelmingly a bus town, with more than 80 percent of transit trips made by bus, not rail.

And now, the city’s buses are getting a little bit of love. As we reported earlier this year, the Metropolitan Transit Authority of Harris County hired Jarrett Walker’s consultancy to remake the city’s bus network, with more resources devoted to the most well-traveled routes.

Currently, a bit more than half of the agency’s resources are devoted to routes with high ridership, with the remainder covering every bit of the city imaginable, with much less utility. After the plan is implemented, 80 percent of resources — this is all being done within the existing budget — will go to “ridership” routes, with just 20 percent spent on so-called “coverage” buses.

The effect of the redesign will be pretty incredible. The network of bus routes with service every 15 minutes, seven days a week — the minimum service necessary for “show up and go” service, whereby people don’t need to check their watch before they head out to the bus stop — is set to explode. Today, only about one-quarter of riders can walk to a bus stop with frequent service; after the map and schedules are remade, that will jump to 72 percent. With more useful service within the existing budget, ridership is expected to increase 20 percent within two years of implementation, the Metro board projected last year.

Right now, the Gulfton neighborhood — the densest in the city and the heart of Hispanic Houston — only has a single bus route with all-day headways of 15 minutes or less. After the reorganization, it will have four. And the city’s polycentric nature will finally get the bus network it deserves. Pre-bus reform, there wasn’t a single high-frequency route that didn’t hit downtown Houston. After the reforms are implemented, there will be six north-south routes west of downtown alone.

Jarrett Walker explains the reorganization here, while Metro explains it here. Metro’s board will hear comments on the plan through the spring, and intends to vote on it in the summer, with changes rolled out gradually over the next year or two.

Three years ago, Hong Kong’s MTR Corp., which runs the city-state’s transit system and a number of other railways abroad, announced that it was hiring Jay Walder, the head of New York City’s MTA. Last week, he said he will step down after his contract ends in 2014, following a controversy related to cost overruns and delays on a high-speed rail link to the mainland.

MTR claims the overruns and Walder not renewing his contract are unrelated, and Walder himself says he’s leaving for family reasons. But some Hong Kong lawmakers are so furious with him that they’re criticizing the government for not firing him immediately.

Work on the Hong Kong segment of the line, which will provide regional rail service between Hong Kong and the mainland cities of Shenzhen and Guangzhou and high-speed rail service beyond, was was scheduled to be completed in 2015, but will not finish until the year after and open for service in 2017. Walder and Hong Kong’s transportation secretary are under fire for allegedly stalling in telling the government about the difficulties.

By New York standards, this is actually on time and on budget (the MTR says the extra cost won’t exceed the contingency already set aside), which raises the question: If Hong Kong is so picky about the executive of projects, why did they hire a New Yorker in the first place? New York City has the highest tunneling costs on earth, and every large project underway during Walder’s time as the head of the MTA saw delays and overruns.

In the United States, jurisdictional fragmentation — with regions divided into separate counties and states, with their own separate transit authorities — is often cited as an obstacle to effective regional rail.

In Europe, on the other hand, railway operators are willing and eager to cooperate even across international boundaries.

The continent already has many international regional rail services (including one that will take you from Nice, in France, through Monaco on to the Italian town of Ventimiglia), and now it’s getting another: Starting in December 2017, there will be cross-border regional rail service between Bielefeld and Osnabrück in Germany and Hengelo in the Netherlands.

The new service on existing track, currently only served by inter-city service every two hours on the way from Amsterdam to Berlin, will be relatively small-scale, only costing 2.55 million euros a year to operate. The dizzying array of entities involved — “Westphalia-Lippe Local Transport Association, Lower Saxony Regional Transport, and the public authorities of the Dutch province of Overijssel and the Twente region” — should be a reminder to Americans that interstate commuter rail services are no excuse for poor coordination.