The Transit Legacy of Frank Lautenberg – Next City

The Transit Legacy of Frank Lautenberg 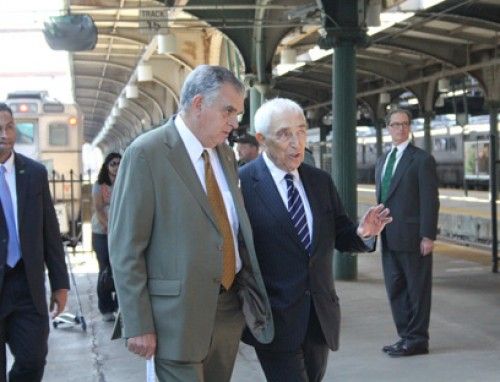 Frank Lautenberg, the five-term U.S. senator from New Jersey who died on Monday, has been remembered over the past two days as an astute businessman, an advocate of liberal causes and the last World War II veteran to serve in the Senate. He was also staunch supporter of public transportation. A number of obituaries so far have focused on Lautenberg’s most recent efforts on the public transit front, especially his scuffle with New Jersey Gov. Chris Christie over federal funding for a commuter rail tunnel that would have connected Secaucus Junction to New York City.

But throughout his career, Lautenberg has been a perennial advocate for public transit — something all the more impressive in his early Senate days, when using federal dollars to fund passenger trains wasn’t exactly in vogue. Below we have a summary of some of Lautenberg’s major public transportation achievements.

One of Lautenberg’s most defining stances was his long-running support for Amtrak against calls for cuts in service and privatization. When Lautenberg was first elected in 1982, Washington was awash in Reagan-inspired calls for privatization and reduction in government subsidies, with Amtrak held up as the prime example of government waste and interference. Despite Amtrak’s unpopularity during his first term, Lautenberg argued that the national rail service was a necessary investment for the country’s transportation future. His fondness for such “big-government programs” cost him political support and was cited in a 1987 New York Times article as a reason for his vulnerability in the 1988 election.

After the Reagan era passed, Lautenberg continued pushing for investment in Amtrak. In 1995 he and other Northeast senators won a key victory toward the construction of high-speed rail between Washington and Boston by securing $1.7 billion to electrify a section of track in New England. Three years later Lautenberg successfully led a group of six Northeast senators against former President Bill Clinton’s proposal to cut subsidies for Amtrak.

By the 2000s, the Amtrak investments that Lautenberg had supported began to pay off. In 2006 the Times reported that the long-derided Acela high speed train had begun seeing an increase in ridership and had become profitable in certain areas. A 2012 Times story about rising market share of Amtrak trains in the Northeast over commuter planes appeared to confirm Lautenberg’s long-held belief that Amtrak could provide superior service if allotted the proper funding. Even Congress, which had long been hostile to Amtrak, appeared to have come around to Lautenberg’s attitude about rail travel and supported his increase in the Amtrak subsidy from $1.2 billion to $1.9 billion in 2007.

Lautenberg’s last connection to transportation had been his highly publicized fight with Christie over the Access to the Region’s Core (ARC) tunnel. Lautenberg had spent years in the senate lining up federal funding and negotiating with the state of New York and the New York-New Jersey Port Authority for the proposed $9.8 billion tunnel, which would provide another route under the Hudson for New Jersey Transit and reduce the delays at the oftentimes-congested crossing. In 2010 potential cost overruns and an aversion to increasing tolls and gas taxes caused Christie to cancel the tunnel, much to the frustration of the various parties involved.

The elimination of the project brought about a series accusations and arguments between the governors of New York and New Jersey, the Department of Transportation and Lautenberg. In fact, much of Lautenberg’s final years in office seem to have been spent defending the tunnel against Christie’s (eventually successful) attempts to cancel it. Lautenberg even launched his own investigation into Christie’s motive for the canceling the ARC.

However, Lautenberg’s support for another trans-Hudson tunnel was not completely in vain. By advocating for solutions to transportation delays on the New York-New Jersey border, Lautenberg established a dialogue on the need for more rail under the Hudson. In the wake the ARC’s cancellation, other rail connections from New Jersey to New York have been proposed, including extending the No. 7 subway line into New Jersey and Amtrak’s proposed “Gateway Project,” consisting of the “construction of two new rail tunnels under the Hudson River and an expansion of New York Penn Station.”

While the 21 drinking age is a contentious and often derided law — especially on college campuses, where its seemingly arbitrary age and uneven application win it few friends — Lautenberg’s fight for a national drinking age was more about creating consistency than paternal big government. Prior to passage of the 1984 National Drinking Age Act, championed by Lautenberg, the country had an erratic patchwork of drinking age laws, with 27 states having some sort of minimum drinking age under 21 years of age. The inconsistency inspired so-called “blood borders” where young people would drink in states with lower age limits and then drive home, causing predictably tragic results.

The legislation does not actually outlaw drinking under 21 years at the federal level, as the feds do not have jurisdiction over drinking age. Instead it withholds 10 percent of federal highway money to any state that does not set its minimum drinking age to 21. As no state would refuse that money, this strong-arm effect has succeeded in creating a uniform national drinking age.

While Lautenberg was instrumental in protecting America’s national passenger rail system as it lost riders and revenue in the 1980s and sustaining New Jersey’s public transit network throughout his five terms in the senate, he also leaves behind a legacy as a visionary politician in comprehending America’s complicated transportation needs.

In 2010 Lautenberg steered $450 million in federal money toward the Garden State to upgrade rail lines in central New Jersey, allowing Amtrak’s high-speed rail, Acela, to reach new speeds of 165 miles per hour. The money was some of the last that Lautenberg had secured to upgrade Amtrak, but it fit into his and Amtrak’s long term-goal of creating a rail line that could transport people from Washington to Boston faster, cheaper and more efficiently than any other form of transportation.