France Takes a Rightward Turn, with Trams in the Crosshairs – Next City

France Takes a Rightward Turn, with Trams in the Crosshairs 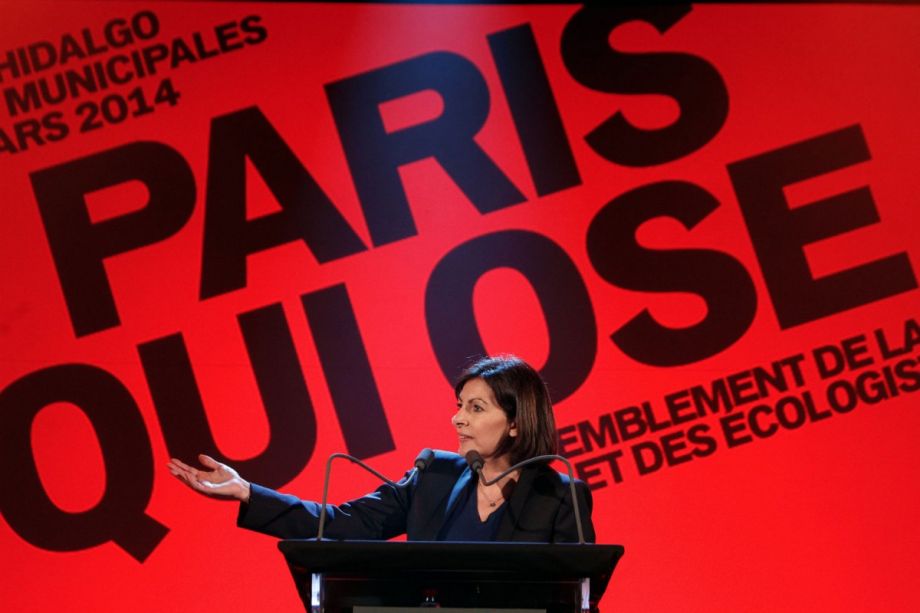 Socialist Anne Hidalgo will become the next mayor of Paris, but much of the rest of France saw right-wing victories this week. Credit: AP Photo/Thibault Camus

Cities and towns across France held their second round of municipal elections on Sunday, with voters asked to choose between the top two candidates from local races held last week that didn’t result in a majority for any particular candidate or party. The overall narrative was one of a rising right wing: The center-right Union for a Popular Movement (UMP) won the most votes throughout the country, and the ultra-right National Front — known for its anti-immigrant views, but also for favoring a protectionist economy — had its best election ever.

In Paris, the center-left Socialist Party retained control of city hall, albeit after an unexpected first-round victory by the UMP’s Nathalie Kosciusko-Morizet. Anne Hidalgo, a Spanish-born Socialist politician, will become mayor of Paris on Saturday, the first woman to hold the position. She will, however, have to govern alongside the Ecologists (whose full party name, Europe Ecology — The Greens, rolls right off the tongue) and Communists, with her party not attaining an absolute majority in the Council of Paris.

The coalition municipal government in Paris has ramifications for the city’s transportation policy. Rumors have it that Christophe Najdovski, who campaigned for mayor against Hidalgo under the Ecologists’ banner, will become her transportation deputy. (The hard-left Communists’ Ian Brossat will likely take up the housing portfolio.)

During the campaign, Hidalgo supported a number of Métro expansions within Paris, although she herself wasn’t always sure which lines she supported. Then there was Scootlib’, Hidalgo’s idea for a motorized scooter sharing program modeled on the very successful Velib’ bike share and Autolib’ car share programs. The somewhat whacky idea — dubbed by a member of Hidalgo’s campaign as a “Copernican Revolution in urban mobility” — fell by the wayside when the Socialists and their municipal governing partners, the Ecologists, harmonized their transportation plans.

Najdovski and the Ecologists’ main transportation proposal, a tramway along the River Seine, may yet survive. While trams, with their lower capacity than grade-separated metros that travel above or below city traffic, are normally reserved for outlying areas of the capital or smaller cities, Najdovski envisioned an 18-kilometer (11-mile) tramway on the right bank of the Seine, along with a network of bike and pedestrian paths and a “Central Park.”

Outside Paris, however, the fate of the tram was more grim. In Toulouse, the great tram-versus-metro battle, most famously fought in the French city of Strasbourg in 1989, saw a rematch, this time with different results. In both cities, the Socialist candidates wanted to build a tramway, while the centrist and center-right candidates wanted a more expensive metro that did not disrupt automobile traffic on the surface. (Canadians will recognize the debate. Toronto Mayor Rob Ford, representing the conservative “Ford Nation,” has been a vocal advocate of subways, while other more left-leaning politicians have advocated for cheaper light rail on the surface.)

In Strasbourg in 1989, the Socialists and their trams won the day. But on Sunday in Toulouse, UMP candidate Jean-Luc Moudenc won the run-off election. During the campaign, Moudenc said that incumbent Socialist mayor Pierre Cohen “wants to chase drivers out of the city.” While Moudenc claims that the metro, the city’s third, will cost 1.7 billion euros, Cohen’s campaign pegged the ultimate cost at 2.2 billion euros — an unaffordable sum for Toulouse’s transit agency.

Trams elsewhere haven’t fared much better during the latest round of elections. “An object of desire through the beginning of the 2000s,” blogged Le Monde’s transportation reporter, “this small urban train, on which so many mayors have staked their reputations as builders, is now jinxed.”

In Amiens, a city of 135,000, the Socialist candidate axed his tramway plan, but it wasn’t enough to salvage his campaign — the election went to a tramway opponent from a small centrist party. In Avignon, the new Socialist mayor promised to put a controversial tram proposal up to a citywide referendum (the National Front candidate who won the most votes in the first round stridently opposed the outgoing UMP mayor’s tram project).

In Aubagne, the city’s Communist mayor won’t be around in September to see the three-kilometer first phase of his tram network open — it will mark the first time in nearly half a century that the city won’t have a mayor from the Communist Party — and his idea that public transportation should be free might not survive into the next administration. The city of Caen was planning on replacing its rubber-tire tram with a traditional one on rails, but no longer: The new UMP mayor says the city doesn’t have the financial means to go through with the plan.

But the tram’s loss may be bus rapid transit’s gain. BRT — called bus à haut niveau de service in French, or BHNS — is the mode of choice for Avignon’s new mayor, Cécile Helle. The Socialist wants a BRT line instead of a tramway, with the idea that a cheaper construction cost will make it easier to carry out her plan to make mass transit free within the city.