France Commits to Tramways, A Possible Model for the Future of Urban Rail – Next City

France Commits to Tramways, A Possible Model for the Future of Urban Rail 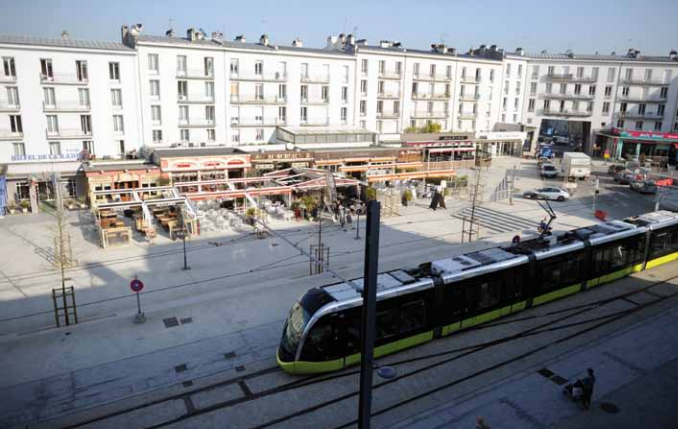 Across France, cities large and small have adopted the construction of modern tramways. Credit: Le Tram

Last weekend, the city of Brest, on the far western coast of France, opened its new tramway, a 14.3-kilometer line that connects the center city to the west and northeast. About 50,000 daily riders are expected in a city of about 140,000 inhabitants. This Friday, Orléans, an even smaller city in central France, will open its second, 11.3-kilometer tramway line. The first already attracts about 40,000 daily users.

These two cities are far from alone in France. Across the country, cities large and small have adopted the construction of modern tramways* to bring their citizens a modern form of public transportation that has led to improved circulation, more convenient networks and renovated downtowns. Like American streetcars, these tramways operate at the ground level, usually without grade separation from automobile traffic, making them relatively cheap to build. On the other hand, like American light rail, tramways operate within their own rights-of-way and they feature long trainsets that can carry the equivalent of four busloads or more — in other words, they actually improve transit capacity and performance.

The appeal of tramways is easy to understand. The electric vehicles are silent, modern-looking and entirely flat-floor. Their tracks can be nestled in a lawn, creating a grass median through which trains run; if done right, they can be used as a tool to restore the beauty of an urban boulevard, rather than deface it, as do some light rail lines traveling on grade-separated track. In some cities, like Nice, Bordeaux and Orléans, vehicles have been designed with batteries that allow them to travel some distance (such as across a historic square) without the need for overhead messenger wire. In virtually every case, tramways in France have been specifically located on major bus corridors in order to replace overcrowded routes with higher capacity services. 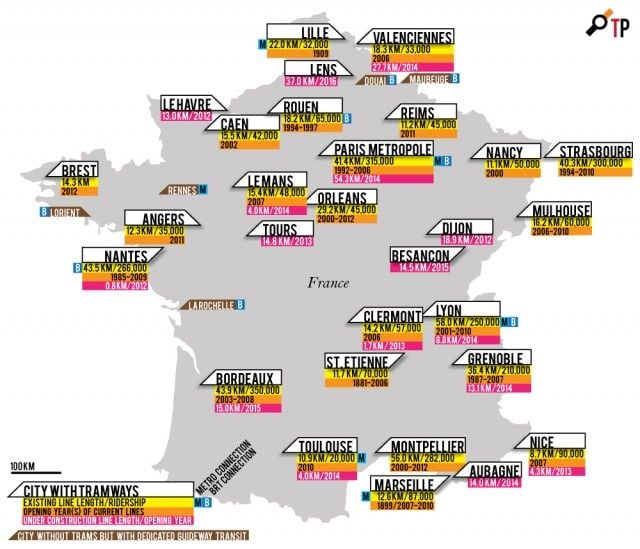 Over the past 12 years, the total route mileage of tramways systems in France has multiplied by five.

France is not alone in using trams, of course. Germany has dozens of such systems across the country, as do Switzerland, the Netherlands and others. But as of late, France’s cities have made an unparalleled investment in the mode. While France had virtually no historic tramways left by the 1980s outside of short routes in Marseille, Lille, and St. Etienne, by the end of this year 25 cities will have such networks and 29 will by 2016, as the map above shows. And most of this construction has occurred since 2000, with an increase from 124.7 kilometers nationwide to 624.1 kilometers (388 miles) by the end of this year, a 400 percent increase. In 2010, 2011, and 2012 alone, 160.2 kilometers will have been built.

As shown in the chart below, seven cities account for about half of all tramway route kilometers in the country. Lyon and Montpellier have expanded most quickly, each adding more than 56 km since 2000, with Bordeaux and the Paris region adding 40 km each in the same period. Paris and its suburbs will add another 54.3 km to the network by 2014. 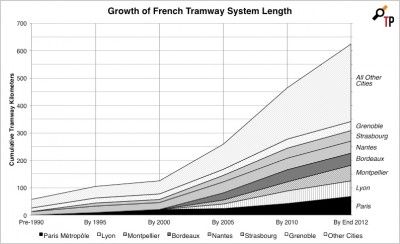 In France as a whole, these tramways currently carry about 2.8 million riders a day, compared to about 1.6 million daily riders on all U.S. light rail and streetcar systems. These riders appear to be attracted to trams above and beyond what had previously been offered through bus service. In Lyon, four tram lines opened since 2000 have brought in a considerable numbers of users; the rail system attracted 58 million riders in 2010. But the city’s transit network as a whole grew by 86 million riders between 2000 and 2010 (an increase of 30 percent), meaning that the new trams were not simply moving people from buses into trains. In other words, the investment in rail appears to be paying off in terms of moving people into public transportation who used to be using some other mode of travel. That, again, is not a surprise: It is not only enjoyable to travel by tramway, but such service is also usually faster and more comfortable than equivalent bus service.

The focus in France has been on urban tramway networks, especially compared to the previously fashionable automated metro networks. Though those systems — built using VAL technology in Toulouse, Lille and Rennes — were seen as the future of French rail systems in the 1980s, their high construction costs, caused by the complete grade separations they require, makes them less them adaptable to the needs of less populous urban areas that may be able to instead afford a tramway line. Indeed, this is the point: Through the widespread use of tramways, France is providing new urban rail systems to dozens of cities that, in another context, would not be able to afford the costs of trains. In the process, cities across the country are experiencing significantly improved transit that is attracting more and more riders.

Trams are not always cheap; the Brest line, for instance, cost about 40 million euro per mile to build, or $50 million per mile. Some cities, like Besançon in eastern France, have been able to limit costs to about $35 million per mile. Even that may be more than one might hope for steel implanted in concrete.

But in the American context, those costs come across as reasonable. The U.S. Department of Transportation revealed its latest TIGER discretionary grants last week. The one streetcar project that got the nod was the Wave in Fort Lauderdale, which will cost $83.2 million (of which the federal government will pay $18 million) for 1.4 miles of track — that’s $59 million per mile. In exchange, the Florida city will get a rail line that attracts an estimated 2,800 riders a day, thanks mostly to the short, tourist-oriented route where virtually no bus ridership currently exists. The streetcar will have to share its right-of-way with cars and the vehicles themselves will be around 66 feet long, just a bit longer than an articulated bus. Stations are likely to be slightly improved bus shelters.

The other streetcar systems currently being built in the U.S. have all the same limitations — and many of them are very expensive, too: Cincinnati’s line will cost $50 million per mile to build, Seattle’s $53 million per mile and Atlanta’s $72 million per mile. At these costs, American cities should be pushing for their streetcars to work a bit more like French tramways.

Or even French buses. In Metz, in eastern France, the city is investing in a very innovative bus system called Mettis that is currently under construction and expected to open in September next year at a cost of €170 million for 17.8 kilometers of service — or about $19 million per mile. That would be expensive for a bus line if the system was bus rapid transit in the non-rapid form BRT too often takes. But Mettis will be a new breed, so much like a tramway that it will be hard to differentiate its vehicles and alignment from that of a rail service.

Mettis’ two lines will use 79-foot hybrid buses (quite a bit longer than an American streetcar) specially constructed by Van Hool. They will feature four large doors and provide complete low-floor service to the platforms being planned for the large stations, as rendered above. The system is being built to accommodate future electrification through energy transfer at stops, though that technology is not yet fully developed.

Eighty-six percent of the Mettis corridor will operate within its own right-of-way and vehicles will get transit signal priority. Certain journeys are expected to see reduced travel times of about 40 percent. No wonder 36,000 riders are eventually expected to use the service daily.

We could take these examples of successful French investments in modern transit systems to lament the high costs and limited utility of too many American rail and even bus rapid transit projects (Maryland has been discussing spending upwards of $60 million a mile on a BRT line). But there are more positive lessons to learn. If we are planning to spend tens of millions of dollars on a new rail line, is it too much to ask that it be placed in its own right-of-way and be given high quality amenities? Is it reasonable to suggest that an investment in a 1.5-mile line is simply not long enough in itself to actually attract a significant number of commuters? Are there ways to make bus services as appealing as rail lines, at a lower price?

* Note that in this post, I have defined trams on tire as tramways. (These are located in Caen, Clermont, Nancy, and, by the end of this year, outside of Paris). This does not include significantly improved bus systems, such as Metz’s, but does include systems with electric catenary and a fixed guideway.