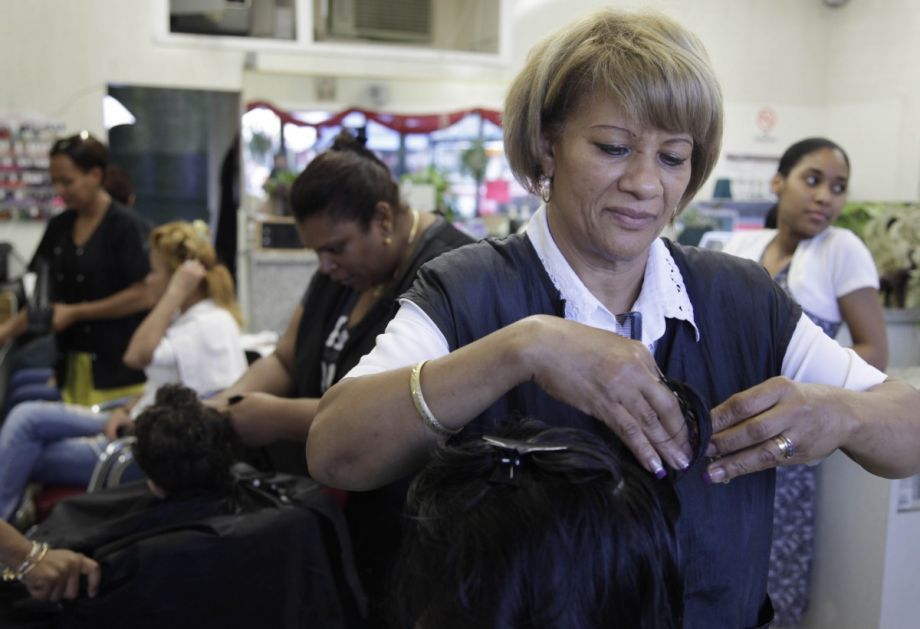 Milagros Rodriguez works with a customer at her salon, the Woodside Beauty Salon in Queens. Many businesses in Queens are still recovering from Sandy.  (AP Photo/Seth Wenig)

When Hurricane Sandy hit the East Coast on October 29, 2012, it left an impact on New York City’s economy that will linger on into the next decade. Its legacy: $19 billion dollars worth of damage and over 23,000 businesses affected — 95 percent of which were small- to medium-sized with 50 or less employees, but when lumped together were giving paychecks to nearly 245,000 people.

The city responded with a surfeit of recovery programs, and four years later, its Department of Small Business Services is about to launch another one. It’s a new series of disaster readiness grants being rolled out through its initiative — a sum of $1.77 million that New York’s local economies will receive to make sure that the next time a storm hits the nail salon or corner store down the block is ready.

Designed to help small businesses buy emergency equipment like flood barriers, tech support to back up business files through cloud computing, and electricity generators, Business PREP will provide grants up to $3,000 and consulting support from SBS. Through visits with SBS staff, owners will build disaster readiness and business continuity plans tailored specifically to their location, size and needs.

Helping these small businesses thrive is essential for the city’s economic endurance as a whole. More than 90 percent of all businesses in the New York metropolitan area have fewer than 20 employees, according to a 2014 report by Center for an Urban Future. Yet unlike chains that can call up corporate support systems in times of emergency, these independent operators are on their own when a crisis like Sandy comes along.

“Small businesses are a vital part of the city’s economy and face unique challenges from climate change, which is why the city is committed to helping them become more resilient,” said Daniel Zarrilli, senior director of climate policy and programs for the city in a published statement. “By helping to build more resilient small businesses, we also strengthen neighborhoods as a key component of the city’s OneNYC program,” which aims to bring 800,000 people out of poverty and preclude the chance of displacement in the wake of another Sandy-sized event.

If you run a small bakery, for example, Business PREP grants could mean an extra generator that saves you hundreds or even thousands of dollars worth of baked goods and baking products that need to be refrigerated during a long-term blackout.

And technical assistance could help that owner store all of their business records online instead of in a basement, where storm floods could render them illegible. That’s something that SBS staff saw time and time again as they tried to collect information from businesses that were severely hit by Sandy, as they prepared to petition the U.S. Department of Housing and Urban Development for disaster recovery funds.

HUD funding eventually allowed the city to give $55.2 million worth of loans and grants between 2012 and 2013 to around 350 businesses whose operations were devastated by the storm.

The Business PREP grants add to that support system, called the Hurricane Sandy Business Loan and Grant Program (HSBLGP), and another earlier initiative called RISE:NYC that split $30 million between 11 major technology projects to shield small businesses from future natural disasters. Those works included floodgate technologies, solar panel projects to keep businesses powered without having to be on the grid, and WiFi systems that get their connection from a series of networked routers instead of having to be directly plugged into an internet port.

But even with major funding going to these projects, the city knew it had to reassess its own approach to disaster readiness training for business communities. Funding was necessary, but ultimately reactive. As they spoke with small business owners over the past few years, SBS staff recognized it had some major gaps to fill in when it came to the little things — like maintaining accurate business records day-to-day, which is vital in case there’s ever the need to file an insurance claim for the business or property. They launched the first arm of Business PREP in December 2015 as a series of free educational programs, hosting seminars and events about disaster readiness training at local business institutions throughout the city, like the Southwest Brooklyn Industrial Development Corporation which serves businesses in waterfront neighborhoods like Sunset Park and Red Hook. It’s still running today.

But it’s not limited to those areas, and the SBS’ hope is that through this extra tier of Sandy recovery initiatives, it’ll help leave an impact that lasts even longer than Sandy’s. Of the 350 businesses that received grants during the HSBLGP program, the 261 that reported employee numbers showed these businesses were providing a lifeline to more than 3,445 people. (Not all grant applicants were required to submit employee numbers.) Extending this prep effort into the small business community, says SBS Commissioner Gregg Bishop, will preclude not only the impact these events have on New York’s economy as a whole, but the people who depend on local brick-and-mortars to provide for their families.

“Small businesses anchor our neighborhoods and employ millions of New Yorkers,” says Bishop. “We want to connect them with the tools they need to succeed.”