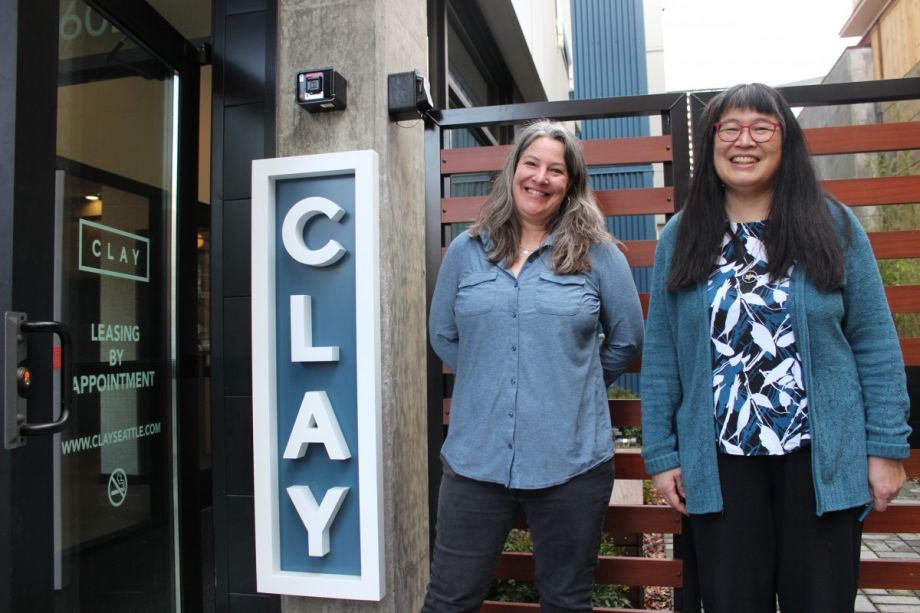 Laurie Olson, Seattle Office of Housing (left) and Sharon Lee, Executive Director of Low Income Housing Institute, in front of The Clay, which was built for market-rate tenants but will become permanent supportive housing after being purchased by LIHI. (Photo by Greg Scruggs)

TV news cameras, Rotarians, and local officials clustered on the sidewalk outside the Clay Apartments in Seattle’s Capitol Hill neighborhood on Tuesday for a ribbon-cutting ceremony. The unveiling of the sleek, new building with modern design touches like a poured concrete exterior and subway tile spelling “CLAY” at the foot of the elevator normally would not have raised eyebrows in Seattle, which remains the crane capital of the U.S. even amidst the COVID-19 pandemic.

Developers cranked out projects like the Clay, home to 76 so-called “small efficiency dwelling units,” or SEDUs, that top out at 330 square feet, in response to Seattle’s red-hot real estate market. But as those buildings fling open their doors, some are finding that the expected tenants aren’t there. Capitol Hill is a prime location walking distance from Amazon’s headquarters, a plethora of other tech jobs, bars and restaurants galore, and a light rail station that offers easy access to the rest of the city. Those selling points are on hiatus during the pandemic and rental vacancies have soared as a result, which prompted the Clay’s owner to reach out to city officials in October with an offer to sell.

Seattle-based affordable housing not-for-profit Low Income Housing Institute (LIHI), which predominantly serves people experiencing homelessness, stepped in to buy the Clay and put together $18.2 million in financing from the city, state, and the National Equity Fund. The building’s new occupants are also benefiting from 50 Section 8 vouchers and VA support for 20 homeless veterans. The deal closed on Friday.

“Our critical funders came together quickly and put together the financing so that we could buy the building right away and move people in,” said LIHI executive director Sharon Lee.

The tenants, who earn 30-40% of area median income, will pay 30% of their income toward rent. LIHI will provide an on-site case manager and 24/7 security. A ground-floor retail space originally set to become a watering hole — the site was previously home to a beloved dive bar — will instead become a community room with a computer lab, library, and communal kitchen.

Nearly 12,000 people were experiencing homelessness in King County, the jurisdiction that includes Seattle, in 2020 according to the most recent point-in-time count, which was conducted before the pandemic reduced capacity at area shelters and led to a visible uptick in tent encampments.

“This is the permanent housing solution that we need more of,” said Lee. “It’s not magic science. We know how people can live with dignity in a warm, heated, affordable place.”

Buying the Clay worked out to $240,000 per unit and acquisition took six months from identifying the potential sale to closing the deal. Moreover, Clay’s high-end fixtures and amenities designed to attract market-rate rents — the median rent on a Seattle studio was $1,400 per month before the pandemic — are far more luxurious than what conventional permanent supportive housing production can normally provide.

“We have never had a building with in-unit washer, dryer, dishwasher, and convection ovens for permanent supportive housing,” Lee said during a tour of the building, where model units were furnished for occupancy with donations from local Rotary Clubs. The turnkey property is fully decorated with fresh paint, hallway artwork, stylish lighting, and a fully stocked bookcase organized by color. The entire building is pre-wired for internet access, another rare perk.

“They say housing takes too long. The Clay proves otherwise,” said Seattle Office of Housing Director Emily Alvarado. “If we’re more creative about permanent housing solutions now, we can provide the permanent solution to homelessness faster than we ever imagined.”

The real estate development pipeline set projects in motion years ago that are slated to come online since the pandemic altered market fundamentals. Over 2,000 SEDUs and other microhousing units have received permits in Seattle since 2018. Office of Housing Capital Investment Manager Laurie Olson believes a reckoning is underway and more market-rate properties could potentially become ripe for purchase to put them in public hands.

“Construction loans are coming due,” Olson said. While she admits the Clay deal was exceptional due to a real estate developer with a certificate of occupancy in hand reaching out to her office just as LIHI had newfound access to a public subsidy, she estimates that upwards of 40 apartment buildings under construction might be interested in selling. Lee, for her part, is analyzing four possible deals at the moment.

Seattle may be alone in this new dynamic, however. Citing a recent conversation with colleagues in Boston, Olson said, “Our peers in other high-cost cities are not seeing similar opportunities.”

Real estate analysts also expect less of a widespread sell-off as Washington state advances in its reopening. As of Monday, bars, restaurants, and retail are allowed 50% indoor capacity, live entertainment is starting back up with the first major concert in Seattle this weekend, and Microsoft announced that it is welcoming employees back to the office.

“SEDUs have been hit over the last 12 months but we are very bullish on SEDUs over the mid-term because affordable price points are crucial in Seattle,” said Chris Fiori, principal and project director for Seattle-based real estate advisory Heartland. “LIHI took advantage of some near-term market dynamics, but that is more of an aberration than something over the long term.”

The possibility that Seattle’s real estate market will bounce back quickly is squarely on Alvarado’s mind. “This was a really special opportunity but given the current real estate market, we think that there are more opportunities now than there have been before and we think that window will close,” she said. “Now is the time to be seeking opportunities for acquisition where we can move quickly on affordable housing delivery.”

How many more deals might get accomplished during the lingering impacts of the pandemic recession and public health restrictions on Seattle’s real estate market is an open question. But for Stephen LeBerth, a formerly homeless veteran now working in construction who described his journey from a tent encampment to a tiny house village to an apartment at the Clay during the ribbon-cutting ceremony, his future is much more certain.

“Excuse me, I have to get back to work,” he told the crowd. “But I did see my apartment — it’s gorgeous.”