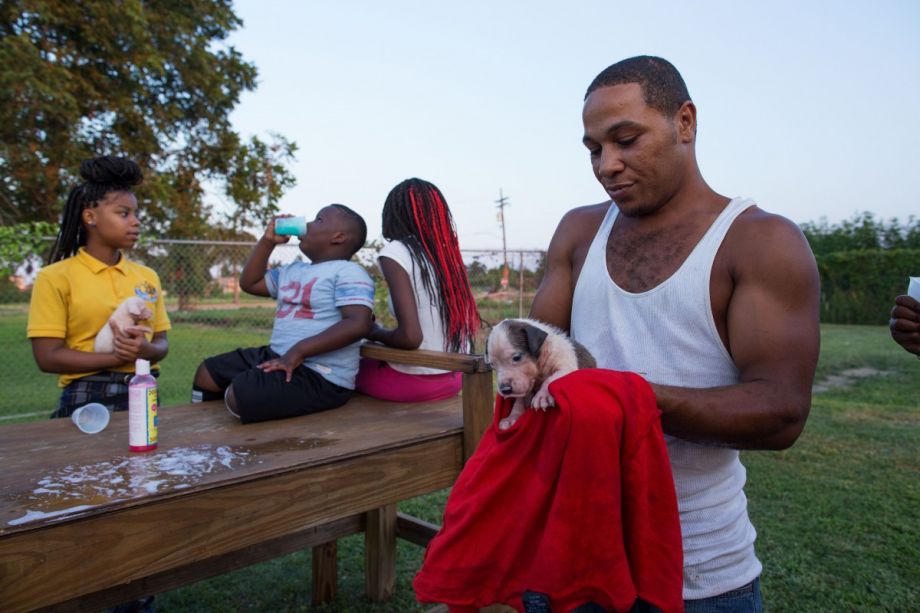 Eric Patterson, 28, dries off a pit bull puppy that he washed while supervising neighborhood kids at the Running Bear Boxing Club in New Orleans​, run by a Lower 9th Ward resident to keep kids out of trouble in the neighborhood. (AP Photo/Max Becherer)

Who saved New Orleans from a post-Katrina demise?

It’s an unanswered question that pivots on how you define leadership. In virtually every institution, there are advocates for strong top-down strategies on one side, and robust bottom-up models on the other. But when management systems are truly humming, both sides usually come together in the middle. Nowhere is this merger more urgent, more demanding—and more revealing—than in the wake of a major disaster.

In New Orleans, it wasn’t long after hurricane Katrina’s floodwaters had receded that the city’s top-down superheroes were staking out self-determined roles in the city’s recovery and restoration. First up was then-mayor Ray Nagin (now a federal prisoner), whose ill advised and racially divisive recovery plan, championed by a white real estate mogul and Texas Ranger Republican named Joseph Canizaro, came to an abrupt halt when a room full of courageous 9th Ward residents stood up in the ballroom of the Sheraton Hotel and shut it down.

The mostly black City Council’s substitute solution ended in a similar standoff, this time with the Louisiana Recovery Authority, because the Council plan had been cleverly crafted to bypass most of the city’s white neighborhoods.

A third plan—the one ultimately adopted—was funded and facilitated by philanthropies coordinated by the Greater New Orleans Foundation, a community foundation. Called the Unified New Orleans Plan (UNOP), the process involved more than 50 neighborhood meetings and three massive citywide meetings, complete with two-way broadcast video connections linking residents of New Orleans with hundreds of displaced citizens in Baton Rouge, Dallas, Houston and Atlanta. In all, more than 9,000 people participated in creating what many would call the “people’s plan” for the city’s recovery.

These citizen planners would continue to marshall community visions forward and today, 10 years later, many remain deeply engaged in the day-to-day work of keeping a community healthy. One of them, LaToya Cantrell, went from being an outspoken neighborhood resident to leading a civic group to, finally, in 2012, beating another citizen activist in a heated election to become her district’s City Council representative. In April, a Politico headline asked if she could be the city’s next mayor. ( Read essays from other community leaders in this week’s feature, 10 New Orleanians on How Katrina Changed Their City)

Across the city and in virtually every sphere of public life, citizens like Cantrell stepped up with a vision for how to move New Orleans forward. A friend of mine, Jane Wholey, started an organization, Kids Rethink New Orleans Schools, engage student voices in the citywide conversation about school reform and the city’s recovery. The “Rethinkers,” as they’re called, have tackled everything from school design to cafeteria menus, pushing schools to serve locally grown foods and incorporate sustainable design principles in new buildings.

They even lobbied successfully to replace “sporks” with spoons and forks because, as they pointed out to Paul Vallas, then the superintendent of the Recovery School District, “in New Orleans it is important to learn how to eat properly.”

“If you ask a hundred people to answer a question or solve a problem, the average answer will often be at least as good as the answer of the smartest member.”

Another New Orleanian, Andrea Chen, a former public school teacher with no prior experience in business, started another nonprofit called Propeller that has birthed more than 60 ventures in social entrepreneurship.

We’re taught from an early age that when things get tough, we need to look for experts to come to our rescue, because the cost of failure is so high. But after studying expert forecasts and analyses in a wide variety of fields, Wharton professor J. Scott Armstrong says, “I could find no studies that showed an important advantage for expertise.” And in his book, The Wisdom of Crowds, James Suroweicki notes that if you ask a hundred people to answer a question or solve a problem, the average answer will often be at least as good as the answer of the smartest member. “With most things,” he writes, “the average is mediocrity. With decision-making, it’s often excellence. You could say it’s as if we’ve been programmed to be collectively smart.”

Scott Page, a political scientist at the University of Michigan, has found through studies of computer-simulated problem solving that a group made up of some smart agents and some not-so-smart agents almost always did better than a group made up just of smart agents. He speculates that solely “smart” groupings don’t work that well because the smart people tend to resemble each other in what they can do. As the legendary organizational theorist James G. March put it: “The development of knowledge may depend on maintaining an influx of the naïve and the ignorant. … Competitive victory does not reliably go to the properly educated.”

But how could this play out in the chaos of a major disaster? In her book Paradise Built in Hell , Solnit draws upon data from five major disasters to empirically refute the conventional belief that disasters lead terrified, passive victims toward chaos and dependency. Instead, she writes, “neighborhood societies of cooperation and mutual aid arise precisely when official institutions of sovereign authority have broken down.” The greatest post-disaster threats to human security and welfare come not from “anarchy” or even “looting” but from the panicked, militarized overreaction of elites who fear a loss of power and control.

So who saved New Orleans? Was it the elected leadership? (Nagin, by the way, is not the only one now in prison.) Was it the crowd? Or was it both? And how might these lessons apply to the old normal back-biting, top-down government-led expert decision making at the state and national levels? As world powers go, America is still a fledgling institution—an early work in progress, you might say. Our Bill of Rights and Constitution are grounded in democratic ideals. Some would say that these ideals are unrealistic and impractical. But new research and insight undermines the old saw about a camel being a horse designed by a committee. It’s time to resurrect our faith in a system of governance that is truly “of the people, by the people and for the people” and cities like New Orleans are the proving ground.

Steven Bingler is the founder of concordia, a planning and architectural design practice headquartered in New Orleans. In December, he co-authored, with Martin Pedersen, an Op-Ed for the New York Times calling for greater inclusion and design equity, and is currently building a community centered planning and design website commonedge.org that will launch in the fall.