Forefront Excerpt: Where No One Thought Gentrification Would Go – Next City

Forefront Excerpt: Where No One Thought Gentrification Would Go 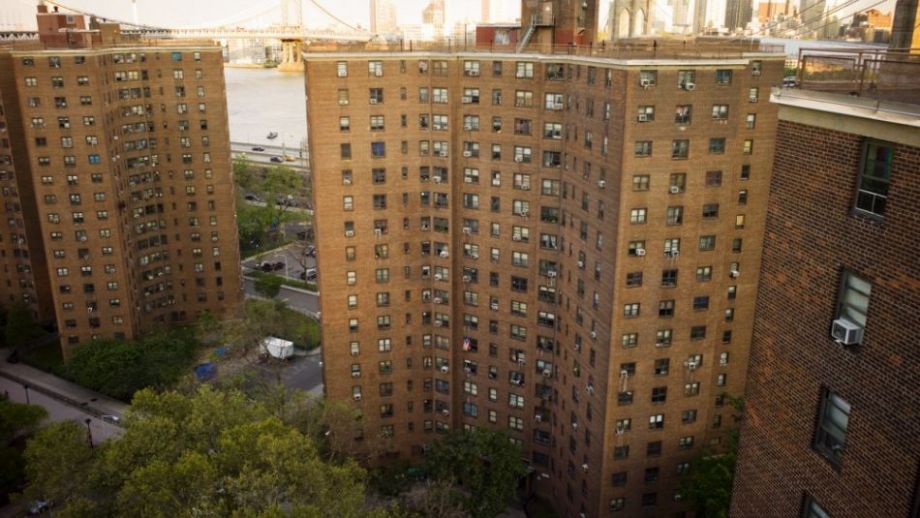 In February, the New York City Housing Authority announced a plan to lease space in the footprint of eight Manhattan housing projects to real estate developers. The squeeze of gentrification, not to mention the failures of the towers-in-the-park design model for public housing, has made NYCHA’s open space the next logical target for market-rate housing. Tenants, however, have fears ranging from ruined views to outright displacement. In Forefront this week, journalist Ben Adler sets out to examine the consequences of developing the projects and understand what the move could mean for affordable housing in New York.

The Alfred E. Smith Houses on Manhattan’s Lower East Side are not the squalid, frightening badlands you probably think of when you hear the phrase “housing project.” Sure, they follow the ungainly Corbusian model of towers-in-a-park. And if you venture onto the stairway in one of the apartment buildings, the stench of urine is overpowering. But the image you might have — of isolated high-rises surrounded by vast, empty swaths of concrete, with no one but menacing drug dealers sitting on broken benches — is not how the area feels.

Rather, the little patches of space created by the buildings’ odd angles are verdant, with healthy grass and trees providing shade. There are basketball courts that double as a baseball diamond. On the western border, facing the street, stores and a diner occupy the ground floors. Many of the residents are solidly middle class: Public housing tenants in New York are allowed to have incomes as high as $68,700 per year for a family of four. And given the city’s astronomical market-rate rents, many civil servants and blue-collar workers are happy to live here.

Walking around the Smith Houses on a weekday afternoon feels perfectly safe. The ample sunlight and open space makes it apparent just what those misguided mid-century architects were thinking when they designed projects like this all over the country. Even the demographics — largely black and Latino but, since it’s just east of Chinatown, a large Asian contingent as well — are unusually diverse. Perhaps most notable, since the Smith Houses sit right next to the East River, are the grand views of the Brooklyn Bridge, immediately to the south.

Those views will not remain for long. In February, the New York City Housing Authority (NYCHA) announced a plan to lease space in the footprint of eight Manhattan housing projects to real estate developers. The developers will put up market-rate housing, with 20 percent set aside as affordable. (Typically, New York buildings adopt this 80/20 split in exchange for participating in a state-financing program. In this case, it will be mandated.) Five of those projects are in Alphabet City or on the Lower East Side, including the Smith Houses, where the land being taken is a parking lot on the area’s eastern border. The new high-rises would thus block — or, some might say, steal — the views of some current residents.

The NYCHA infill plan is part of a radical experiment: Putting market-rate housing in the projects. For the last half-century, the word “projects” has become to many Americans almost a synonym for urban poverty and crime. The inherent unpleasantness and undesirability of being anywhere near them was considered self-evident. Richard Nixon and George Romney, his Housing and Urban Development (HUD) secretary, began the process of replacing federal programs to build low-income housing with voucher programs, a trend that has continued ever since.

But while other cities rethink public housing, New York has found itself constantly overwhelmed by a huge demand to live in its projects. (There are approximately 160,000 families on the waiting list.) Crime in New York has continued its extraordinary 20-year decline: In the first half of this year there were only 154 murders in New York and 417 in all of 2012, compared to a peak of 2,605 in 1990. No one thinks the projects are so dysfunctional or dangerous that they should be abandoned. The gap between demand and supply of housing in or near Manhattan — and the absence of fear of crime — has pushed gentrification into areas from Washington Heights to Bushwick that for so long had been invisible to the affluent. Well-heeled professionals now routinely spend millions of dollars on homes directly across the street from the projects. Moving in literally next door would seem to be the next logical step.

Meanwhile, aging buildings and declining investments at the federal and state level have left NYCHA with serious financial shortfalls, both near and long term. As City Limits reports, “The New York City Housing Authority is in dire financial straits, facing a yearly deficit of about $40 million in operating costs, as well as a $6.6 billion deficit in capital needs, such as repairs to roofs, elevators, heating and grounds. While residents pay 30 percent of their wages towards rent, the bulk of NYCHA’s funding comes from the government, which has radically scaled back its support of public housing: In 2001, capital funding was around $420 million, and 99 percent of NYCHA’s operating costs, but in 2011, it was down to only $270 million, and only 89 percent.”

In short, NYCHA needs money. The asset it has to sell or lease, thanks to that towers-in-a-park design, is excess land. Leasing these spaces is projected to generate $32 million per year, which would be invested in repairs. And so, according to Mayor Michael Bloomberg, NYCHA and their defenders, leasing land to private developers is a win-win. NYCHA and its residents get money for repairs and the city gets much-needed housing stock.

“As money from HUD and other agencies dries up, it’s more important than ever to think creatively about how to finance the needed improvements to public housing,” writes Majora Carter, founder of Sustainable South Bronx, an environmental and economic justice advocacy organization, in an email. “The real estate landscape has changed dramatically in American cities over the past 30-50 years, when much of this housing was built. At that time, no one could imagine the re-urbanization that is taking place all over, and especially in parts of New York City… Manhattan real estate is a resource.”

Even affordable housing advocates, not a group known for favoring private developers, are often cautiously supportive of the plan. “The move to lease higher value sites seems like a no-brainer,” says Rosanne Haggerty, president of Community Solutions, which provides social services to combat homelessness. “NYCHA needs resources to exist as a functioning agency that can pay its bills.”

New York also needs housing at every level, not just the lower-income end. As of June, the median rent in Manhattan was $3,195 per month, up 6.7 percent from the same time last year, and the vacancy rate is at a two-year low of 1.46 percent. “We’re in a housing crisis in New York City — and we have been for decades — in which vacancy rate for residential properties is extremely low,” says Matthew Dunbar, associate director for government relations and advocacy at Habitat for Humanity, New York City. “The underlying cause of unaffordability is the lack of vacant units. This proposal is targeted in Manhattan where the vacancy rate is lower than the other boroughs. There is very little land available for development, especially in Manhattan. Density and density bonusing is good from our perspective.”

So why are NYCHA residents unhappy about it? Well, there are the interrupted views. But plenty of people with no view are also protesting. Angry residents have flooded public hearings and complained to the City Council. At a City Council Committee on Public Housing hearing in April, the New York Times reported, “tenant-association presidents from at least four of the eight sites that have been selected for development expressed concerns about the plan — and in the case of Smith Houses, Meltzer Houses and Baruch Houses, outright rejected it.”