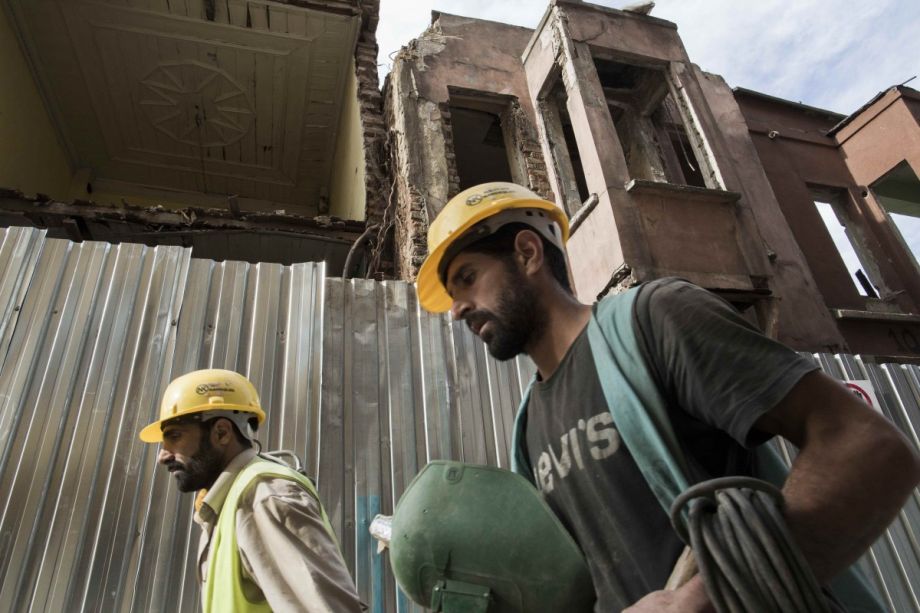 Without proper planning and management, unchecked growth threatens to turn Istanbul — and other cities like it — into a congested, polluted, unlivable place. In Forefront this week, David Lepeska dives into the neighborhoods roiled by Istanbul’s experiment in urban transformation, finding lives upended by a concrete revolution and a glimpse of the urban future.

On a gray October Sunday in Istanbul, two policemen handcuff a young man along Tarlabasi Boulevard, bundle him into their minivan and speed off beneath billboards depicting an idyllic vision of the neighborhood’s future: smiling, well-dressed couples stroll hand-in-hand amidst chic shops and smart stone apartment buildings.

Beyond the signage, a few abandoned and crumbling brick tenements rise from a construction zone encircled by eight-foot metal fencing. Down a side street, three kids kick a ripped red soccer ball and two men toss planks of wood onto a small street-side fire. A trio of young men throws softball-sized rocks at an English-speaking passerby, urging him to, “Get away! Go!”

Formerly a Greek neighborhood, Tarlabasi has in recent decades become a sanctuary for the marginalized: mostly Kurds, with a smattering of Roma, transgendered and poor Turks from Anatolia. Now some 2,000 of them have been forced out – receiving as little as a third the market price of their homes – as drug-peddlers, prostitutes and thieves have moved in. About a half-dozen families whose homes have been targeted for expropriation remain.

“It’s like an open prison,” says Bahattin Argis, a 53-year-old Kurdish cook and father of four who has lived in Tarlabasi since 1998. After years of back and forth, an Istanbul court was expected to confirm Argis’ eviction in late November, awarding him 180,000 lira ($90,000) to leave.

“I feel as if the government, they told me they would take my wife, and I said, ‘No, they cannot.’” adds Argis, who is likely to return to Mardin, near Turkey’s border with Syria. “But they just took her. If I am forced to move back to my home, I feel like my honor will have been violated.”

Istanbul was a sleepy backwater of two million people as recently as 1970. But decades of economic growth and sprawl have transformed it into an unruly megalopolis of 15 million, a city now facing one of the most ambitious – and contested – makeovers of modern times. Prime Minister Recep Tayyip Erdogan, an Istanbul native and former mayor of the city, has nearly $100 billion worth of construction projects on the drawing board.

These include a satellite city for over one million people, a multibillion-dollar financial center, a six-runway airport expected to be the world’s largest, a third bridge across the Bosporus Strait and a 30-mile shipping canal linking the Black Sea and the Marmara Sea that the prime minister himself has called “crazy.” “If you really want to reach the level of contemporary civilizations,” Erdogan explained in April, “we must make such investments rapidly.”

Some 60 percent of the recent decisions made by Erdogan’s cabinet have been about construction projects, according to a government publication. Nationwide, construction has increased five-fold over the past decade. In 2002, Turkey issued building permits for 36 million square meters of space. In 2010, the number was 171 million.

The building frenzy prodded local journalist and political analyst Yigal Schleifer to argue, in a May story for the online publication Eurasianet, that Turkey had “turned into a ‘constructocracy,’ with a domestic economy driven by the construction sector and ruled by a government that seems to believe that every new big construction project only gives it more legitimacy and prestige.”

Construction represents just six to seven percent of Turkey’s GDP, but its real impact is much greater. Building sparks activity in real estate, cars and appliances, manufacturing, finance and other sectors – though too much tends to also result in congestion, corruption, imperiled resources and a roiling population.

“Construction is now the locomotive sector, especially in Istanbul,” Mustafa Sonmez, an economist and a columnist for two Turkish dailies, said during a recent interview at his office near Taksim. “The main aim is to brand the city and sell the land of Istanbul for a higher price, to Turks and to foreign investors, and the government is succeeding.”